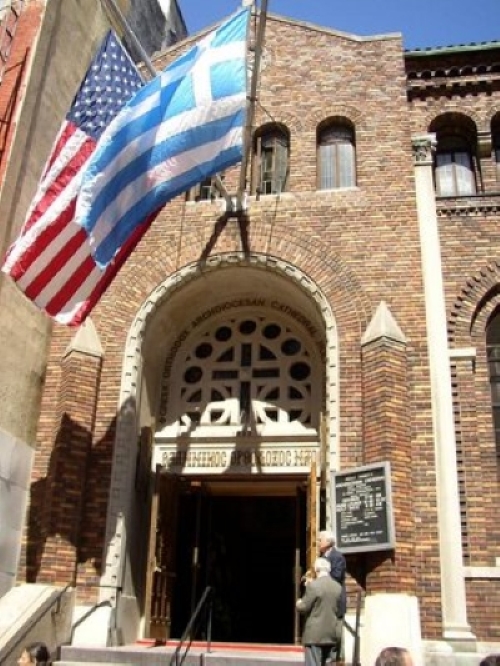 In an unprecedented historical turn of the last 45 years all institutions of the Greek-American community are simultaneously in crisis. Elpidophoros’ first half-year report is absolutely a failure. How should we prepare for the coming collapse?

In the thirty-plus years that I have been closely following our community’s affairs, I cannot remember another occasion in which all of our institutions (Archdiocese, Communities, Organizations, the Media, etc.) found themselves in such a profound and historic turning point, literally facing a total collapse. It is clear to me that the Greek-American community is at a historically crucial crossroads and is called upon to shape her own future. The big question is whether she will do so by taking her fortunes into her own hands, or if she, once again, succumb to forces alien to her own interests and let them play the leading role.

The Greek Orthodox Archdiocese of America, after decades of mismanagement and corruption, is teetering on the brink. With federal prosecutors (particularly those who have the reputation of being “incorruptible”) proceeding to arrests, everything is up in the air. The arrests of the Papadakos and Dimitriou were accompanied by “plea bargain agreements”, creating the certainty that the investigations will eventually lead to new arrests.  Investigators have a wealth of evidence in their hands and are gathering more daily – mostly new witnesses. They are aimed at the top of corruption, the “big fish”, and especially Father Alexander Karloutsos. This is all the more evident from recent “planted” news pieces in the Greek media about Yiannis Horozoglou, Karloutsos’ partner in “managing” the invitations to the White House and the enthronement of Mr.Elpidophoros.

Karloutsos’ involvement in litigation will lead to the collapse of the entire Archdiocese’s structure of operations. Not only because it will lead to the prosecution of those who have legal responsibilities and abused common resources, but mainly because the Archdiocese will now lack the cohesive element of all social institutions, trust. Without the element of trust the Archdiocese will collapse. Our prediction is that the collapse, which is already in its infancy (that is why Agios Nikolaos at Ground Zero is not progressing), will be catastrophic and we must be ready to deal with it. How?

2) The maximum degree of autonomy of our communities is not only practically desirable but it is also much closer to the original message of Christianity: Wasteful and costly hierarchies have nothing to do with the Christian message, especially when they refuse to account for their finances. We witnessed a few months ago an extreme case of mockery when the Ecumenical Patriarchate announced it will send financial auditors to our communities and monasteries at a time when it itself and also the Archdiocese and the Metropolises are not publishing, as they ought to, their financial details. Why pay, for example, $10,000 first class airfares for our Metropolitans to go on pointless trips when our communities are in dire need? Every community must make sure that its charter would never allow its assets to be controlled or returned to the local Metropolis or the Archdiocese in any occasion: The Patriarchate’s “predators” are ready to grab what generations of Greek-Americans have built with personal sacrifice, labor and generosity. They already doing it without any shame.

3) Along with the above, a collective goal for all of us should be to achieve Autocephaly from the ethically, politically and economically corrupt Patriarchate of Constantinople and, secondly, the panorthodox unity within America free of dependence on any outside ecclesiastical authority, neither Constantinople, nor Moscow, nor any other capital. This is the only way to lay the foundations for the healthy development of Orthodoxy in this great country and to achieve the economic prosperity of our communities in the future.

The above does not mean that we support the breaking of the spiritual relationship with the Ecumenical Patriarchate. The spiritual ties should remain and will be stronger when they are freed from the action of “predators”. At the same time, the financial support of the Patriarchate will continue, but with transparency at all levels and it should correspond to the financial capacity of the communities. But all decisions should be made here, as American law prescribes.  After all, there is no longer any choice for the Patriarchate. As the noose of federal prosecutors is tightening, the faithful are turning away. They, the Patriarch’s “slaves”, have lost the confidence of the flock, they are finished. The sooner they understand it the better… The more they deny transparency, the more the “numbers” will deteriorate. Is this their ultimate purpose? To completely dismantle the Church of America?

Elpidophoros’s first half year was marked by many unacceptable choices of people for sensitive positions. With the luminous exceptions of the appointment of Father Andreas Vythoulkas as Chancellor and Father Nikiforos Fakinos as secretary of the Eparchial Synod, Mr.Elpidophoros’ other choices were disappointing. The placement of Father Karloutsos as Vicar justified our nicknaming Elpidophoros as “Elpidoktonos” (“Hope-Killer”): When your first choice is to reward the “Prince of Darkness”, Fr.Karloutsos, then what future should the flock expect from your “leadership”? Many other choices that followed confirmed our worst fears: 1) The promotion of Mr. Costas Eliades as well as Mr. Koularmanis, known for their involvement in moral scandals (the first) or for blackmail and mismanagement at least (the second) in Astoria is a truly bad omen. Especially because it revealed the existence of bad advisors in Elpidophoros’ inner circle…

2) The group of “four out of the Halki” (close assistants of Elpidophoros in Constantinople), who have taken on the role of advisers within the Archdiocese, also bears no good news. They may have the confidence of Arch.Elpidophoros but they are totally unfamiliar with the Church of America and will need a long time to adjust.

Most importantly, Elpidophoros failed to deliver on many of his promises, which he loudly pronounced, as the genuine Phanariot that he is, shortly before his arrival in multiple interviews: 1) He said he would bring “transparency” but he upgraded Karloutsos instead. 2) He said that the issue of rebuilding St. Nicholas would have ended “before his enthronement”, but it ended in a postponement after postponement…. He said, he said and what did he not say… In the meantime, he confirmed those who had doubts about his possible links with the Turkish deep state by visiting Erdogan at his hotel in September and making unacceptable statements there regarding issues that are not his business.

And he also confirmed all of us who criticized his unacceptable involvement in the “Ukrainian question” bringing here Epiphany and his entourage and thus confirming the split in Orthodoxy. If one excludes some controversial “good intentions” on the subject of Greek education, the first six months of Elpidophoros’ term are a real disaster. The cherry on top is the complete absence of any effort about transparency and accountability – we only have big words so far…

In addition to the Archdiocese, many metropolises and communities are in turmoil across the country from Chicago to New York. After the sale of the Holy Trinity in Chicago, the sale of the metropolitan building is now being planned – hopefully we won’t hear any more negative news from there. The center of attention throughout the year turned to the developments in St. Demetrios of Astoria where a group of new parish council members managed to prevent the community’s school from being lost to a group of “entrepreneurs” with the help of former publisher and former undersecretary of Foreign Affairs in Greece, A.Diamataris. With the departure of former principal Koularmanis, the community and the school are on the path to renewal. The road will not be easy, but rationalization on financial and all other issues already brought the first positive results.

The political death of A.Diamataris…

The former publisher of the National Herald and former Undersecretary of Foreign Affairs for Greece (for about 5 months) Antonis Diamataris embarrassed himself and all of us with his miserable behavior and his fake MBA from Columbia…. If he had not been a true psychopath and had a trace of political sensitivity he would have avoided the atrocious political death he has suffered. He could even become a hero if: 1) He had resigned in indignation over the issue of the “voting rights” of the Greeks abroad. 2) If, when he was accused of the ownership of his businesses, he had reversed the issue and pointed to everyone that this unacceptable provision should be abolished and that businessmen should be allowed to assume government positions, as long as they step down from managing their businesses and provided that strong anti-corruption laws are in place and enforced. Why should Greece lose the experience and free spirit of so many successful entrepreneurs? And why reward the incompetent members of political families who have proven to be unable to manage not even a pizzeria?

Diamataris ultimately preferred, as he always did, to serve the political interests of his patrons, the Mitsotakis family. And so, as he surely caused great damage both as a publisher and as minister, he will be remembered in black letters in the community’s history. The media field is now open for other media – and especially electronic ones – to offer to the Greek community what Diamataris and the National Herald deprived her of for decades: independent news and keeping those in power in check, in our case the ecclesiastical authorities, the communities’ leaders and the leaders of other organizations.  Many websites are trying to fill this information gap. In the Greek-speaking press “Kalami.net” was prominent, while in the English-speaking press www.monomakhos.com and www.protectingorthodoxchurch.blogspot.com, (but the latter suddenly stopped functioning recently). In this context, our website aims to play a leading role in the exchange of opinions, criticism and independent information…