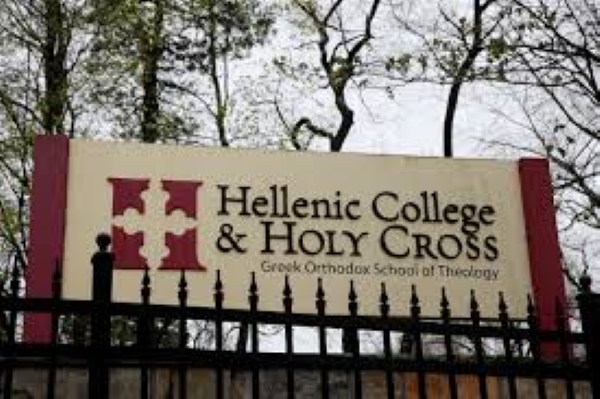 UPDATE (4pm January 8): This article was written before Arch. Elpidophoros announced yesterday evening that prime minister Mitsotakis officially offered for the Theological School of Boston 2 million euros per year starting last year!! In other he is getting now about $4.4 million in hard cash form the Greek Government under the pretext of “helping the Seminary!” What is really hidden behind this offer from a government which does not have enough to fund the Greek hospitals’ basic necessities?  Why would the Government of Greece help a Theological School which owns 59 acres of land (or 240.000 sq. meters!) in the best neighborhood of Boston (Brookline) worth anywhere between $100-200 million dollars? For a measure of comparison in recent very big news, the adjacent to the Seminary property belonging to Tom Brady and his wife, supermodel Gisele Bundschen, is only 5 acres and was just reduced to $33 million!!

Why a country which is loaded with over $300 billion of public debt (or 180% of GDP!!!) and has not resolved its own issues with mismanagement and corruption, would get involved in the perennial money pit, the Theological Seminary of Boston?  Supply of money was never the issue at the Seminary, as proved last year by the letter of the Massachusetts Dept. of Education.

I was wondering for weeks why would Archbishop Elpidophoros insist that the Prime Minister of Greece Mr. Mitsotakis accompany him to Tarpon Springs during his official visit to the U.S. (which was topped today with a meeting at the White House with President Trump).  The answer came at the end of the Greek Premier’s speech in the Church of St.Nicholas on Jan.6 in this picturesque town of Florida with the 130-yr history of Greek immigration: “Greece will support financially the Theological School of Boston”.

Where to start with this incredulous statement?  The facts stated in last years’ letter by the Massachusetts Dept. of Education clearly say that the School is operating on a deficit of about $1.5 million a year, attributed to low enrollment and many other signs of gross mismanagement (A copy of the letter here: March-13-2019 DEPT OF EDUCATION LETTER TO HELLENIC COLLEGE HOLY CROSS). Similar statements were reported a year earlier in a letter of eleven members of the Board of Trustees to Archbishop Demetrios.

The point of this short commentary is not to recount the well-known chronic ailments of a College which, many say, never had a feasible and realistic basis of existence.  What to say about drawing funds from restricted accounts which will never be returned… What to say about the falling enrollment (less than 100 students currently) which will lead to automatic discreditation… How to describe the abandonment of HCHC by the usual sources of funds, the Church’s Foundations, such as Leadership 100 (which donated over $17 million to the school over the years)… How would anyone support that the School can stay open?

Our main issue is that, once again, we are faced with the same question as in re-starting the building of St.Nicholas at Ground Zero: Without first accounting for the mistakes, the mismanagement and the corruption of the past and, in this case without having a viable plan, we embark in the new phase, foolishly hoping that things this time will be different.  How idiotic does Arch.Elpidophoros think we all are? Why does he insist to waste the precious common funds? Why would the Church and the Community apply the same failing recipe one more time?

Even if some things get “better” in this current and future phase (a very dubious statement in itself), by not accounting for the past mistakes, mismanagement and corruption we will have completely lost the most precious asset of all non-profit organizations: the trust of its members. Because of this obvious lack of trust nobody among the Community is willing to offer any donations anymore… And so, we stoop so low as to ask money from Greece, while the country is still dealing with a monumental financial and moral bankruptcy…

The ugly truth is that there is no feasible plan – it’s all “a pie in the sky”… This bottomless money pit cannot be fixed.  It would be much better if it was closed down and sold the valuable property.  As long as the sale of this property would go for the enhancement of the existing “endowment” with one purpose only: To offer scholarships to 60-80 students per year in order to ensure the education of future priests for the Church.  The Archdiocese could even make a deal with an appropriate theological school in the U.S., which could then employ a few prominent Orthodox theologians and offer low tuition costs to Orthodox students.

Greece could certainly help by cooperating for “a college year abroad” type of program (or even “two years abroad” to those who prefer) at the Theological School of Thessaloniki, an ideal place because of proximity to Mount Athos. The Greek Government could help with housing and other assistance and the students in the end would benefit greatly as, in addition to everything else, this is the optimal way to learn biblical and modern Greek, a subject so “dear” to Elpidophoros…

Alas, it is not meant to happen: It looks like the current leadership of our Church is as senseless and comatose as the previous one… Rationality was never the trait of self-serving people who believe that they are here to be served and not to serve others.  Christ’s message has been lost and it is evident by the hordes of faithful who are seeking “greener pastures” elsewhere… The continuing waste of financial resources will simply accelerate the decline…