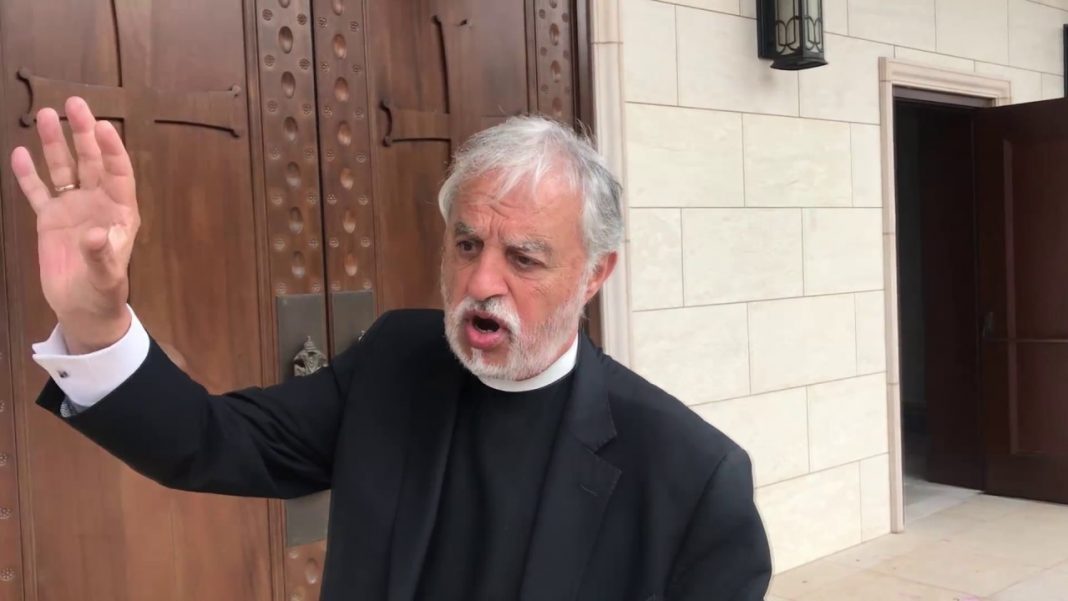 Today’s announcement by John Catsimatides in the presence of Archbishop Elpidophoros that a total of $17 million has been donated for the rebuilding of St.Nicholas in Ground Zero would otherwise be a joyous eventuality, as it would signal the beginning of the end for the story which has been an embarrassment for the Greek-American community for many years.

However, the hasty way the announcement was made, where Mr.Catsimatides could not get basic facts correctly, betrays the anxiety inside the Archdiocese regarding the ongoing federal investigation by the Southern District of New York.  Just a few days ago, it was announced that they hired power attorney George Tsougarakis, to “advice” them.  On what? They already have a legal team, and a very good one as we understand.   Hiring Mr.Tsougarakis was preceded by the establishment of  ”St. Andrew Ecumenical Patriarchal Fund” (as if we do not have 2 or 3 “Patriarchal” funds already…) – serving in essence as a “legal slush fund”… No question they will need it.  Sources tell us that just last Sunday Jerry Demetriou’s wife was overheard saying that her husband is in full “interrogation mode” by the investigators and the same was verified by other sources close to his lawyer…

Judging by the many factual mistakes made by John Catsimatides during his short speech, it seems that the whole thing was hurriedly planned and executed. First mistake:  Mr.Catsimatides mentioned (talking about Papadakos and Demetriou) that “the first one is in jail”; but Papadakos was not given a jail sentence, as the church forgave him “and prayed for his repentance”…  Second mistake: In the same sentence he said that “the second one will go to court in July”, while it has been announced that Jerry Demetriou’s Court date is on March 20th.

These factual mistakes were followed by a half-hearted attempt to “wrap up” accounting for the $38 million that had been collected before the work stopped at the end of 2017: “Of the $38 million, the $19 million went to professionals (meaning the lawyers, Calatrava and others – but exactly who?)  And what happened to the rest of the money?  Please do not refer us again to the PWC report!…  This report specifically states that Papadakos and Demetriou declined to be interviewed by PWC! But they cannot and they have not refused to answer the investigators… It is clear that the PWC report’s purpose was more to confuse the distribution of costs than to shed light in the whole situation… The opposite is true for the ongoing investigation by the Southern District of New York. Should we remind everyone that this was the U.S. Dept of Justice unit that took down John Gotti?  Finally, would anyone please tell us how much was Fr.Karloutsos’s “commission” out of the $38 million?

Regarding the Spanos Foundation $10 million donation, it’s doubtful that Alex Spanos himself, a very smart businessman, would get involved in such a situation (if he were alive) at the same time as a federal investigation is continuing.  A prudent leadership of any foundation would wait until the legal case is over before donating any money. Especially when they know that the same “shady figures” who “mishandled” the money (Karloutsos) are still involved – as if nothing has happened! Let’s not forget that the Spanos Foundation had donated $6 million previously to the “St.Nicholas Fund”. Why would they give more without any assurances?  Also, why don’t we know who donated the rest of the money ($7 million)?  Is this the “new transparency” by Elpidophoros?

Finally, even more suspicious is Catsimatides’ reference to a retired FBI director in New York, George Venizelos, a close friend of Fr.Karloutsos, as someone who is going to “put an end to misinformation”… Who are they really kidding? The faithful have federal investigators working for them!  I have never seen a more ludicrous, a more pathetic attempt to scare any voices of criticism… Should we expect that they will now turn against The National Herald, the main source of misinformation the last thirty years?  Could anyone please, please provide for all of us to see, one sentence, one quote, just one word TNH wrote against Fr.Karloutsos during the last three decades? It’s clear then that Mr.Venizelos has his work cut out for him… They are all just laughable in their ineptitude…