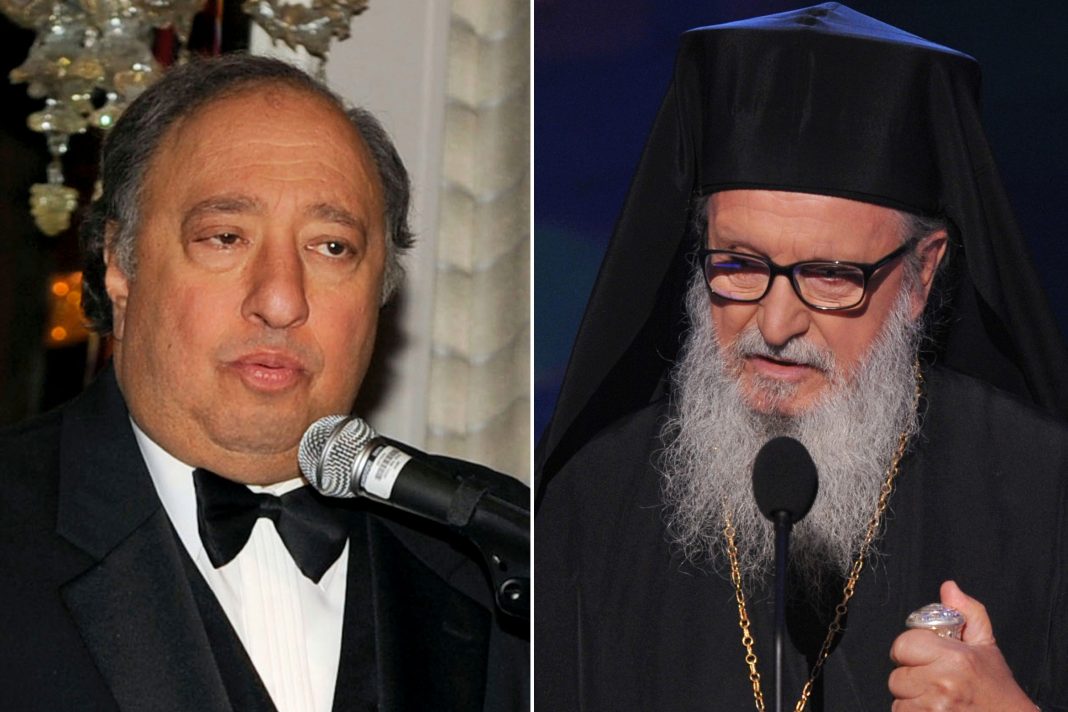 Two weeks after he was caught on video to misrepresent the facts and threaten the whistleblower of an ongoing criminal federal investigation and the press, the V.P. of the Archdiocesan Council, John Catsimatidis, repeated his threats of a lawsuit against those who are exposing the damaging facts of corruption in the Archdiocese and the related non-profit organizations.  It was an attempt to scare all those who dare to stand up to him and his billions, to his “Koumbaro” Karloutsos with his history of corruption/arrogance/hypocrisy and to all others who form a network of self-serving business deals, undermining GOA. All those who do not have much to do with the Church of Christ, but have everything to do with making (and hiding) money within the Church and in the name of the Church… As I have said before, it would be better if they formed an exclusive country club…

But let’s take Catsimatidis’ missteps one by one in today’s interview (excerpt at the bottom).  Today we will focus on his attacks against the Freedom of the Press, leaving for another day the illegalities concerning the donations from “Faith Endowment” and “Leadership 100”:

It’s plain as daylight that he did not consult his lawyers… As a graduate of the Law School of the University of Athens at the top 10% of my class (yes, the law is the law anywhere in the world – despite procedural changes and differences in general jurisprudence), I would invite him to take some of the free legal advice above.  I am not sure if he was referring to my writings – he did not mention names (smart move – it delayed a possible counter lawsuit)… But just in case he was referring to me personally, I would like to invite him – and all the readers in the Greek American community – to take a look at my “short bio”, showing an education that includes, in addition to the Law degree, an M.A. and a Ph.D (and yes, they are not fake…)… Here is the link in Greek and here you can see it in English… (SHORT BIO-English)

PS. Someone please rush a dictionary to Mr. Catsimatidis… It looks like he does not understand a few of the English words I used above…

PS 2. What happened to George Venizelos, former FBI of NY director and now Catsimatidis’ chief of staff? We thought that he was the one who would take care of the “bad” press people… Mr. Venizelos knows better – and if he doesn’t know I am sure his former FBI colleagues explained to him exactly the limitations of his position.  Unfortunately this was one more careless “misstep” by the hopeful candidate for mayor of NYC…

HERE IS PART OF HIS INTERVIEW IN TNH…

TNH: How are things going at the Archdiocese?

John Catsimatidis: Some low-life people are writing negative conversations on Web Sites about me, Fr. Alex, the Archbishop, and the Archdiocese, I have made a decision we are going after them.

TNH: In what way?

JC: Legally. They have a very-very bad reputation themselves.

TNH: When do you plan to file the lawsuits?

TNH: Are you going to sue them on behalf of the Archdiocese?

JC: I am suing them on behalf of myself, my friends. I will be paying the lawyers; the Archdiocese will not be spending any money.”

TNH: Have you hired the lawyers?

JC: We have top lawyers.

TNH: What is making you do this Mr. Catsimatidis?

JC: Because I believe in our Church; I believe in the Archdiocese and people that put out false information on the Internet should be held accountable. The way to hold them accountable is that you force them into court and they have to repeat what they said under oath. All the stuff they are saying it is grossly wrong.

TNH: Are you also going against the internet companies?

JC: It is up to lawyers. We are defiantly going against the individuals.