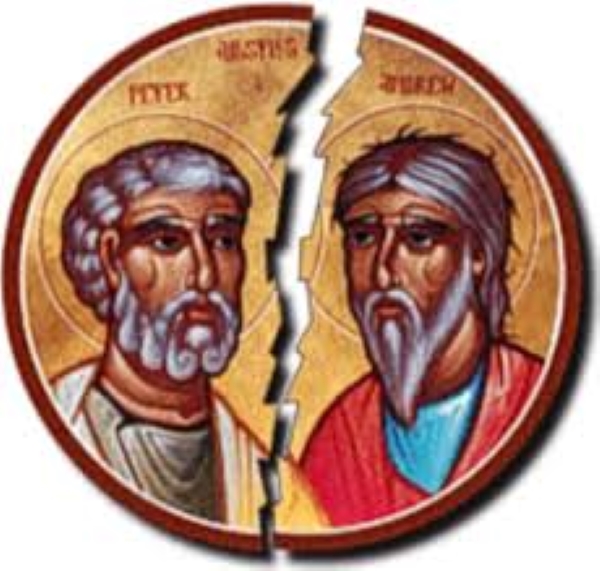 The ecclesiastical issue of Ukraine and on its behalf, the Ecumenical Patriarchate’s recognition as an autocephalous Church of this country’s schismatics has caused the breakup of Orthodoxy. It is a very serious pastoral, spiritual and ecclesiastical problem that has direct detrimental effects on the outward image of the Orthodox Church.

These days that Orthodoxy is undergoing are historically negative. The burden falls on the Primates of the fourteen local churches, who are responsible for the wrought situation. It is regrettable for those primates of the fourteen local Orthodox churches that they do not have much biological leeway to see Orthodoxy united again. We remind their ages: Bartholomew of Constantinople age 80, Albania Anastasios of Albania age 91, Irenaeos of Serbia age 90, Elias of Georgia age 87, Ieronymos of Greece age 82, Savvas of Poland age 82, Neophytos of Bulgaria age 75, Cyril of Russia age 74. The rest are under age 70.

As we have written in previous texts, the US has long sought to bring Ukraine under its complete influence. In this pursuit of theirs for two years now they have intensified the use of schismatic Orthodox Christians, anchored in pro-Western Ukrainian national power. This is now being done overtly. In the newspaper “Ta Nea (The News)” on February 10, 2020 the newspaper’s correspondent in Kiev and a supporter of the state Church of schismatics Kostas Onisenko writes that its leader, Metropolitan Epiphanios announced the establishment of two institutions. And he adds: “Among those who have directly expressed support for the institutions is US Secretary of State Mike Pompeo, who was in Kiev last week” (page 53). As the correspondent writes, one institution will provide organizational and other assistance within the Church and will be involved with humanitarian work. The second institution will deal with the communication of the Ukrainian Orthodox Church (UOC) with citizen organizations, private and public institutions of Ukraine and abroad. Apparently, the unfortunate Americans of the Orthodox Tradition perceive the UOC as an enterprise that needs clientele and, therefore, neutralizing competition…`

It is true that through their secular power the bureaucrats of the US deep state believe that their “culture” must be imposed on the entire Christian world. They see non-Americans in culture, like the cowboys saw the Indians in the 18th and 19th centuries, and seek to “civilize” them. For the Ukrainians, they believe that they have to break away from their Slavic tradition and “modernize”, as the Croats and Poles did previously… They do not understand and do not want to understand what Ukraine means to the Russians.

Helene Carrere d’Encausse*, of Georgian descent, a lifelong secretary of the French Academy and historian, in an interview with Le Point magazine (Issue 2247, 1 October 2015, p. 93) said: “For Russians Ukraine is the same in essence with Russia… Yeltsin when discussing in Belovezha** the future of the three countries (Russia, Ukraine, Belarus) was pleading for unity between them. For this unity Yeltsin did not raise the issue of Crimea to pass under Russia, since it had nothing to do with Ukraine. At the prompting of his advisers, he responded that the leaders of the three countries should be united to the end and if he raised the issue of Crimea he was afraid that Ukrainian President Kravchuk would depart…”. When Yeltsin went to Paris in 1988 to present his book, d’Encausse asked him, “What is happening with the Empire?” And he replied to her: “The empire is disintegrating. I know we must dismantle it, but we must at all costs save the unity of the three Slavic nations.” And d’Encausse comments: “For Yeltsin Ukraine is the cradle of Russia and Belarus, it is white Russia … It is impossible for us to separate he told me.”

The expectation of the Ecumenical Patriarch, the Metropolitan of Pergamon Ioannis and the Metropolitan of UOC Epiphanios is that someday the matter will be over, everyone will accept the fait accompli of the Fanar and unity in the Orthodox Church will be restored. Indeed, in the aforementioned reporting from Kiev it is written that Mr. Epiphanios stated that he expects in 2020 to be recognized by other Orthodox Churches after the Patriarchate of Alexandria and the Church of Greece.

The problem is not simple. In major contrast to recognition by other Churches is the resilience and persistence in their traditional faith of the Orthodox Ukrainians. Despite the war for churches to break away, by force essentially, from the canonical Church and for Hierarchs, priests and faithful people in it to accede, the results for Mr. Epiphanos and his supporters are disappointing. He himself reports that of the 12,000 parishes of the canonical Church, 600 have been annexed. According to the canonical Church there are less than 300. The title and the reporting of the Roman Catholic news agency – website Portail Catholique Suisse (cat.ch) of December 4, 2019 is characteristic. It writes: “The new Ukrainian non-canonical Church remains a very small minority,” and notes that 220 parishes were illegally annexed to it and only 78 willingly.

Also, on December 16, 2019, the Catholic Center for Mass Media (Cath-Info) has extensive reporting on the Ukrainian ecclesiastical issue, entitled “Against Constantinople the Orthodox Church of Ukraine Endures”. The report cites the pressures its clergy and faithful people receive and the approaches attempted to overtake parishes. But instead of the Church of the schismatics developing, it was struck from within, with Filaret’s distancing himself from it and his revival of the “Patriarchate of Kiev”…

The Fanar’s assessment of the solution of the ecclesiastical issue of Ukraine is obviously incorrect. As we explained above, for the Russians, Ukraine is not Estonia. And if all the Churches gave way to accept the action of the Ecumenical Patriarchate, the Russian Church will NEVER accept it. It would be like betraying its people, when even in Ukraine the great majority of Orthodox people stand by her side. But at present NOT ONE other Church seems to be standing with recognition of the schismatics.

Ecumenical Patriarch Bartholomew is in a difficult position. Of the “ecclesiastical leader of 300 million Orthodox,” as the Fanari puts it, today he represents about 25 million… And he does not express the unity, as he himself claims. Everything but. Although capable of many things and important work within the Archdiocese of Constantinople and in the Metropolis of Imbros – Tenedos, if nothing changes dramatically, he will remain in Church History as the Ecumenical Patriarch who provoked a schism in the Orthodox Church. Mature, he is obliged to think and reflect on what his Elder, Metropolitan of Chalcedon Meliton told him during his ordination to the Diaconate. The following were said at the Naidrio of the Holy Theological School of Halkis, October 19, 1969:

This moment is a time for deep reflection and additional silence and not for words. Therefore, I will tell you only one thing: You come to receive Grace. This is most important. This is the decision until the end. But for this to happen, you must be vacant to give place to Grace.

Sin and wickedness are multifaceted, but the root of sin and wickedness is our “ego”, self-love, self-interest, pride, and in particular spiritual pride. Protect yourself from these. Empty yourself. Humble yourself. And above all, give place to Divine Grace. And remain for life, until the end, until the final word of the Lord, favored before God, favored before men. Amen”.

There is no reason for the current text to deal with Patriarch of Alexandria Theodoros and Archbishop of Athens and All Greece Ieronymos and their legacy. People in this life have secured their tranquility and are warmly praised by American officials and the Ecumenical Patriarch…

Some Metropolitans express the hope that the successors of today’s Primates will restore unity to Orthodoxy and restore to it the prestige it requires. Hope is a virtue for the Christian, which springs from his Faith. One Metropolitan asserts that the divisions and schisms in Orthodoxy are proof that it is the true Church, which is being fought by earthly and transcendental forces, but, he added, “the Lord has assured us that gates of Hell will not overpower it”.

**In Belovezha, Belarus, on December 8, 1991, an agreement was reached between the leaders of Russia (Yeltsin), Ukraine (Kravchuk) and Belarus (Suskevich) on the regime governing these Slavic countries following the collapse of Soviets.