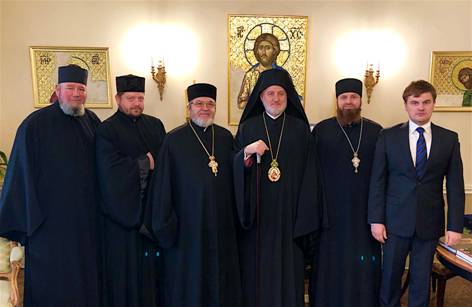 EDITOR’S NOTE:  Judging from the number of furious phone calls and emails we have been receiving since this morning, today’s announcement about the creation of a “New Vicariate for the Orthodox Christian Communities of Slavic Tradition” is bound to create a new turmoil among the faithful.  Recognizing un-canonical Slavic orthodox churches (they were demoted from the Russian Church ROCOR) is not a way to achieve Panorthodox unity in America, but rather a certification of full schism and heresy.  Does Bartholomew and Elpidophoros realize that the other side of the coin is also very near? Many Greek Orthodox parishes are reaching the boiling point, with the chronic problems of transparency and accountability and the even more onerous requests for annual contributions by the Archdiocese.  Metropolitan Nicholas of Detroit went public with his outrage, and no arm-twisting or retraction will ever quell the snowball effect that his act of resistance has started.  Other Metropolitans will soon be looking for ways to express their dissent.  But at the grass root parish level, as each parish is a separate non-profit corporation, is where the explosions are bound to happen…  For the arrogant Phanariots, this seems to be a consolidation of power, but they are foolish to believe they are achieving anything more than the erosion of their already diminishing hold on the Church of America.  There will be no Church for them to “lead” anywhere… Because the people will leave them in droves, as they do now..  Do they care about the people at all or they just want to sell any valuable property and vanish leaving behind them rubble?

THE FOLLOWING IS A REPORT FROM ORTHOCHRISTIAN.COM

Yesterday, Monday, March 9, Archbishop Elpidophoros of the Greek Orthodox Archdiocese of America announced the creation of a Vicariate for the Orthodox Christian Communities of Slavic Tradition, reports the Archdiocesan website.

This step was undertaken with the blessing of the Patriarchate of Constantinople, the report indicates.

The vicariate is currently made up of 3 communities: St. Matrona of Moscow Cathedral in Miami, St. Nicholas the Wonderworker Monastery in North Fort Myers, Florida, and St. John the Forerunner and Baptist Cathedral in Brooklyn.

On February 5/18, the Holy Synod of ROCOR resolved to defrock the former archimandrite Alexander Belya, who is in control of both the St. Matrona and St. Nicholas communities.

Alexander was known to dodge diocesan dues and to bring clergy to America without the proper paperwork, and his younger brother Ivan has been implicated in the trafficking of women. This past summer, Alexander also forged a letter from His Eminence Metropolitan Hilarion (Kapral), the First Hierarch of ROCOR, attempting to get himself confirmed by the Holy Synod of the Moscow Patriarchate as a bishop-elect for ROCOR in America.

However, as the ROCOR Synod had already dropped his name from consideration, he was not confirmed to become a hierarch.

In his “pastoral word” preached on Sunday, October 13 and published on the sites of both the St. Matrona Cathedral and the St. Nicholas Monastery, Belya states that the Greek Orthodox Archdiocese of the Patriarchate of Constantinople has taken control of the parish and he has retained the priesthood and the right to serve. He has since been canonically defrocked by ROCOR.

In November, his father, Archpriest Alexander Belya, rector of the ROCOR St. John the Forerunner Cathedral in Brooklyn, also departed for the Greek Archdiocese without a canonical release from his hierarch. He is currently under suspension from the ROCOR Holy Synod.

Archpriest Vasiliy Deyak, Protodeacon Rostislav Zadorozhnyy, and Deacon George A. Hero are all clergy from the Cathedral of St. John the Baptist in Brooklyn who followed Fr. Alexander Belya into GOARCH.

Although Archpriest Ioann Spasyuk began his career as a canonical priest, he has a long history of involvement with a number of schismatic groups.

Hailing from Belarus, he initially served as a priest in the canonical Belarusian Church in the village of Pogranichny in the Grodensk Province. Around 1991, he left the canonical Church and declared himself Locum Tenens and Chancellor of the “Belarusian Autocephalous Orthodox Church,” which he later renamed the “Belarusian National Church.”

He was elevated to “mitred archpriest” by “Archbishop Yuri Rizhy of the “American Global Patriarchate.”

He was canonically defrocked by the Belarusian Exarchate of the Russian Orthodox Church for persisting in schism.

In 2002, he moved to America, where he joined another branch of the unrecognized “Belarusian Autocephalous Orthodox Church” headed by “Bishop” Alexander Sologub of Hyland Park and Borisov. On April 5, 2002, Spasyuk was declared defrocked by “Archbishop” Yuri Rizhy in Belarus.

At some point, Spasyuk became associated with the schismatic “Russian Orthodox Church Outside of Russia-Agafangel (ROCOR-A),” which refused to reunite with the Moscow Patriarchate in 2007. In 2016, a parish of the Archangel Michael opened in Hallandale Beach, Florida, with Spasyuk as rector.

Hallandale Beach is only a 15-minute drive from Belya’s Church of St. Matrona in Dania Beach.

While the Greek Archdiocese has taken in the Belya family, OrthoChristian has been informed that His Eminence Archbishop Michael of the New York-New Jersey Diocese of the Orthodox Church in America has directed all of his clergy to recognize the canonical defrocking of former archimandrite Alexander and to not allow him to serve in any of their parishes.

BELOW YOU CAN SEE THE OFFICIAL ANNOUNCEMENT FROM GOARCH.ORG

ARCHBISHOP ELPIDOPHOROS ANNOUNCES THE CREATION OF A

New York – On Monday, March 9, 2020, following approval of the Mother Church of Constantinople last November after the request of the Holy Eparchial Synod, His Eminence Archbishop Elpidophoros, Primate of the Greek Orthodox Archdiocese of America and Exarch of the Ecumenical Patriarchate, announced the creation of the Vicariate for the Orthodox Christian Communities of Slavic Tradition.

Archbishop Elpidophoros has appointed Very Rev. Archimandrite Alexander Belya as the first Vicar of the Vicariate.