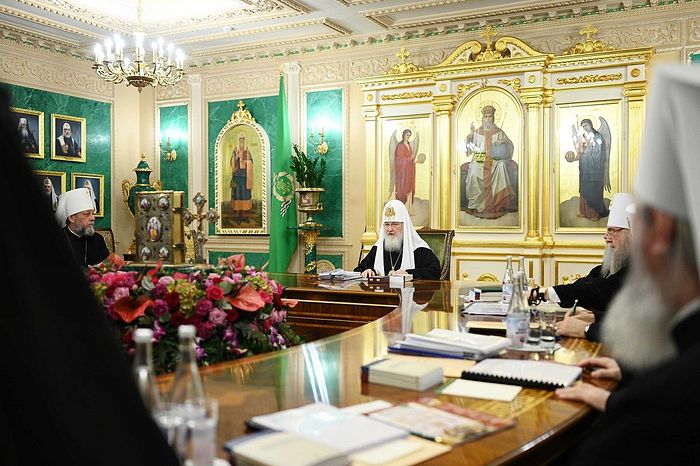 EDITOR’S NOTE:  For the last few years the battle between Constantinople and Moscow for the dominance of Western European Orthodox Churches has been raging.  It intensified after last year’s Schism, whereby Moscow does not recognize Constantinople and it was recently transferred across the Atlantic to America with the institution of a new “Vicariate for Slavic Churches” by AB Elpidophoros (please read here the excellent presentation and analysis by George Michalopulos of “Monomakhos”).  Today, Moscow answered by announcing the election of Vicar Bishops for Western Europe…

BELOW THE REPORT BY ORTHOCHRISTIAN.COM

The Archdiocese of Russian Churches of Western Europe, under His Eminence Metropolitan John of Dubna, will soon have two new vicar bishops. Until late last year, the Archdiocese was under the Patriarchate of Constantinople, which refused to allow it to elect new bishops to help the aging Met. John.

Meeting under the chairmanship of His Holiness Patriarch Kirill of Moscow and All Russia in Moscow yesterday, March 11, the Holy Synod of the Russian Orthodox Church considered the issue of approving the two previously-elected candidates for vicar bishops of the Archdiocese, reports Patriarchia.ru. On January 24, the Archdiocesan General Assembly elected Archimandrite Syméon (Cossec), the abbot of the Monastery of St. Silouan in Saint-Mars-de-Locquenay, France, and Igumen Elisée (Germain), the rector of the parish of the Holy Trinity in the crypt of the St. Alexander Nevsky Cathedral in Paris.

Met. John then sent a letter to Pat. Kirill, asking the Holy Synod to confirm the elections. Frs. Syméon and Elisée were previously approved by Pat. Kirill as candidates for the episcopacy before the General Assembly in January.

The place and time of their consecration is left to the discretion of Pat. Kirill.

The Holy Synod also approved changes made to the Archdiocesan charter at its January Assembly.