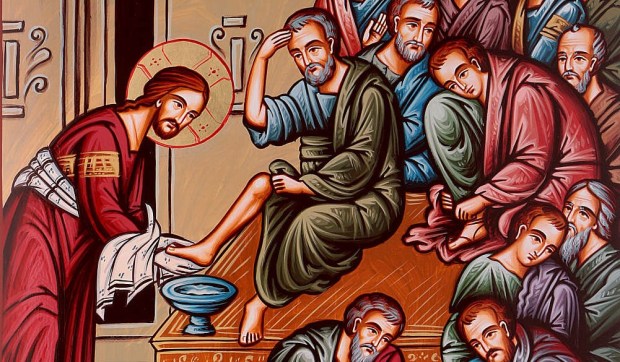 When Archbishop Elpidophoros submitted an encyclical regarding COVID-19 to his faithful on behalf of the Holy Synod of the Greek Orthodox Archdiocese of America, what I found more scandalous and tragic than the pandemic itself was the judgmental and self-righteous voice from so many “faithful” (both clergy/hierarchs and laity) who spoke against those who were afraid to approach the chalice because of fear of catching a disease or spreading it.

Among the most troubling comments I’ve seen are: “If you believe that you will get sick by partaking of Holy Communion, you are in sin and should not approach.” And another: “How can you believe that the Body and Blood of Christ can make you sick?”

Are these really the kinds of comments that lead us to God? Is the pandemic some sort of spiritual contest where we need are going to prove to the social-media world just how much more faith we have than others?

Now, before I go on, let me affirm that the Body and Blood of Christ cannot make anyone sick. We believe and confess that the Body of Blood of Christ is the medicine of eternal life. This is true because of His mercy and love for us. The Eucharist, like the love of Christ, is also a medicine that subdues arrogance. As Christians, we must show the world that we are the Church for all people of faith. Those with strong faith, those with no faith and those who struggle with faith.

When the Lord resurrected from the dead, He appeared to Mary Magdalene just outside His tomb. When Mary went to touch Him, the Lord said, “Do not touch me for I have not yet ascended to my Father.” But when He appeared to the apostles, Thomas, the chief among doubters, was told that they had seen the Lord. Thomas responded and said, “Unless I see in His hands the print of the nails and put by finger into the print of the nails, and put my hand in His side, I will not believe” (John 20:25). The Lord appeared to Thomas even during his doubt. How profound that is for all of us! He appears to those who doubt because of His love and compassion and we are told to “not be unbelieving but believing.” He appears to us in the chalice and we still can approach and touch Him through the Eucharist even if it is done privately for those who are afraid for the time being while challenging the recipient to pray for their doubt or fear.

We must remember the first Eucharistic gathering or the first “Divine Liturgy” in the Last Supper. Did Christ now allow Judas, the one who was going to betray Him, to partake of His Body and Blood? Did not the Incarnate Son of the Living God know that Judas was going to betray Him and yet He still allowed Him to partake? He even washed his feet! Did He ask Him to leave the presence of the Last Supper? No, He did not.

Can you imagine the pain and anguish of the person who is afraid to approach the chalice? Do you think that people who struggle with this actually feel good about themselves? Do we want those gripped by fear to feel like outcasts? Do we not see that when we criticize, we make matters worse?

Did the Lord rebuke the woman with the issue of blood when she approached to touch Him (Mark 5:25)? Did she touch the fringe of His garment while bleeding or did she wait until the bleeding stopped?

I refuse to believe that our Lord and Savior Jesus Christ would ever tell someone who is faithful in so many ways but struggles with approaching the chalice because of fear of disease, “Stay away because of your lack of faith.” This is not the Christ we worship and adore.  The Lord we worship and adore is the One Who says one thing to all peoples regardless of their faith and their sin, “Come to me my child.” A person who is faithful, prayerful, church-going, feeds the poor, visits the sick and imprisoned but who struggles with this one thing—fear to approach the chalice during a pandemic—should not be beaten up by more zealous members of the Church, whether lay or clerical.  No one should publicly equate someone else’s fear with sin. Yes, our Lord said time and again, “do not be unbelieving but believing.”

In my estimation, one of the most profound passages of Scripture is found in the Gospel according to Mark 9:23-25. When a man brought his son, a demoniac, to be healed by the Lord, the Lord said to the father, “If you can believe, all things are possible to him who believes.” But the text continues, adding the greatest prayer in all of Scripture–the father of the child cried out and said with tears, “Lord, I believe; help my unbelief.” As a priest, I often recite this prayer when I leave a prison or a children’s cancer hospital. My faith in those situations, to be honest, is rocked to the core.  I offer this prayer repeatedly throughout the day.

How did the Church of the New Testament grow from eleven apostles to hundreds of faithful who were baptized? It is because the early church was a community of unconditional love and mercy in the face of revenge and punishment. It was a community of forgiveness, patience and compassion.  This is what converted so many to believe in the ONE Who is Most Merciful, Compassionate, and Loving. The non-believers were converted because they witnessed a community of love, mercy and forgiveness no matter what. Yes, indeed, miracles did help with converting non-believers to believe in the Gospel of Christ, but let us be honest, the most moving experience we have whether as a believer or not is when we are truly forgiven and embraced by the one we have sinned against. We are loved into the Kingdom of God not feared into the Kingdom.

Fr. Elias Villis is priest at the Greek Orthodox Church of Our Saviour in Rye, New York and chaplain for Fordham University’s Orthodox Christian Fellowship.

Public Orthodoxy seeks to promote conversation by providing a forum for diverse perspectives on contemporary issues related to Orthodox Christianity. The positions expressed in this essay are solely the author’s and do not necessarily represent the views of the editors or the Orthodox Christian Studies Center.