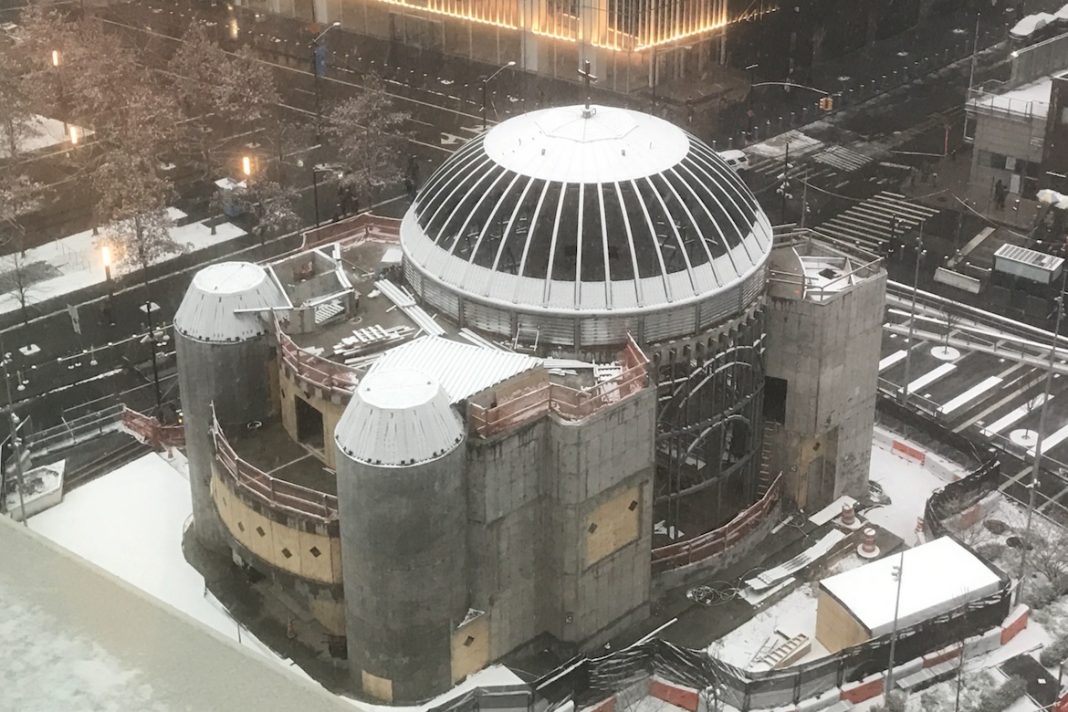 As Greek Orthodox, we did not expect and do not understand why our AB would favor the excessive spending on the shrine project when there are so many disparate and desperate needs which require immediate attention at the Archdiocesan level.  In reality we women and men, the sturdy families, homeworkers, food cart vendors, office, machine shop workers and small business owners are herded and besieged to contribute to a concrete structure on a postage stamp sliver of ground which has absolutely no relevance to our faith except to those Guarantors.

A week or so ago, our highly regarded pastor read a letter from our esteemed AB Elpidophoros asking that the rank and file members of the Greek Orthodox Church contribute toward the completion of St. Santiago Calatrava Shrine, formerly known as the St. Nicholas Shrine.

I say OXI to these subtle requests as articulated by our hierarchy and clergy.

I say OXI toward building an American Taj Mahal open to all faiths to “own” a niche space to propagate their own religion.

I say OXI to an effort to build a “sanctuary” with contributions of dimes to dollars from Orthodox brethren whose own parishes are struggling to stay solvent.

I say OXI to a blasphemous effort to spend hard earned money on a structure whose only sustainable relevance and survival will be at the mercy of walk in foot traffic and tour buses.  Just think, and think hard!  Our wonderful Guarantors who have put strenuous long hours and efforts to achieve their millions and even billions are now willing to follow their pied piper dream are leading this infamous charge.

I say OXI because the Greek Orthodox laity have not had an opportunity to discuss, let alone vote on these huge unconscionable expenditures.  For our wealthy, it’s a no brainer, money leads to actions and then for us, people with ears to the ground and eyes to God, we are expected to remain silent, tame and subordinate acceding to any direction their theoretically successful minds direct us.

I say OXI because if, you and I dear people in the pews, keep our money in our wallets and purses, guess what, our wonderful Guarantors will have to step up and complete the funding on the “tour bus” St. Calatrava Shrine.

I say OXI to the St. Calatrava Shrine because after the expenditure of substantial millions toward its completion, will our generous Guarantors stand together afterwards and undertake the enormous problems and huge debts of our church institutions and the upkeep and maintenance on the Shrine itself?

So when as the real problems of our beloved church become abhorrently visible and spiritually painful, will we see our revered Greek Orthodox faithful stand up with gumption on the pews, shouting and screaming for logical, ethical solutions to curve the failings of the last 25+ years?

So far, the only Church comeback is the continued exorbitant spending on the St. Calatrava Shrine.  This is some pyrrhic victory!

So what person, what group is set and prepared to offer a solution to our Church’s problems?  No one!  One would think our Patriarch would send us, the Greek American Orthodox Church, an AB who was groomed and who knew of our problems.  As I wrote previously, the learning curve for someone who has lived distantly away from the American GOC may be unable to unravel or master the delicate state of our Church, even for an educated and erudite prelate as our AB Elpidophoros.  In the ordinary process of the solution to our critical status, all promotions in the Orthodox faith above the clergy level is to throw the candidates in the pool not knowing if, they are capable of swimming.  So what if, they don’t swim or paddle, once they receive the appointment,   they are in office for life.  These members of higher clerical office have absolutely no allegiance to the faithful as they had no voice in their promotion as they had in the early days of the church, but now, we faithful are expected to remain tranquilized and silent for fear of being reprimanded.

As I have previously written, Bishops should be retired at age 75, unless asked to stay for 5 more only, and all Bishops tenure should be on a 5 year retainable status.  Believe me, we would then have a corps of Bishops the best ever.  These remedies would invigorate, excite and advance the Orthodox faith.  But guess what!  Is there any hierarchical person in all of the realm of Orthodoxy who would attempt, to gracefully or aggressively lead the charge?  None, as our youth and our adults are gleefully skipping away from the faith.  Who will be the first to say that our clergy should consist of only American born or those with American citizenship?

Did I hear someone say Karakas, you are way off base, a simpleton, a real jerk, how dare you criticize our beloved church and hierarchy?

Phew, that was enough!  Ok, so who would you entrust or elect to correct, solve the problems of our beleaguered church?  The people who put us in this ambiguous, no win position?  No!

I have NO confidence in the Archdiocesan Council.  This body has NO credibility and are intent to vote yes on any proposal the AB offers.  I have NO confidence in our Greek American Bishops and Metropolitans, except Bishop Nicholas of Detroit.  Bravo to him!  With the power our Metropolitans have, a just average faithful would think they would speak up and out about the shape in which our American Church is currently.  If they do speak out, are they more concerned about being ostracized, demoted, fired or severely criticized as two of our Bishops recently were?  Catholic Bishops speak out, take the heat for doing so and survive.  If you have read this message to this point, please continue.

I have NO confidence in the Synod of Bishops whose primary purpose is to forge a union of all the Orthodox ethnic jurisdiction.  Ha!  These guys are more busy trying to reserve their seats in heaven than working to achieve love and unity on earth.

While his Eminence has been investing an inordinate time on the Shrine project, he has been conveniently ignoring the Makris matter which has resulted in a lawsuit against the Archdiocese.  The GOA general reaction to its sex abuse, immoral sexual problems or any for that matter is to deny, threaten and be quiet as these matters will “correct” themselves over time.  The presumed perpetrator Fr. Makris, for him or for the abused women, no real spiritual court. Also for Fr. Makris, no reprimand and still yet, no deportation to Mt. Athos to atone for his egregious sexual violations against the two GO nuns.  Instead, he is freely allowed to return to his regular work assignment.  (For outside media reporting on this matter, see nypost.com/2020/03/20 “Nuns Sue Church”).

So what does this tell us loud and clear?  First the clergy closes ranks and staunchly supports their own within the brotherhood, a sort of don’t ask don’t tell philosophy or as they say in jail “nobody talks, everybody walks”.  Next, the clergy does not support nor abide by its own rules whereby, all sexual abuse cases must be brought before a spiritual court and heard.  Third, can you dear reader read into these actions a profound and offensive manner of the clergy (men) against women?  The very ones who walked with and nurtured Christ and literally carried the church on their backs for thousands of years.  So even now in the 21st century, this is a church still tightly and entirely ruled by men.

Then too, the Greek Archdiocese has pronounced on several occasions that “everything is in order” financially and socially.  How can one address and answer to these apparent falsehoods?  We in the pews read and view on the web, news where there is now great concern in the firing of three members of its staff.  Among this news, we hear comments that HCHC, our GO gem of ministerial learning is struggling financially again.  All this with the cancellation of the Orthodox Observer in the print edition.  This has all the ingredients of a Promethean Theme.

So how is our Church, it’s esteemed AB and the Guarantors, in the mist of raising funds to complete the extravagant Calatrava Shrine going to exonerate and justify their efforts, when there are so many other more pressing, grave and momentous financial needs for our deteriorating Church structure?

The answer dear Guarantors is to sell our rights to that postage size sliver of ground.

Another reason to sell the Calatrava Shrine is to consider the effect Covid-19 will have on the finances of our Church.  If contributions were low yesterday, they will be much lower now and in the foreseeable future.  This is something to seriously ponder…

I faithfully and humbly leave you with Ezekiel 37:12.  Which describes a promise that God makes to the exiled Judean community who have lost everything:  Their land, their temple, their holy city of Jerusalem and their monarchal leadership.  To a dispirited people exiled to Babylon and Egypt, to a people with little reason for hope, to a community scattered and dispersed, God promises this, a renewal and new life through the given spirit that will once again be breathed into a listless seemingly dying people.