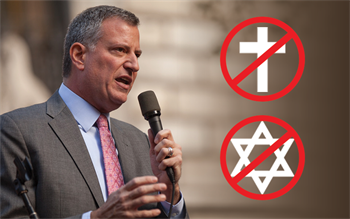 Mayor Bill de Blasio (D-New York City) remains in the headlines for, among other things, telling churches and synagogues that he will permanently shut them down if they don’t comply with government guidelines telling people not to gather as a way of combating the coronavirus.

Legal experts have told OneNewsNow that if bans such as these are temporary and involve many faiths, they are permissible. However, the “permanent” part is what attorney and U.S. Senator Josh Hawley (R-Missouri) views as unconstitutional. Hawley said as much during a recent interview on the radio program “Washington Watch with Tony Perkins.”

“Obviously, we want people to take precautions,” the first-term Republican lawmaker stated. “My home church in Missouri is abiding by the health recommendations and requests and mandates of local health authorities, including not having Bible studies, just as a precaution.

“That is very admirable and the right thing to do,” he continued. “But this idea that an elected official could threaten to use executive power to permanently close churches is insane and unconstitutional.”

Tony Perkins, host of the radio program and president of Family Research Council (FRC), went on to say that de Blasio could have misstated his intentions, meaning he was only going to close places of worship during the duration of the coronavirus crisis.

“But he’s been asked to clarify and he has not,” he pointed out. “My opinion, as I’ve been working with government officials to try to get churches to comply with the orders: I actually [this] think this fans the flame of non-compliance because it shows that he goes beyond the crisis to something else – and that is hostility to religion.”

FRC has published a webpage titled “COVID-19 & The Church.” It features, among other things, links to ideas and resources for churches on how they can still minister without having on-site in-person services.

Perkins to pastors: ‘Don’t be foolish’ about bans on gathering