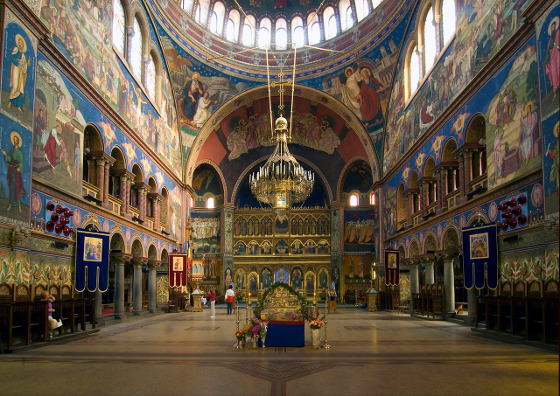 EDITOR’S NOTE: One more example that “when there is a will there is a way”…  On Palm Sunday, St. Irene Chrysovalantou in Astoria offered limited service and gave us the opportunity to suggest a number of ideas, so to preserve the most symbolic aspects of our faith, while at the same time preserving public health:  Having an early Easter Service, so to allow the faithful to pick up the holy light one-by-one (one per family)  in the same order they use in supermarkets and drug stores and liquor stores; or using the many big empty parking lots in the suburbs for drive-in services for this one exceptional occasion…  The Romanian Orthodox Church offered another idea below… How about the GOA? Is anything planned in terms of real leadership? Or we are just “awaiting the barbarians” to arrive, when the investigators announce their next indictment?

The Ministry of Internal Affairs of Romania, in collaboration with the Romanian Orthodox Church, decided that the Holy Fire would be distributed door-to-door on the night of the Resurrection of Christ, following a relevant agreement signed between the two parties, reports Orthodox Times.

“While following the rules of social distancing, the believers will be able to get close to their home so as to avoid mass gathering and groups of more than three people. Two or three people from one apartment building can, with the necessary precautionary measures, distribute the Holy Fire to all the occupants from the same apartment building,” said Interior Minister Marcela Vela. In areas that have been quarantined due to the coronavirus spread, the Holy Fire will be transported with the assistance of Interior Ministry staff.

“The movement of all the priests who distribute the Holy Fire from door to door to the faithful, as well as to the volunteers, is allowed on the night of the Resurrection of Jesus Christ. All of them will carry their ID cards, the necessary documents from their parish and will wear masks and protective gloves,” added Marcela Vela.

The Interior Minister added that “the Interior Ministry staff working on the night of the Resurrection will also distribute the Holy Fire to hospitals, social centers and quarantine centers.”