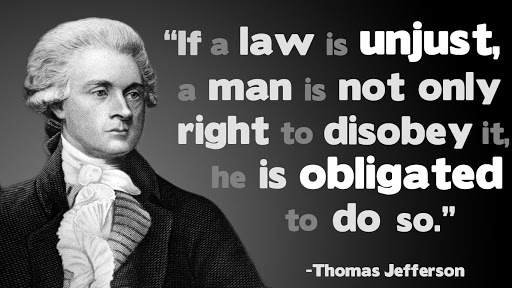 The purpose of this short comment is not to address a subject that goes back to Plato and Socrates and has been profusely debated through the centuries by philosophers and legal minds, the intellectual stature of whom this author admires.  But to make a few important points in the special circumstances we all live in.

When it comes to limiting (to the point of abolishing) basic freedoms, such as the freedom of religion, how can we accept that a law imposed by local or state authorities has absolute validity in front of our Constitution? Especially when this specific local law allows liquor stores and lotto outlets to remain open while it completely shuts down the freedom of practicing our religion.  When all kinds of “drive through” sales are allowed but “drive through” religious services are prohibited, then we are faced with an inequitable application of this law – and we have every right to protest it and demand an equitable restoration of our constitutional rights.

In addition, anyone who has spent time studying and practicing the Law can recognize that all laws have to be enforced with a degree of flexibility that will allow them not to become oppressive.  Laws are “absolute” by their nature, and in their absoluteness there is an inherent possibility of excessive “oppressiveness” in their enforcement.  Example: While the highway speed limit is set at 55 mph, it is extremely rare that the police will stop us unless we exceed 65 mph, at a minimum… Should I also note here that last year almost 39,000 people in the US died in car accidents? There is a tacit “consensus”, in the law community and in society at large, that in the enforcement of laws a certain flexibility is required.

In view of the above thoughts it was extremely discouraging that our Church decided to slavishly obey all the state and local directives about the “lockdown”.  Especially since the “Prince of Darkness”, Fr.Karloutsos, does not miss an opportunity to advertise his special ties to Gov. Cuomo… The GOA could have taken the initiative and unite with the Catholic Church and other churches and demand that the same rules that apply to liquor stores and lotto services apply to churches…  AB Elpidophoros could have taken the initiative on his own, and this could have been his “Martin Luther King moment”.  Unfortunately, he acts like a “fish out of the water”… In essence, he is a first year immigrant to New York, and, as if this was not enough of an obstacle, he chose to be encircled by a group of about ten also immigrants, “advisers” from Constantinople or Greece, who end up further limiting his touch to the wider American society… They all live together in the headquarters of 79th Street, which has now turned into a monastic enclave…

We could have achieved limited church services – a few people (40-50) per Church keeping the established “social distances” and determined by lottery or alternation during the several services of the Holy Week… We could have proposed and practiced other sensible measures regarding the distribution of the “Holy Light”…  But GOA chose to completely subject to the secular authorities and in the process they helped abolish – even temporarily – constitutionally protected “freedom of religion” rights.  These rights were very rarely suspended in many centuries of plagues and other catastrophes humanity was faced with.  Even worse, when they performed services “streamed online”, AB Elpidophoros and his assistants, appeared to keep very close together, not practicing the same “social distancing” rules everybody else is supposed to follow.

All crises are opportunities, as we all know.  Particularly for the Church of Christ, which has historically grown through responding to human tragedies, being next to the people and supporting them every step of the way.  This year’s lockdown practices regarding the Church were a complete and unmitigated disaster with wider implications, which I am sure we will have time to discuss. If one considers the incalculable financial and legal troubles GOA and the Church as a whole is in, there is no doubt that we are entering a time of existential crisis the magnitude of which was never seen before…

THE COMMENTS HAVE BEEN ACTIVATED – PLEASE BE BRIEF