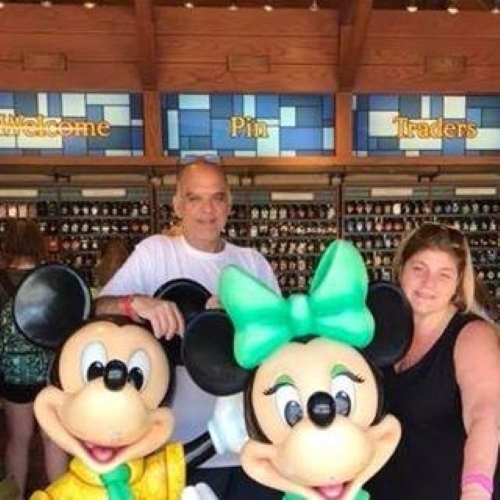 Photo: Gary Sideris and his wife, Betsy, Assistant Principal for the Elementary School

Introduction: For many years, and especially since the financial scandals that led to the bankruptcy of GOA were exposed, the main demand from the faithful was establishing rules of transparency and accountability at all levels.  The central obstacle to such a goal are the numerous cases of nepotism and the endless conflicts of interest everywhere. For example, we have exposed the ties of the former Education Director Mr. Efthymiopoulos to former AB Demetrios and his circle… We have also discussed nepotism as well as the numerous conflicts of interest involving Fr. Karloutsos and his immediate family… It’s an ubiquitous phenomenon, undermining the proper functioning of all institutions inside GOA and has resulted in the current complete paralysis and decadence…  Today we will analyze in depth its many aspects in St.Demetrios of Astoria, in a way that can be replicated and applied to other parishes and institutions of the Church.  We are hoping that faithful from other parishes will come to the front and expose similar violations in their midst… And we are also hoping that some will decide to involve the office of the Attorney General to investigate the most egregious cases… When the Archdiocese – which certainly has the power to intervene and take corrective action – does absolutely nothing to control the “Godfather” and his gang, then there is only one solution: to invite the authorities to do so…

The Case of St. Demetrios, Astoria

I have written many times about the various conflicts of interest in the Parish Council of the St. Demetrios Church of Astoria (the “Community”).  But when those with self-interest are protected by Nick Andriotis, principles like avoidance of the appearance of impropriety are ignored so that the Godfather and his minions can control a over $7 million (total for the community and the school) “enterprise” for their benefit.

The last few months the already existing conflicts of interest became even more pronounced, as Gary Sideris was elected President of the Parish Council of the Community.  While Mr. Sideris is not employed by the Community (he is an employee of the City of New York for several decades), his wife serves as Assistant Principal of the elementary school and his daughter is also employed at that same elementary school as a gym teacher.  Both family members work in the same organization headed by Mr. Sideris, whose position as President requires him to act in the best interests of the Community.  Most people who have both their spouse and child employed in an organization would avoid being a member of the Board of that organization, let alone be the chief executive officer.  Not Mr. Sideris – he ignored the conflict of interest and the appearance of impropriety, dismissed fellow Board members who questioned his nomination at the Parish election and grabbed the position to further his family’s financial interests over those of the Community.  Andriotis is more than content to have Mr. Sideris serve as President: he has bragged for years that Mr. Sideris uses his connections as a civil servant to run the St. Demetrios Festival and “cut corners” normally observed by persons employed in the private sector; and when other parish council members stepped up to operate the annual festival, Andriotis threatened that Mr. Sideris had the power to shut down the festival if Mr. Sideris was marginalized.  Is this behavior tolerable for a religious organization?

Did the Parish Council consult with an attorney on (i) whether it is ethical for Mr. Sideris to serve as President, (ii) the appearance of impropriety by having a family member of two employees of the Community serve as their superior, or (iii) conflicts of interest?  This is not a rhetorical question.  We know the ills of nepotism and the harm that nepotism does to an organization.  (Oftentimes, people without Department of Education licenses or certifications are hired in the name of nepotism, and given raises over more qualified teachers and administrators.  Perhaps one should look into the lack of licensure to be an Assistant Principal and examine whether their daughter is qualified to be a physical education teacher.  But I digress.)  If the Parish Council examined whether there was a conflict in interest, certainly it would have reached the conclusion that allowing a spouse and father of employees of a not-for-profit organization opens the door to a host of problems and complications that have the potential to damage the organization’s performance and sustainability.

What kinds of conflicts of interest are created with Mr. Sideris serving as President of the Community?  There are at least four general types of conflict of interest:

1.      Direct financial gain or benefit to the member. This is relatively obvious.  Mr. Sideris’s motivation and decision about salary increases to employees of the Community will have a direct financial benefit to Mr. Sideris, personally, when his spouse gets a raise and to his daughter.

2.      Indirect financial gain or benefit to the member. Which parent in their right mind will have the guts to complain to the Parish Council (or the School Board to which the President also typically serves) about the performance of Mr. Sideris’s wife or daughter?  Does anyone expect Mr. Sideris to reprimand or give constructive criticism of his wife or daughter?

3.      Nonfinancial gain or benefit to the member. In this situation, persons without proper Department of Education credentials would normally not be employed as administrators or teachers.  But because Mr. Sideris was a member of the Parish Council for over three decades, and currently serves as President of the Community, not having DOE credentials is ignored so that his wife and daughter have employment.  Who will perform evaluations on their performance?

4.      Conflict of loyalty. This type may be the most harmful and yet increasingly common type of conflict of interest which involves the situation in which a board member (Mr. Sideris) has obligations to other people (his family members) as well as to the organization. Mr. Sideris’s decisions (as a board member and President) could end up advantaging his family members over the Community.

At a time when parents are struggling to make ends meet while we are in mandatory quarantine due to the Coronavirus pandemic (rents are not being paid, parents are likely cash-strapped to pay the tuition, and parishioners are unable to attend Church and donate while social distancing), has Mr. Sideris looked at the interests of the Community to reduce salaries so that the School can meet its financial obligations?  Do we expect Mr. Sideris to reduce salaries like most corporations are doing?  Let’s not ask stupid questions.  He will not touch his wife’s six-figure salary nor his daughter’s salary because he is placing his family’s financial interests over those of the Community.  Mr. Sideris may elect to ignore his conflicts of interest, but the New York City Department of Investigation and Conflicts of Interest Board may not be so forgiving.

(Parenthesis: We are not suggesting here to cut everybody’s salary.  It is known that many teachers’ salaries are below acceptable “cost of living” levels.  But those who are enjoying six-figure salaries (and there are several, including some of the priests) should be offering some concessions to the Parish. All private and public organizations are cutting salaries at this difficult moment.  Why would St. Demetrios’ first move be to ask for a bank loan?  First you cut expenses and then, if necessary you look for financial help… Doesn’t Andriotis apply this principle at ALMA Realty?  I am sure he does – because if he didn’t ALMA would be bankrupt by now… Then why not apply it for the parish?  Let me not start imagining the possible answers, none of which is flattering for the Godfather…)

It is evident why Andriotis and his gang ignore the concept of conflict of interest. For over a decade, Andriotis “served” as School Board Chairman witnessing the School’s enrollment decline year after year.  The Andriotis gang was taking care of their own and placing their personal interests over the Community and School in order to torpedo the School to the ground, and then they would offer an easy solution:  to separate the one and only Greek American High School in the United States from the Church and to erase its Greek Orthodox identity in exchange for the great pay day Andriotis and his gang have been pining for years.

THE COMMENTS FUNCTION IS ACTIVATED – PLEASE BE BRIEF 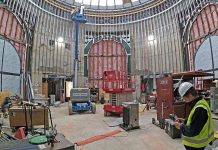 The Curse Of Saint Nicholas: All Actors Involved In Rebuilding Are Now Demolished… 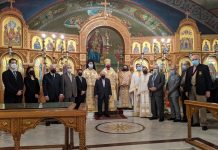