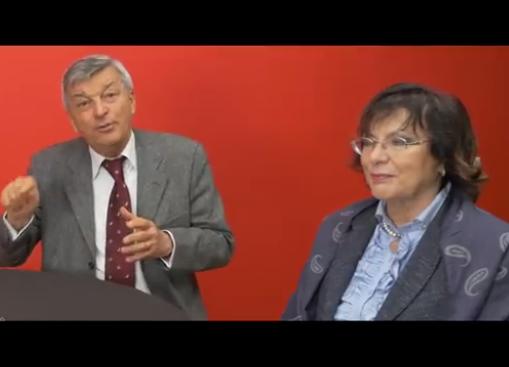 EDITOR’S NOTE (Nick Stamatakis)  In this important article below, it is clear that the establishment of the globalist international politics, medicine and pharmaceuticals had rushed (about two years ago!) to attack these two Italian doctors, Dr. Gatti and Dr. Montanari, who discovered nano-particles in vaccines causing serious diseases…  In a related very recent article (In Greek) it is explained that “Youtube” took down the video where Dr. Montanari explained that finding a vaccine for COVID-19 is a near impossible task, as the virus is mutating at a very fast speed.  Question: Is this the reason why Dr.Fauci is so certain that we will have a very bad second wave in the Fall? Why doesn’t he tell us the whole truth?  If this is the case, the “Lockdown” is very much meaningless from now on…  Measures should be taken to protect the vulnerable, while the economy will be fully functioning.  At the same time we should encourage all people to strengthen their immune systems by eating properly and by walking outside in the sun!!
Similar doubts about a possible vaccine for COVID-19 were recently expressed by Dr. John Ioannidis of Stanford University in an interview with Mr.Sahinis at radio 98.4, one of the most respected radio programs in Greece (please go to 32:30 of this video for the specific comments...)  In another interview of Mr. Sahinis at 98.4, Dr. Giorgos Romanos, using only scientific essays from the most respected journals such as “Science” and “Nature”, proves that COVID-19 was made in the Wuhan lab, just as it was recently announced by Secretary of State Mike Pompeo, who referred to “enormous evidence”…  The pieces of the puzzle have started to fall into place…
SOURCE: AUSTRALIAN NATIONAL REVIEW
By Pam Brown
Police raided the laboratory of Dr. Gatti and Dr. Montanari (pictured), a married couple who are devoted to studying diseases, including cancer, heart disease and neurological problems, caused by nano-particles that arise from processes that involve high temperature such as manufacturing, waste incineration and car exhaust. Most nano-particles are expelled by the body when inhaled and consumed, but when injected by way of a vaccine, they are able to stay in the body and cause disease. The couple performed a study and found nano-particles polluted all of the 44 vaccines that they tested.

In the 90’s, Dr. Antonietta Gatti discovered the relationship between micro- and nano-particles as well as a great number of pathologies: cardiovascular diseases, many forms of cancer, multiple neurological diseases, and autoimmune diseases. She’s taken part in many international research projects, including the pathologies induced by depleted uranium, waste incineration, food polluted with inorganic particles, and more.

Currently, she is the coordinator of the Italian Institute of Technology’s Project of Nanoecotoxicology, called INESE.

She is also a selected expert of the FAO/WHO for the safety in nanotechnological food, a Member of the NANOTOX Cluster of the European Commission, the author of a book titled “Nanopathology: the health impact of nanoparticles,” she’s on the Editorial Board of Journal of Biomaterials Applications and is a member of the CPCM of the Italian Ministry of Defense.

Furthermore, she and her husband Dr. Stefano Montanari founded a laboratory called Nano-diagnostics for the evaluation of the pathological tissues of patients. It’s presently at the University of Modena and Reggio Emilia, Italy.

Recently, the Italian police raided their home, the police took all digital assets that were owned by the the two nanopathologists, including laptops, computers, and flash-drives – basically years of work and research.

James Grundvig via the World Mercury Project describes what happened quite well:

“Because Gatti and Montanari had taken their research of nanodust and nanoparticles, from in-vivo (performed in a living organism) and in-vitro (performed in a test tube) to what unseen contamination might reside in vaccines in 2016, they came under the microscope of the United States, European, and Italian authorities. They had touched the third rail of medicine. They had crossed the no-go zone with the purported crime being scientific research and discovery. By finding nano-contamination in random vaccines, Gatti and Montanari revealed, for the first time, what no one knew: Vaccines had more than aluminum salts adjuvants, Polysorbate-80, and other inorganic chemicals in them: they also harbored stainless steel, tungsten, copper, and other metals and rare elements that don’t belong in shots given to fetuses, pregnant women, newborns, babies and toddlers developing their lungs, immune and nervous systems.”

The scientists published their work in January of 2017, titled New Quality‐Control Investigations on Vaccines: Micro‐ and Nanocontamination. If science wasn’t plagued by corruption, an investigation should have started, healthcare agencies would have become involved and vaccine safety policies would have come under intense scrutiny, but that never happened.

Below is a recent interview with the two, done by Surêté Vaccins; the quick description of the video reads:

“Two italian researchers have found nanoparticles are polluting almost all vaccines. The small size of these particles allows them to enter our cells and have a permanent inflammatory effect. Mrs Gatti was about to testify in a parliament enquiry on vaccine damages of Italian military courses but both researchers have been raided by police and all their material has been taken away.”

Nano particles are very small bits of matter, and they can enter into the human body, as the pair of scientist discovered in the 90’s. This is why we have so much published research linking various chemical products, like cleaning agents, to the destruction of human health. These nano particles are produced by waste incinerators, car traffic, and many other different ways. Because they float in the air, we can inhale them, which means they enter our lungs and then enter into the blood within minutes. This leads to a number of problems. These particles are carried by the blood to every area of the body, as they explain in the video below. When they enter into the tissues, the body cannot get rid of them, and so those particles stay there forever and are the cause of various diseases we see today.

They explain how they’ve been analyzing and studying vaccines for the past 15 years.

They go on to explain, with regards to their most recent vaccine study linked above,

“After a while, an Italian University sent us a student for her thesis, and we analyzed 19 different vaccines with her, finding all of them polluted by micro and nano particles. Then we went on analyzing them and now we analyzed about 30 vaccines with many samples of each vaccine, and, we discovered that they were all polluted…”

When all said and done, they analyzed 44 different vaccines. All of them contained these harmful particles, which are foreign bodies entering into the body. Whenever this happens, the body has a reaction, and it’s not good.

“Those foreign bodies, those particles, are like a bullet. If I shoot somebody, and that bullet makes a hole in the heart, it’s not very important if the bullet was made of stainless steel, of titanium, of iron whatever, what’s important is that that they punched a whole in the heart.”

In it, they talk a little bit about the study and what’s currently going on.