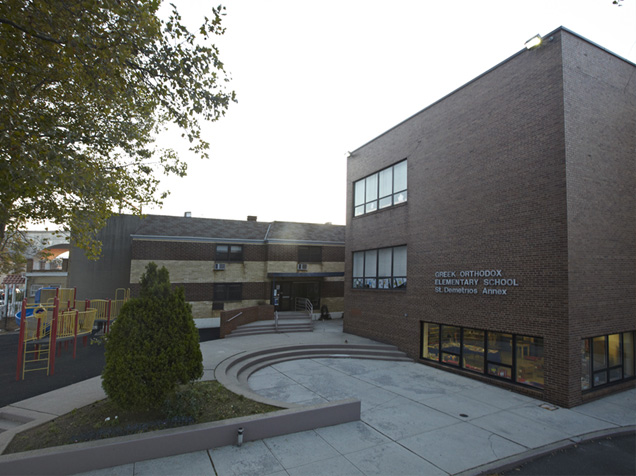 It is during times of crises that a good leadership proves itself – and I need only mention the example of former Mayor of NYC Rudy Giuliani, who during the terrorist attack of September 11, 2001, was recognized both for having the City well prepared and for acting as a true leader during and after the emergency… In big institutions and small, it is a crisis that brings out the best and the worst of a leadership. The current pandemic has exposed how ill-prepared the leadership of the St.Demetrios School of Astoria has been and how paralyzed they proved in handling the crisis.  The school administration was based on nepotism and was certain to fail…

The School has been closed since the middle of March 2020, as directed by NYC Department of Education. Unlike other public or parochial schools, where instruction after an initial adjustment continued unhindered, many parents of the School have listed their complaints school-wide K-12, that;

The School and its teachers were not technologically equipped to begin with.   The former principal, Mr. Koularmanis, left behind a school that has been archaic with technology. A brand new computer lab with new iMacs does not make the School technologically advanced without the proper organization, as the computers need humans to operate.  All of the teachers should be “Google educator certified” and have knowledge of certain online tools. Parents are commenting that had the School trained their teachers, this would have made this remote learning transition much smoother.

Parents are trying their best to help their children but they are not “educators” and feel the School administration has let them down.  Some of the teachers are just giving assignments with little or no guidance. Parents feel that they have become the “teacher” and are giving instruction to their children versus assisting them. Naturally they are complaining that if their children are to be home schooled, why pay the tuition? Students cannot teach themselves and nor should they.  In the end parents are concerned their children will fall behind and will not be academically ready for the 2020/2021 school year.  Also, the School failed to realize that most of these parents are currently working remotely and cannot juggle teaching with their day job.

Yet the School is asking for tuition when the students are not getting any value.  Leadership at the School truly dropped the ball.  Did the School offer their teachers any guidance and assistance (mostly from the computer teachers) so that they have the tools to provide remote learning?  Has the School provided instruction comparable to the level that neighboring Greek Orthodox Schools are providing in remote learning, or better yet, collaborate with them to achieving good practices for its students?  The Greeks say that “the fish stinks from the head.”  By failing to have educators at the School Board, we are witnessing how novices are not prepared to handle the job.

As we have explained, incompetent leadership started the long-time involvement of Nick Andriotis in school affairs and esp. when he “served” as School Board Chairman for over a decade.   Together with Mr.Koularmanis (the former principal), they “managed”  to reduce a school with enrollment of over 1,400 students to the current level of  barely over 485.  It is no secret that Nick Andriotis has no background in education (in fact, he is minimally educated himself).  When he saw the writing on the wall (i.e. that the Community wanted him removed because he was ill-equipped to run the School), he offered the “solution” to have his relative and employee at Alma Realty, Fotis Papamichael, become the School Board Chairman.  Like his predecessor, Mr. Papamichael is not an educator (he is an engineer).  So where does this leave the School?  Its School Board Chairman has no credentials in education, yet, because he is the puppet of Andriotis, the Andriotis gang looks the other way since they still have a control over the School.

But what is the rationale behind the 10% tuition reduction for two months? Does it correspond to the almost complete absence of instruction?  And how has Mr. Papamichael suggested crediting those parents who pre-paid the tuition at the beginning of the year?  If Mr. Papamichael had called a School board meeting all these issued would be solved in a much better way.  Instead, he took the road of his dictatorial boss, the “Little Napoleon” Andriotis, and  started making arbitrary decisions on a whim…

While the School is closed, how has the School treated some of the employees who are likely sitting at home not offering any services?  We have received complaints about several employees whose high salaries need to be eliminated in order to bring the School into financial stability and those savings can be used to offer services for the School’s teachers and students:

Dean of the School – Peter Stasinos, is the Dean (and cousin of Koularmanis) and although he has no background in education -receives a handsome salary ($65k) with full medical insurance (a rarity in the School while all other teachers have to pay for their family health insurance).  Since there are no students in the building because of social distancing, why is the Dean still being paid his salary?  What students is he disciplining while they are supposed to be receiving virtual instruction at home?  Why hasn’t the Dean been furloughed like all other companies are doing during the pandemic?

Admissions Director – the School’s Admissions Director, Loriann Vergos, is a close friend of Koularmanis, and also receives one of the highest salaries of the School.  She has spent over $80k in creating a website, brochures, and advertising/marketing materials, yet her efforts yielded a net 3 students enrolling into the School. We have received numerous complaints from parents who tried dozens of times (before the pandemic) to reach Ms. Vergos via telephone or personal visits, but she was always unavailable.  In the rare occasion that parents were able to reach the Admission Director, the parents were referred to the tuition payment program (TADS) to address parent inquiries, and, invariably, TADS told the parents to refer their questions back to Ms. Vergos because the issues about payments were under Ms. Vergos’s control.  How does the School justify spending over $80k in marketing costs and $65k in the Ms. Vergos’s salary in order to get a net 3 students to enroll ($20k) and to have an employee who is habitually unavailable to address parent inquiries? If she was not available before the pandemic, you know for sure she is “unavailable” now.  Why should the principal’s office have to answer for Ms. Vergos’s reluctance to address parents?  Isn’t responding to parents’ questions about tuition payments part of her job duties?  Spending $145k a year to make $20k makes no business sense.  The parents of the School deserve better than this.

Middle School Coordinator – another example of Koularmanis’s nepotism is his installation of Miss Alexandra Tsongas as Middle School Coordinator at $65k per year.  Why appoint a middle school coordinator when, for years, the middle school and high school were operated very well by Ms. Helen Karagiorgos (who is the current interim high school principal).  Ms. Karagiorgos served with distinction both divisions of the School and dutifully responded to parents in a courteous manner and was (and continues to be) devoted to her staff.  To the contrary, parents have reported to us that Miss Tsongas avoids addressing parent complaints and has a penchant for walking out on meetings when criticized; in the rare occasion that she has to address parent complaints, she becomes confrontational and unworkable.  The School had it right for years with Ms. Karagiorgos operating both the middle school and high school under one salary.  The School should not be overburdened with another hefty salary ($65k) when enrollment is declining.  What business sense does it make to overburden the School with another salary when Ms. Karagiorgos runs the School seamlessly.

At what cost will the School continue with nepotism?  Is it worth paying the above employees $195,000 per year (plus the costs for insurance, etc.) to support Koularmanis’s cronies?  Teachers are not given the tools to instruct.  Students are not keeping up with their peers.  How rational is it to have a School Board comprised mostly of Andriotis’s “yes people” who lack any formal education and, much worse, are not educators?  The cycle of nepotism that has plagued the School for years needs to end if the School has any chance to survive. And it is not only about the monetary damage… If you have three unqualified and possibly unnecessary people in central roles, then the whole structure of the school is thrown off-balance and it is not operating properly…

And how has Archimandrite (Προϊστάμενος), Fr. Nektarios, acted in response to the pandemic?  Are the priests continuing to give religious instruction to the students?  Sadly, the priests have not taught a single lesson since the School’s closure during the pandemic.  If the priests have reduced duties because church services are vastly reduced due to social distancing, shouldn’t the priests have some time to devote to religious instruction to the School’s Greek-Orthodox students via remote learning?  Maybe upload a video on YouTube to explain the significance of Pascha?  It is known that the School pays for a substantial portion of the salary for one of the 4 priests of the Community.  Why is the School paying a priest’s salary?  Are parents supposed to accept that the School can pay for a priest’s salary, but the teachers (who have the privilege to educate our future members of the omogeniea) are paid a few “pennies” above the poverty level?  And if the priests are too busy to instruct the youngsters of the School during a time when they may feel alone and abandoned by God, what on earth are the priests doing?

No one knows …. but one thing is for certain: they are receiving their salaries.  Shouldn’t the priests of the Community be teaching us all the lessons of sacrifice at a time of economic uneasiness?  The sacrifice of a reduced or deferred salary so that the School and Community can get some relief from the economic toll of the pandemic.  Instead, the priests are teaching us that their love for money trumps spreading the word of God.  A common theme with our Archdiocese.

The keys to saving the School are at the leadership’s fingertips.  For the sake of nepotism, the School is paying over $195,000 per year to employ persons whose absence would not be missed.  There should be no reason the School should pay any priest’s salary.  The children enrolled at the School deserve better.  A better School Board Chairman – one who has experience in classroom instruction not simply a puppet of Andriotis.  Employing school staff with credentials (proper licensure) rather than friends and family of Koularmanis.  And keep Church payroll off of the School’s budget so that the students’ tuition goes to their education and future (not to employing 4 priests for 2 churches).

THE COMMENTS FUNCTION HAS BEEN ACTIVATED – PLEASE BE BRIEF 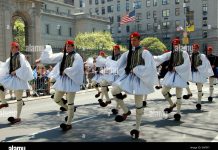 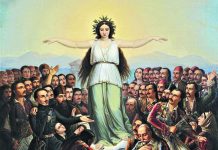 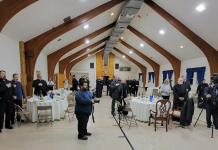