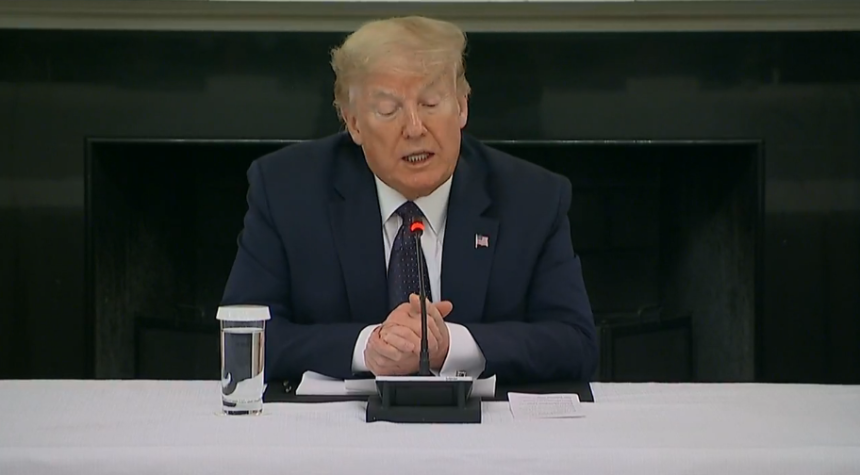 In a new bold move President Trump took the initiative today to announce that he is taking one pill a day of hydroxychloroquine for the past two weeks.  He underlined that he is not diagnosed with COVID-19 and he added that he is doing it for prevention purposes, as many other doctors and nurses have done. He made sure to explain that he is following his doctor’s advice and he also added that he taking the drug in a combination with Z-pack (azythromycin) and zinc.

This last note, the existence of zinc in his treatment, may be the key to understanding the unexpected announcement.  Please note that the National Institutes of Health announced last Thursday that they will start a clinical trial of hydroxychloroquine.  A careful reading of this announcement leaves us with the impression that zinc is not part of the clinical trial.  Why is it left out?

Zinc is a mineral that our body does not produce and adding it increases the immune system function, among other effects.  Why is zinc so important?  Here is the reason: Front line doctors in NYC and elsewhere offer this formula for treating COVID-19: Hydroxychloroquine punches the hole in the cell to allow the zinc in to kill the virus and the Z-pack prevents other infection. Zinc plays a key role. It doesn’t work for everybody but it seems to work in a large portion of cases. It’s a 6-day regimen, so the short length would seem to reduce any of the so-called minimal heart risks that were used to scare people away.

But if the clinical study by NIH leaves out zinc then it clearly shows that this study also is designed to fail.  A previous study had shown high death rates among veterans, but it was clearly designed to apply the medicine in the advanced stages of COVID-19.  On the opposite, all studies about the drug, including the most inclusive one by the famous French doctor Didier Raoult, had shown beyond any doubt that the drug combination works well in early stages – and possibly as a prevention!  Some other sources refer to studies from China showing no positive results for hydroxychloroquine.  Why would any American institution trust anything coming out of China related to COVID-19 is beyond my understanding…

Today’s sudden announcement by president Trump maybe yet one more episode in the raging war the “deep-staters” are waging against this president and everything that he represents. If anything has become clear during this pandemic is that the medical bureaucracy of this country is completely corrupted by interests, not the least of which is “Big Pharma” and Bill Gates. Big Pharmaceutical companies have no interest to prove that a 15-cent pill has serious effects in treating COVID-19.  Instead, they are promoting drugs like remdesivir costing hundreds of dollars per prescription… And Bill Gates has every interest to see that there is no medicine for COVID-19 as he has his own big plans to inject the whole humanity with his vaccine.

Humanity has a long history of dealing with pandemics and still today there are many viruses against which there is no vaccine.  There are viruses affecting 20% of the global population, yet there is no vaccine for them… But there are good antibiotics for all viruses, excellent drugs that treat the symptoms of the infection and allow life to go on normally...  Why then, should we prioritize the vaccine? Especially when we know that we may be dealing with at least three other possibilities: 1) The virus may go away, it may disappear as it has happened in the past with similar viruses.  2) The virus may mutate and keep mutating every season, as it happens with the flu virus, in which case we should have a new vaccine or vaccines every year and possibly for every continent.  3) The vaccine may be effective for only a part of the population.  For example, the flu vaccine is effective for only 60% of the people who take it.

Finally, I have to be cynical about the medical bureaucracy of this country: They are the first to blame for leaving this country unprepared to deal with the pandemic.  We have already established that their failed tests delayed the response to COVID-19 by about 18 days!!  Some reports also suggest that these tests not only were flawed but were transmitting the virus!! So it is not far-fetched to think that they are setting the hydroxy trial up for failure. And we have to be suspicious of how their results will be reported.

They would try anything to make Trump and his administration look bad, including your life. They cannot allow him a single win, even a partial one, regarding hydroxychloroquine. These are sick people and we have to suspect that anti-trump actors are within this bureaucracy… Meanwhile, anecdotal evidence keeps coming in from around the country, supporting hydroxychloroquine.
But if Al Sharpton, Kim Kardashian, and Ellen DeGeneres had said “let’s try it”, every citizen would have had a family pack at the door in a week with no questions asked, with the media screaming that Trump was engaged in “genocide” by denying this treatment.
At the same time Trump’s announcement shows the American people that they have to trust common sense: when a drug is in use for 70 years with well-known side effects, then they should consult with their doctors and make a sensible decision. But in the news tonight and tomorrow you will not hear that the President asked the advice of a doctor and followed a specific regimen.  You will only hear the insults… .
May 18, 2020, n.stamatakis@aol.com   www.helleniscope.com