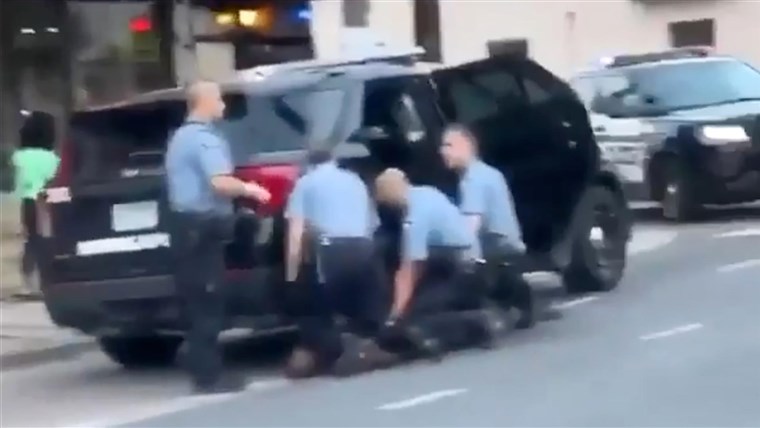 After decades of unprecedented access to higher education through “affirmative action”, after at least 30 years of successful charter schools and after two terms of the first black president, Obama, who can sincerely claim that the state of racial equality in this country is worse than ever?  Only those who ignore that federal policies by the Trump administration for prison reform, “opportunity zones” etc. had as a result a 400% increase in black business ownership in just one year (2018)!! All these events led to a huge change of party affiliation in the black community – away from the chains of the Democrats!!

I do not think there is any American who is not disgusted by George Floyd’s murder by police in Minneapolis  – nobody who thinks that this crime was justified in any way…  But a week after the event, which could otherwise lead to constructive dialogue and changes on institutionalized racism, the essence of its meaning was very conveniently lost in politics.  It was usurped by the usual culprits, the peddlers of hatred, Al Sharpton and “reverend” Jackson, and Antifa, the pawns of the hidden leadership of the “losing party”, the same “party”, with tentacles both in the Left and in the Right, which tried everything to overthrow a democratically elected president – but failed.

To start I should remind this audience that there is another side of racism and it has to do with the racism practiced within the black community: By teaching “how to be black” and “how to associate only with black people”, even where there is no obstacle to integration, the “culture of ghetto and marginalization” (perpetuated by some black leaders for their own personal benefit in the same way other ethnic groups – including ours – perpetuate a “ghetto” mentality) does more damage to racial relations than any white supremacist ideology would ever be able to. (Those more interested for an in-depth analysis of this subject please read Chris Bodenner’s excellent piece here).

And now that we have both sides of the same coin in mind let’s just examine the real state of racial relationships in America today.  The way you objectively judge the state of racial relationships in a free economy like ours is by examining “access to opportunity” –  and not by settling on “perceptions” of racism.  If we settle on perceptions of racism we will be certainly lost as every race group harbors racist feelings against others: Historically we have racism even in Africa, of all places, against other black groups or against other ethnic groups – even in situations where the “racist” Blacks were dominant!!

So what is the status of “access to opportunity” in today’s America? I would say it is better than any other time in history by anyone’s standards – especially after we elected and re-elected our first Black President! But if anyone wanted to have an even more objective view of RECENT progress on increased “access to opportunity” here are some astonishing facts that make the tenure of the current president very special: 1) In just one year, 2018, African American business ownership was up by 400%, according to a widely quoted survey.  Does this have to do with easier access to SBA loans, lower taxation, red-tape reduction and other actions by the Federal Government? You can bet it has… And the most amazing fact is that the majority of these businesses are owned by African American women! 2) Nowhere is the successful intervention of the federal government more evident than in the creation of opportunity zones in inner city areas, plagued by chronic unemployment and other social ills… Just two weeks ago, the “father” of this wonderful idea, HUD secretary Ben Carson, made a presentation of real successful results!!  3) But the crown jewel of the Trump administration’s actions against institutionalized racism was the announcement last year of the release of 3,100 prisoners, most of them African Americans, in an effort to reform the criminal justice system, which had unnecessarily put to jail hundreds of thousands of Black Americans and it was rightly described as the new form of slavery! These newer trends have followed decades of African American demands for more charter schools, demands that go against the establishment of the Democrat Party and the teacher’s unions who control it. And they come after decades of “affirmative action” policies which have given the minorities unprecedented access to higher education – even at the expense of such deeply-rooted American principles as “meritocracy”.

Why those who pretend to support the interests of the black community in America do not really push for more charter schools? To take the argument one step further, why the American Left sat at the sidelines when the Trump administration took real measures of reform?  And why wasn’t the Obama administration the one to initiate such reforms?

The short answer to this question has to do with their flawed ideology. An ideology which does not promote freedom but instead peddles dependence of the individual to the government.  For them, handing out “government assistance” checks, food stamps and even “free” cell phones is  a sure method to create a mass of people who are not in charge of their own future but have to beg their political “patrons” – and therefore they need to vote for them… It is the same reason why the thoroughly corrupt and un-american democrat leadership wants to give “free” money – and even voting rights – to undocumented immigrants… And they would probably want to keep them “undocumented” – in a slavery status – forever.  Because the moment some of them are legalized they buy a house and start a business and, guess what, they realize that their “patrons” in the government take half of their hard-earned money in taxes… At this moment they instantaneously become fierce conservatives…

It is the same phenomenon that is being observed among the blacks, the newly “entrepreneurial” blacks… Who are changing their political affiliation faster than anyone could ever imagine!  Who says this? None other than the leftist “Guardian“….

P.S.  When I hear that European so-called “leaders” are “disgusted” by american institutionalized racism I cannot hold my laughter – and anger… Especially when the comments come from the Germans who even today refuse to pay reparations for the crimes against humanity they have committed in Greece during WWII and they keep treating Southern Europeans as their slaves…