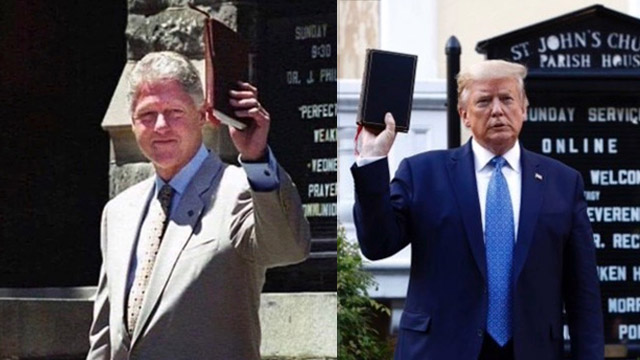 EDITOR’S NOTE: (Nick Stamatakis) As you can see in the photo above, both Clinton and Trump used the same Bible IN THE SAME CHURCH, St.Johns Episcopal, close to the White House (credit for the photo: Rushlimbaugh.com).  Bill Clinton visited the Church after the “blue dress episode” had become public and after repenting and confessing to the biggest hypocrite of all time, the “reverend” Jackson… The corrupt media witnessed his “repentance”, took the “photos” and said not one word about the hypocrisy. Instead, they wrote that Bill Clinton “went closer to God”… But when President Trump visited the church they used any lies they had in store: “He has not even read the bible…” – yes the leftists/atheists in the media accused Trump of not having read the Bible…  Then they said that “he used the military” to clear his way… (It was the Park Police…)…  When will the double standards and the hypocrisy stop?  They will stop when the leftists and atheists are defeated with the widest possible margin in November…

The media are lying to you about everything – including the overwhelming majority of the Greek-American media… This website will point out hypocrisy and lies in any way we can.

Below you can read one of the best analyses on the subject by John Daniel Davidson published in the Federalist.

The media lied about the Russia collusion hoax, about the Mueller probe, about impeachment, about the coronavirus—and now they’re lying about the riots.

It seems no great event or upheaval in our national life can pass now without the media lying to our faces about it.

In recent days we’ve heard a steady drumbeat of lies, distortions, and disingenuousness from the mainstream media about almost every aspect of the unrest now gripping American cities. The deceit is almost too pervasive and amorphous to describe, but I’m going to try anyway.

Over the weekend we were told, for example, that the looting and violence was being instigated not by left-wing anarchists and antifa groups but by the media’s favorite villains: white supremacists. CNN, whose Atlanta offices were vandalized Friday, went on and on—without a shred of evidence to back it up—about how white supremacists might be infiltrating the protests and stirring up trouble. The New York Times, in a report that even quoted a senior police official in New York City saying outside anarchist groups were coordinating mayhem before the protests began, nevertheless veered into a long aside about how far-right “accelerationists” were hoping the unrest would bring about a long-sought second civil war.

By Monday, no one was talking about the white supremacist agitators anymore. The media had moved on to better, more plausible lies.

Here’s Matthew Yglesias of Vox, disingenuously comparing the rioters and looters to pro-democracy protesters in Hong Kong. His snarky tweet is meant to suggest Arkansas Sen. Tom Cotton is a hypocrite for supporting the Hong Kong protesters but calling for the restoration of order at home.

No one should have to point out to Yglesias—or anyone else with a large media platform—that the looters of Minneapolis and the rioters in Philadelphia have nothing in common with the people fighting against an actual communist dictatorship in Hong Kong. Yet here we are.

This kind of disconnect—what can only be described, at best, as a willful misunderstanding of reality—has been disturbingly commonplace among media pundits and reporters since all this began.

Here’s NBC News’s Carl Quintanilla doing the same thing, comparing Trump’s positive comments about the peaceful protests of draconian coronavirus lockdown orders in Michigan on May 1 to his comments on Monday to state governors that they need to make arrests and restore order.

TO CONTINUE PLEASE FOLLOW THE LINK TO THE FEDERALIST