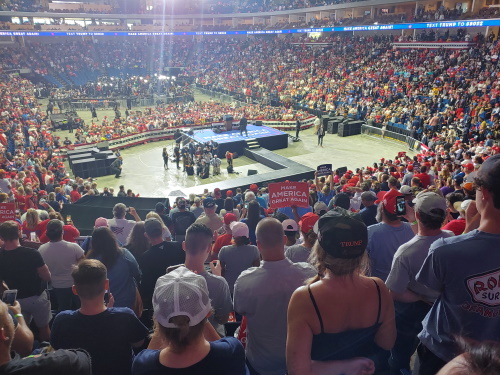 Does this Arena Look “Mostly Empty” to You?

Well, it would if you weren’t there and accepted the assessment of Chris Wallace (who also wasn’t there) and other legacy media types. (Or it would if you believed that mourners for George Floyd were “mostly peaceful” for that matter.)

So here’s the backstory.

The Bank of Oklahoma Center (BOK) seats 19,200 people. FOX news and other outlets say that it was half-empty. As you can see from this picture which I took (because I was there), you can clearly see that it is a lie.

Every section of the arena except for the top-tier (“nosebleed”) section was completely full. The top-tier was about 1/8th full at the most by my estimation. That means that according to my best guess, that there were a little over 10,000 people in attendance. In other words, a typical pre-COVID Trump rally.

Still don’t believe me? Then consult the stats put out by the BOK center, which said that by 7:00 o’clock, they had logged 12,000 people going through the turn-styles. For a hugely expensive venue like the BOK, the people that run it have to have audience size down to a science in order to promote it to other concerts and events. The City Fathers are also keenly interested in how well the BOK does because the downtown business district relies on it for restaurant and hotel sales. They also have to justify to the many skeptical taxpayers what a good investment it was to build in the first place.

This can’t be stressed enough: venues like the BOK are always on the lookout for more concerts. That’s how they stay in business. That means that they can’t fudge on the numbers –at all. Otherwise the really big-ticket events will take a pass and go to Oklahoma City, Dallas or Kansas City instead. And the City Fathers who lobbied hard for the BOK will look chumps.

So yeah, I’d rather believe my own eyes and the BOK numbers rather than what I hear on the legacy media.

So why didn’t a million people show up? Several reasons:

1. Staggering numbers. I dithered for several hours on whether to go as I had no expectation of getting in. I never received electronic confirmation in the form of tickets (as I did in 2016 when I attended the Trump rally at the Mabee Center.) As it was, the weather was brutally hot (82 degrees with 51% humidity) and everybody had to wait in line for several hours. As for myself, I had to park my car in my old neighborhood, which necessitated a 3/4 mile walk each way. Luckily, once I got there there were vendors there giving out free bottled water. Smart move.

2. Trolls. Many of the tickets that people signed up for were from trolls who were encouraged by Tik-Tok, a Communist Chinese social media site. (Well played I must say.) I myself clicked on three different times for tickets because I wanted to make sure that I could get a couple. I’m sure that there were thousands of other Trumpkins who did the same thing.

3. Fear. Many of us felt that thousands of these tickets were being bought by outside agitators and so chose not to attend. Things were tense on both sides. I had heard that pro-Trump motorcycle gangs were going to be there to “provide protection” for us. Truth be told, there was a fracas on the other side of the arena right before I got there but it was handled with dispatch. Here’s the point: Trump supporters and Republicans in general are a law-abiding lot and would rather not get embroiled in street-fights. (Now of course, there is the added fear that if you’re white and even if you engage in self-defense, it’s you who’s going to get prosecuted.)

4. COVID. This goes without saying; many still have a fear of the “pandemic”. I was told by my step-mother that I shouldn’t go but that if I did, I should avoid coming by to visit for 14 days. (My dad has Parkinson’s and I like to pop my head it every now and then to see how he’s doing. I had to think long and hard about that.) Anyway, everybody had to have their temperature taken as they were standing in line. I actually saw a few people get turned away because of this.