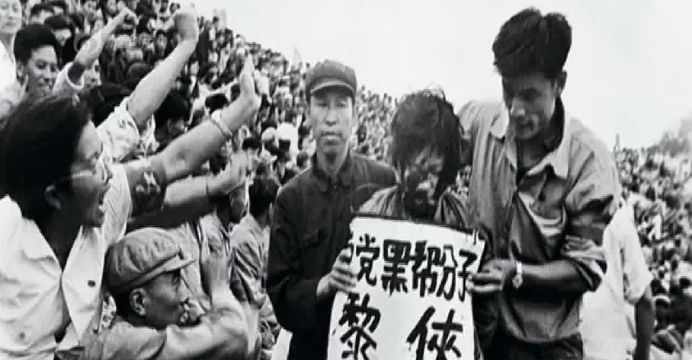 I’ll get right to it:

What we are seeing presently is nothing less than Maoism, specifically the tumult, chaos, anarchy and terror that Chairman Mao presided over during the Cultural Revolution, minus (so far) the wanton destruction of millions of innocent lives.

I won’t get into the details except to say that this was a period in modern Chinese history in which everything –and everyone–was up for grabs. History, genealogy, culture, even people were not safe from the madness of the masses. Students turned on teachers, who were then forced to wear dunce caps and admit that they were “capitalist running dogs”. Children turned on parents, neighbors ratted out neighbors. This is how pervasive the madness was.

Think of it as a massive “prisoner’s dilemma”. You don’t know what the rules are mainly because there are no rules (except you can’t touch Mao [Obama] and his circle but even that’s no guarantee). You –as a mere peon–only know that you’ve done nothing wrong but that fact alone won’t insulate you if somebody decides to throw you under the bus. In Red China “under the bus” could have been prison, a reeducation center or even death.

What to do in such a chaotic situation? Simple: be the first out of the box with an accusation against Person X and hope that this will immunize you from prosecution down the road from Person Y. Under such a regime, due process is a not even a legal fiction; it is a dead letter.

Now compare that with America today. People are groveling before Antifa and BLM protesters. Some are actually kneeling; others are washing the feet of BLM “mourners”. This is nothing less than blasphemy, pure and simple. It’s got absolutely nothing to do with “white privilege”. That’s just the excuse du jour that these miscreants are using to justify their criminality.

And this is where it gets really interesting: the major corporations are going along with this because they have zero intention of improving the lives of black citizens. It is merely an inoculus to prevent anybody from accusing them of doing nothing. See? It’s not that they’re “doing nothing”, they’re “doing something” if by “something” you mean holding sensitivity training seminars for their employees where the employees admit their racism and shelling out the big bucks to the BLMers. As for ordinary black folks? Nada. In the meantime, ka-ching!

And it fools all the SJWs and BLM shakedown artists out there that said corporations are sufficiently “woke”. It’s no different than when Hugh Hefner went from being the publisher of a sexist magazine which made its money from peddling female pulchritude to being a “feminist”. He didn’t change his brand, he merely fooled the SJWs of his day into thinking that he was on their side so he could continue along his merry way objectifying women. Brilliant if you ask me. And yes, many young men back in the day increased the notches on their belt by going along, pretending to be feminists. (Or so I am told.)

Unfortunately, this clever scheme has expanded to our governing classes. Recently, a Senate committee voted to rename two military bases because they bear the names of Confederate generals. David Petraeus even went so far as to call Robert E Lee a “traitor”. A far better general than he, named Eisenhower, set the likes of him straight decades ago as to this calumny.

But this is where it gets interesting. It’s not just Confederate statues which are being beheaded and torn down, it’s all statues and monuments. Outside the Indian Embassy in Washington, the statue of Mohandas K Gandhi has been vandalized. In London, England, the statue of Abraham Lincoln has been desecrated. In Boston, the monument dedicated to the 54th Colored Regiment (which was memorialized in the movie Glory) has been vandalized. In London itself, a government-schooled woman was asked what she felt about the Churchill statue she was defacing. Her reply? “I don’t know anything about him.”

This is what I mean by an American cultural revolution. And like the Chinese one, it won’t look pretty in retrospect once we get on the other side of this. As in China, there will be a lot of recriminations among many, mostly on the other side. Some will regret their actions when the mob comes for them, as it did for Robespierre and Danton during the first Reign of Terror. Others will have their consciences pricked and feel genuinely sorry.

Why? Because this is madness, pure and simple.

Now, even a person’s mode of dress during a private outing is enough to get him defenestrated. In the picture below, you will see Mike Gundy, the head coach of the Oklahoma State University Cowboys, wearing a tee shirt that says “OAN”: And what exactly is “OAN”? Who the hell cares? Why should it matter what a man wears on a fishing trip? As far as I’m concerned, it makes no difference if he wore this tee shirt or a mesh shirt and fishnet stockings. (I guess a man is allowed to wear fishnet stockings during a gay pride parade.)

Unfortunately for Gundy, however, one of his star players, Chuba Hubbard, lost it. You see, OAN is a 24/7 cable news network, one that President Trump likes to watch every now and then. So Mr Howard, a 6’0″ 201 running back for OSU, clutched his pearls and passed out on the fainting couch in the parlor. I suppose someone had to grab the smelling salts to revive the poor dear.

There is an Achilles Heel to all this. And we in America are suffering because of this Achilles Heel –the fantasy that all men are “equal”, that there is no hierarchy. It would be apropos at this time to quote Alexis de Tocqueville:

“When inequality is the common law of a society, the strongest inequalities do not strike the eye; when everything is nearly on a level, the least of them wound it. That is why the desire for equality always becomes more insatiable as equality is greater.”

This, too, will be the poison pill (if you will) of this present madness. Because what we are witnessing is not the equalization of the various peoples of the United States but the creation of a new, fantastic, and unsustainable hierarchy. We are witnessing nothing less than the birth of a new caste system, a resegregation if you will. Even odious “liberals” like Bill Maher are sensing this.

Consider: white actors are being prohibited from voicing black and other non-white characters in cartoons. Cartoons. And the great blackface scandals are ensnaring dozens of liberal actors and actresses. Take a gander at this:

In this milieu, I doubt that a movie like Tootsie or Some Like it Hot can be made. Mel Brooks has even said that not only could Blazing Saddles not be made today, but it can’t even be watched. This is “progress”?

This a type of puritanism (perhaps our nation’s greatest defect) that is beyond obnoxious; it is wicked. One that is in fact, not only unsustainable, but one that is unenforceable. Do we really want to go down this route? Then black entertainers like Beyonce Knowles should stop straightening her hair and dying it blonde. Seriously. After all, isn’t this a type of cultural appropriation?

Let us go further: when black entertainers don non-native hairstyles, are they not implicitly buying into white supremacy in doing so? When movies like the latest iteration of Mary, Queen of Scots are made in which black actors are playing English earls is this not a type of cultural appropriation as well? Rumors abound that Idris Elba is going to be the next James Bond, a fictional character I grant you but nonetheless a man whose father was Scottish and mother was French. Where is the hue and cry against this among white people?

I ask all reading this to think deeply about this: do we really want to take this madness to its logical conclusion? I think not.

And that is why –eventually–this idiocy will burn itself out.

The question is not a matter of if, but when. In the meantime, how many innocent lives –black and white–will be destroyed before normalcy returns?