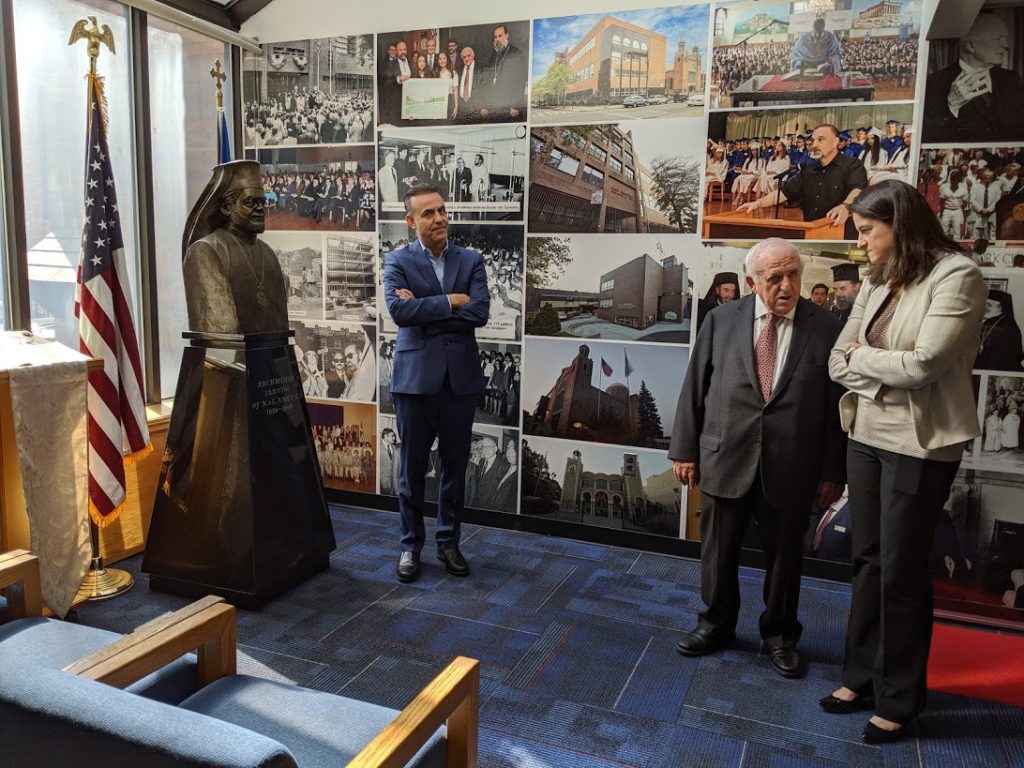 Why did the Niarchos Foundation decide suddenly (2018) to offer a $25 million donation to St.Demetrios School? Whose daughters – with no background in education – were “picked” to serve as board members to a new charter school, obviously on a salary? Why this deafening silence about the multiple “conflicts of interest” in Astoria and elsewhere in GOA? How much longer AB Elpidophoros will protect the “Godfather” Andriotis and his puppets?

By now it should be clear to our readers that the trigger for all the continuous “explosions” in St. Demetrios of Astoria during the last two years was the proposed $25 million donation by the S.Niarchos Foundation (SNF) to St.Demetrios School in 2018 under the condition to drop its religious character and become a charter school.  The bunch of usual suspects, constantly feeding around the school and the community for decades (Andriotis, Koularmanis, Alma Realty, Diamataris et als), saw a big opportunity to step-up their operations.

But that’s about where some more serious questions start: Why on earth did a savvy, world class player, a very well-connected businessman like Andreas Dracopoulos, decide to enter the neighborhood ….playground of Astoria? A partial answer to this question seems to lie in the unofficial information that the money, the same $25 million, were initially headed to another direction, namely to the St. Nicholas Shrine at Ground Zero, where SNF had already made an initial small donation… Former AB Demetrios had said at that time that GOA was pursuing “the Greek Foundations” (Onassis, SNF, Latsis etc.) for additional big donations to St.Nicholas Shrine.  But in early 2018 “all hell broke loose”, as the whistleblower’s reports on GOA (December 2017) became partially public.  This forced SNF to pull out from the St.Nicholas Shrine project (although Mr. Dracopoulos  seemed to have other reasons to feel that the Karloutsos team “betrayed his trust” in the way they handled the earlier SNF donation for St.Nicholas). When finally it became clear that the Feds had started investigating, Diamataris, Andriotis and Koularmanis intervened and convinced SNF that they should be trusted with the money in forming a new charter school.

One thing Andreas Dracopoulos seems to have gained out of the relationship was the possibility of his “promotion” for the office of the “President of the Democracy” of Greece, the highest – symbolically – office in the country. Mr. Dracopoulos was the first person to officially visit the newly elected prime minister, Kyriakos Mitsotakis, on July 9, 2019, right after the election. Diamataris was rumored to have acted as a middlleman, and this raised many eyebrows in Athens… The downfall of Diamataris, at the end of 2019, on the now infamous “fake Columbia MBA” scandal, had as a side-effect the suspension of this idea: How could anyone proposed by the “faker” Diamataris be the next president of Greece? Was there anything else that Dracopoulos expected from his personal involvement in the St.Demetrios donation, a process which included many visits to the School? One of many questions that begs for an answer…

The rest of the “team” proceeded to officially ask for a “charter” from NY Board of Regents.  Our information says that this particular application shows Nicos Alexiou (professor at Queens College) as president of the new Charter “St. Demetrios Greek American School”, (HERE YOU CAN SEE THE REGENTS OFFICIAL DECISION –  ST.DEMETRIOS GREEK AMERICAN SCHOOL CHARTER APPROVAL) with the following members of the board: Van Christakos, Sofia Valiotis, Vanessa Diamataris and Abraham Philip (CFO of ALMA Realty).  The Valiotis and Diamataris daughters, with no educational background, were destined for an easy ride… It was all in the “family”… (Please do not anyone start again with the supposed “privacy” of this info: Most of it is public information – accessible at the website of the NY Regents…)

In early January 2019, the NY Regents approved an “absolute charter” for the school.  Andriotis and Koularmanis tried everything they could to have a “quick” (without much debate) vote of approval in the parish council – as they had repeatedly done in the past when they needed to hide their “schemes”.  They failed, and then Diamataris started writing his thuggish commentary, believing he could force the parish to agree. He and his “theologian” assistant attacked all the members anonymously and the presiding priest, Fr. Nektarios, by name… They failed again and eventually the parish council voted with a clear majority to keep the school under its control.  “If we wanted to make money for the parish, we could easily turn the school buildings into 80-100 apartments producing a huge monthly income for the parish…  But we preferred for the school to remain both Greek and Orthodox….”, I heard many times from several parish council members….

Underlining the history of the school is a a series of conflicts of interest:  This issue was highlighted recently in a the letter by GOA to the parish, demanding action regarding the “conflicts of interest” of the parish council president Mr. Sideris.  This was a historically unique occasion: The Archbishop raised on his own (no doubt with the advice of his high-powered lawyers) the “conflict of interest” issue.  And what did the parish do? Absolutely nothing…. Zero action… In a recent meeting Gary Sideris was even joking about “conflict of interest”… Unbelievable!… And none of the parish council members attending could raise their hand or point their finger to the real culprits, sitting across the table, not only Sideris, but also Andriotis… Where is your Greek “Filotimo” – this untranslatable “code of honor”?  What are you waiting for?  Are you waiting for any journalists to expose them? Or you are fatefully awaiting the investigators to arrive? Have no doubt, they will arrive… If there was any doubt the investigators are around the corner, AB Elpidophoros would never sent you a letter about “conflict of interest”….

And what is AB Elpidophoros waiting for? Why is he not firing Education Director Koularmanis, who disgraced himself and GOA by filing a lawsuit (according to some professionals, one of the the sloppiest – possibly invalid – legal documents ever written…) against a GOA parish?  Does AB Elpidophoros think that by hiding behind his finger he would attain the stature of a true leader? The only thing that his Eminence proves by not firing Koularmanis is that he likely had prior knowledge about the lawsuit – and this alone is devastating to his credibility, if true… Again, his dilemma is clear: Will he side with the Andriotis “mafia” or with the faithful?

Finally, all these questions and dilemmas may have some substance until the time the federal investigators or other authorities knock at the door of the St.Demetrios Parish… When this time comes – and it is close – there will be no place for many of the above to hide…