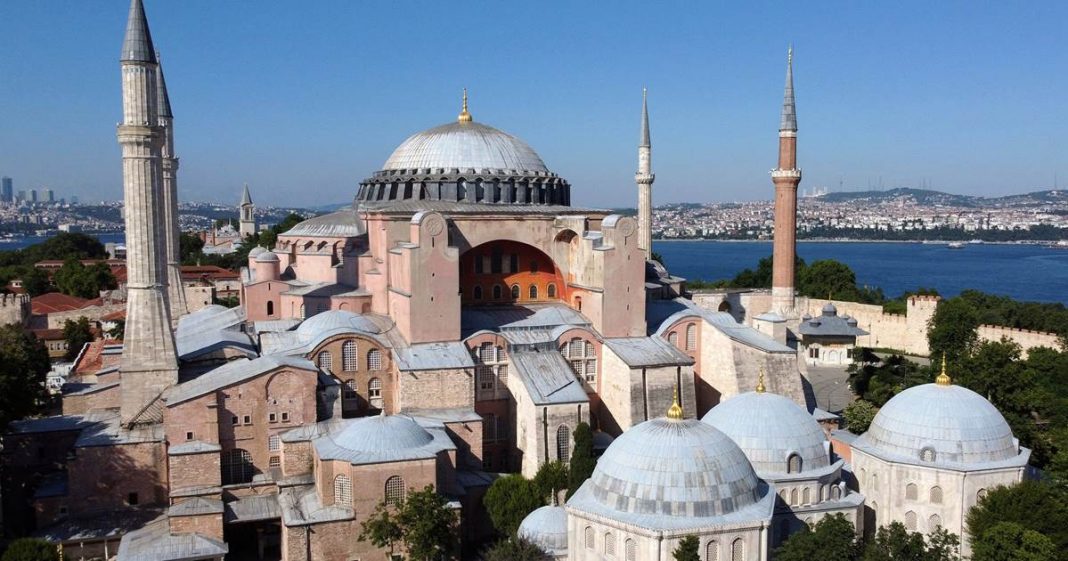 UPDATE (FRIDAY JULY 10, 2020):  Turkish President Erdogan has finally realized his threat and turned Hagia Sophia into a mosque.  The State Department issued another statement and European powers expressed their dismay… Russia expressed “sorrow”… The Greek American community and its organizations are going through the moves… AHEPA, Manatos and others pretend they are doing something…. Karloutsos, who is fundraising full time for Biden, has still to get a statement out of the senile democrat presidential candidate…

The only power that could easily have stopped this action would be Russia. Should I remind everyone that President Putin was the one who achieved the re-opening of the historic Panagia Soumela Monastery in Pontos (Eastern Turkey) a few years ago? It would be even easier now, as Erdogan needs him in so many ways… But after the “Ukrainian Autocephaly” debacle (“Ukrainian Cacocephaly” – “Ουκρανική Κακοκεφαλία” -is now being called laughingly everywhere), the Russians will not raise a finger… Why should they? If Karloutsos and Bartholomew want to act like CIA operatives in the Ukraine, then let the CIA and the State Dept. deal with this hot potato… They may even go a step further and ask Erdogan to expel the Patriarch from Constantinople… It is to their advantage…

President Trump could do the same thing he did with Pastor Andrew Branson and make Turkey pay a heavy price… But he is in no rush…. He knows that our so-called “leadership” is supporting his opponents… He knows they are with “Black Lives Matter”… Why rush?  He is more likely to let the whole situation slide until after the elections… Then a complete negotiation and agreement with the Russians can take place on all open questions… Libya, Ukraine, etc… Including the territorial “integrity” of Turkey….

EDITOR’S NOTE – July 8 (Nick Stamatakis): A quick search of the news today, regarding Mr.Erdogan’s latest attempt to convert Hagia Sophia to a mosque, is certainly revealing the urgency of the situation.  The headlines of major newspapers on both sides of the Atlantic are screaming that the danger is real and it has mainly to do with the major impasse the Turkish president is facing within his country, where his popularity is diminishing very fast…

At the same time his arrogance and his ambition to become the leader of the Islamists worldwide have never been more pronounced.  The geopolitics of the situation are favorable to Erdogan, with the United States locked in a fierce internal battle for power, just a few months before the election, while Moscow has no reason to “stress out” for the Constantinople Patriarchate, after the “Ukrainian Autocephaly” debacle. On the opposite, Moscow may have real interest to see the Patriarch expelled, so its own status be finally raised to the long desired “Third Rome”….

For the past three years, this writer has been warning of the dire consequences Batrholomew’s and Karloutsos’ geopolitical games in the Ukraine would inevitably produce. What reasons did Pat. Bartholomew have to create an enemy out of Moscow, since the latter recognized Constantinople’s primacy?  For over six decades, after the end of WWII, the Ecumenical Patriarchate was playing a quiet role in supporting US foreign policy, without alienating the Russian Church.  But the “activist” Karloutsos, with his insatiable appetite for power and money, “advised” Pat. Bartholomew that there was a lot to be gained by acting as a U.S. foreign intelligence “asset” (although some sources suggest that they may have been “forced” to do so, due to the illegalities and the corruption surrounding the building of St.Nicholas Shrine at Ground Zero)…

The result of their mad drive to give “Autocephaly” to the 25% of the Ukrainian Orthodox was disastrous. First, for the past two years we are witnessing serious violence between the two major Orthodox Churches in the country, as the 25% tries to take away the churches belonging to the majority of the 70%… Second, they achieved the Schism in World Orthodoxy… Third, the close relationship between Putin and Erdogan makes very doubtful that the Russians would intervene to save Hagia Sophia, much more to prevent the possible expulsion of the “Rum” (“Roman” / Greek) Patriarch from Constantinople… Greece is no position to help, mired in continued financial problems and lead by an impotent and corrupt political elite, founded on genealogy and not merit…

The United States did for the past 40 years next to nothing for a minor issue, the re-opening of the Halki Seminary, at a time when they could project considerable influence on Turkey’s politics.  Today, as the two former allies are struggling to delineate new boundaries of cooperation, we should expect even less… The US will limit itself to a few statements by the State Department…. And it will let the issue slide past the November elections…

In the meantime, one more major catastrophe is awaiting Hellenism… For one more time in our history, we will know where to find the culprits: among us…  And it will be clear who to blame: Pat.Bartholomew, Karloutsos and even AB Elpidophoros – who, a few months before arriving to New York, managed to write a geopolitical essay on the Ukrainian Autocephaly…  Congrats to all – you proved your disastrous leadership beyond any doubt…. 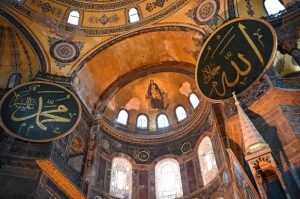 From 1915 to 1923, the Ottoman Empire, the forerunner of modern Turkey, systematically killed more than 2 million Christians — 1.5 million ­Armenians and half a million Syriacs, Assyro-Chaldeans, Greeks and Maronites. During that ­period, half the populations of Tur Abdin and Mount Lebanon, among the Middle East’s final Christian strongholds, were slaughtered or died of famine.

To this day, the Turkish government denies this genocide. Now, what remains of the country’s Christian heritage is under attack from President Recep Tayyip Erdogan. The latest ­assault: The Islamist strongman wants to convert the Hagia ­Sophia, his nation’s most recognizable landmark, from a ­museum to a mosque. The move would all but complete the erasure of Turkey’s Christian heritage that began with a genocide a century ago.

Consecrated as a Byzantine ­cathedral in the 6th century, the Hagia Sophia (“Holy Wisdom”) was once Christianity’s largest cathedral and the historic seat of the Orthodox patriarch of Constantinople, as Istanbul was known for much of the last two millennia.

Eastern Christians for centuries viewed the cathedral as an unparalleled pilgrimage destination. Its relics included supposed pieces of the original Cross of Jesus Christ, as well as the lance that pierced the Nazarene’s side. Pilgrims sought healing from these and other items. You might say the Hagia Sophia was the Saint Peter’s Basilica of Eastern Christianity.

In 1453, following the defeat of historic Byzantium, the Ottomans converted the cathedral into a mosque as a symbol of their dominion over Turkey’s ­indigenous Christians. In the process, they desecrated and plastered over the early Christian icons, mosaics and frescos — though some pieces remain.

In 1934, Mustafa Kemal Ataturk, the secularist founder of modern Turkey, converted the Hagia Sophia from a mosque into a museum, as “a monument for all civilization.” This allowed people of all faiths to marvel at the Christian icons and the sheer beauty of the site without a religious litmus test to enter.

Erdogan, however, is unapologetically nostalgic for the days of the Ottoman Empire. His plan to convert the Hagia Sophia into a mosque is of a piece with his ­Islamist vision for the country, a vision that sits uncomfortably with the Hagia Sophia, a gigantic monument to what used to be called Christendom — right at the heart of Turkey’s most ­important city.

He mustn’t be allowed to go forward.

Clear statements from Secretary of State Mike Pompeo and Ambassador-at-Large for Religious Freedom Sam Brownback supporting the preservation of the Hagia Sophia as a museum are encouraging. But they lack the weight of the Oval Office. Now is the time for President Trump to recognize Turkey’s barbarous recent history — and to compel Erdogan to respect the heritage of his country’s indigenous Christian population.

Trump has made religious pluralism a centerpiece of his foreign policy. The seriousness of that commitment stands or falls in Turkey, a country that has ­become increasingly hostile to religious liberty. It’s why Trump should press Turkey to honor the status quo of the Hagia Sophia. This would follow his successful application of pressure on Ankara to secure the release of American pastor Andrew Brunson, a former prisoner of conscience in Turkey.

Beyond these historic and cultural issues, the United States should more broadly reassess its relationship with Turkey — a move that is long overdue.

The world’s most notorious genocide denier, Erdogan, is also infamous for imprisoning journalists and public intellectuals. Turkey’s egregious human-rights violations also include the ethno-sectarian expulsion of Syriacs in northern Syria and the destruction of more than 500 Greek Orthodox churches in Turkish-occupied areas of Cyprus.

At one point, Turkey was a reliable, pro-Western ally. But that is no longer the case, and the American people are always better off when foreign policy deals with reality as it is, rather than as we would wish it to be.

Persuading Turkey to maintain the Hagia Sophia’s status quo would be a monumental step in the right direction — and cement the president’s legacy as a stalwart advocate of religious pluralism in the Middle East.

Toufic Baaklini is the president of In Defense of Christians.