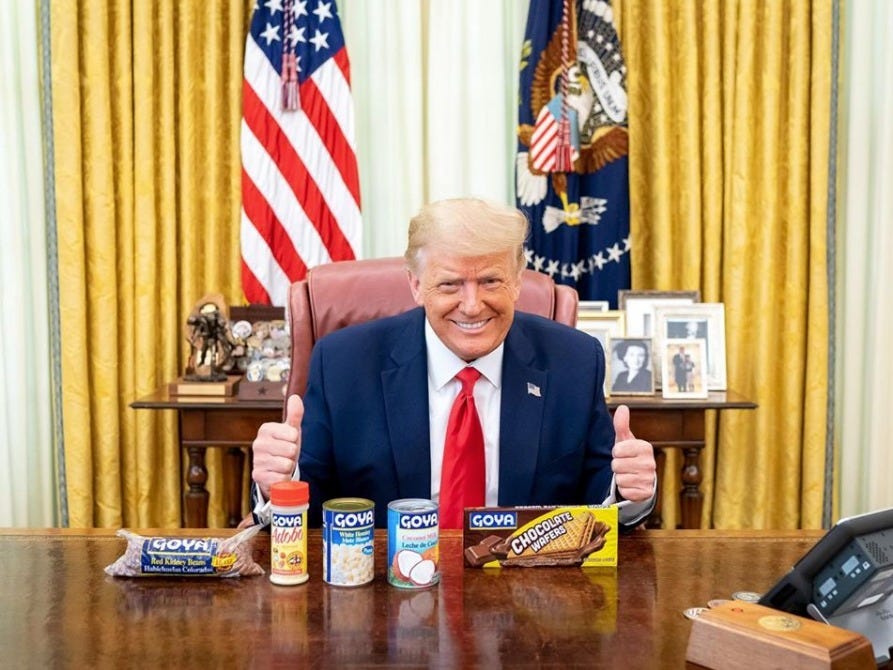 EDITOR’S NOTE (Nick Stamatakis): I have said many times that the leftists of the democrat party have a habit of regularly committing suicide. What is the root cause for such an attitude? It all fits in one word: ARROGANCE!…  We saw it in 2016 when Hillary proclaimed all of us who would not vote for her as “deplorables and irredeemables”…  We have been witnessing it for the past few weeks with the looting and the riots, the uncontrollable demolishing of statues and above all the “defund the Police” movement.  Does ANYONE believe that the democrats will win even one vote with such extreme positions? Not only they will not win any votes but they are losing support in a massive way… Finally, the boycott of GOYA, the famous Hispanic foods brand is truly the definition of political suicide: Generations of Americans of all ethnic backgrounds and not only Hispanics have grown with these foods and love them.  But stupid – really stupid – Alexandria O.C. thought that her “authority” would overcome even such a powerful basic human instinct, such as the need for food…  Sorry AOC, your stupidity exposed your extremism…The American people will punish you with 30-40 years in opposition where you will have a good chance to learn your lesson so not to be another Bernie Sanders… In the meantime, the people emptied supermarket shelves from anything with a GOYA logo on it….

BRICK, NJ – A left-wing organized boycott of Spanish-American owned Goya Foods has backfired on America’s left.  Today. supermarkets across the country struggle to keep GOYA products on their shelves.  Goya products are now becoming as hard to find as toilet paper during the COVID-19 lockdown.  Even people who might not have bought Goya products before have been making an extra effort to support the company.

Did you know? You can buy Goya online at Amazon?

The left has inadvertently expanded the company’s customer base from a predominantly Latin-American population to the Trump base after it called for a boycott when the CEO praised the efforts and presidency of President Trump.

From Friday:  The liberal left has once again lost its mind as it lashes out and organizes a boycott against GOYA, a company that was founded by a Spanish immigrant in the middle of the twentieth century that built a worldwide enterprise out of nothing but the American Dream. GOYA just donated 1,000,000 pounds of food to those in need during the COVID-19 pandemic.

Goya Foods, America’s largest Hispanic owned food company, has made an initial donation of over 200,000 pounds of food, equivalent to over 170,000 meals, to organizations, food banks, food pantries, and soup kitchens, as well as over 20,000 protective masks across the nation.   Goya will continue to donate to those facing hardships during the COVID-19 pandemic.

“We are faced with an unprecedented national crisis and Goya has always stepped up to the plate in times of desperate need.  As an essential business, our Goya teams are working 24/7 to meet the overwhelming demand for food and ensure that supermarket shelves nationwide are stocked with nourishing products, while also providing food to communities who are food insecure or not able to get to supermarkets,” said Bob Unanue, President of Goya Foods back in April when the company began donating the food.

HUNDREDS OF GOYA RECIPES, CHECK THEM OUT!

“We’re all truly blessed at the same time to have a leader like President Trump, who is a builder,” Unanue said.

Today he said the backlash against his company is “suppression of free speech”.

“So, you’re allowed to talk good or to praise one president, but you’re not allowed to aid in economic and educational prosperity? And you make a positive comment and all of a sudden, it is not acceptable,” Unanue said.

Unanue said Trump reminds him of his grandfather who founded the company and he refuses to apologize.

“Oh look, it’s the sound of me Googling  ‘how to make your own Adobo’,” left-wing socialist Alexandria Ocasio-Cortez tweeted.

As part of the Hispanic Prosperity Initiative, an executive order implemented to improve Hispanic American’s access to educational and economic opportunities, we’ve donated one million cans of American-grown chickpeas and one million pounds of products to food banks across the nation who are in desperate need of food for families impacted by the COVID-19 pandemic.

We are honored to be a part of the Hispanic Prosperity Initiative and to support and celebrate the contributions of the Hispanic community. We are committed to our country and the need to give back because it is the right thing to do. Our country faces a time of historic challenge but we will meet that challenge together and continue to work towards greatness, focus on a strong recovery, and hold onto the hope for a healthier future for all.

Through the company’s Goya Gives program and since the company’s humble beginnings, Goya has a long history and tradition of supporting communities in times of disaster. Goya has always supported health, nutrition and educational initiatives as well as donated millions of pounds of food to food banks, organizations, schools, hospitals and healthcare providers worldwide.