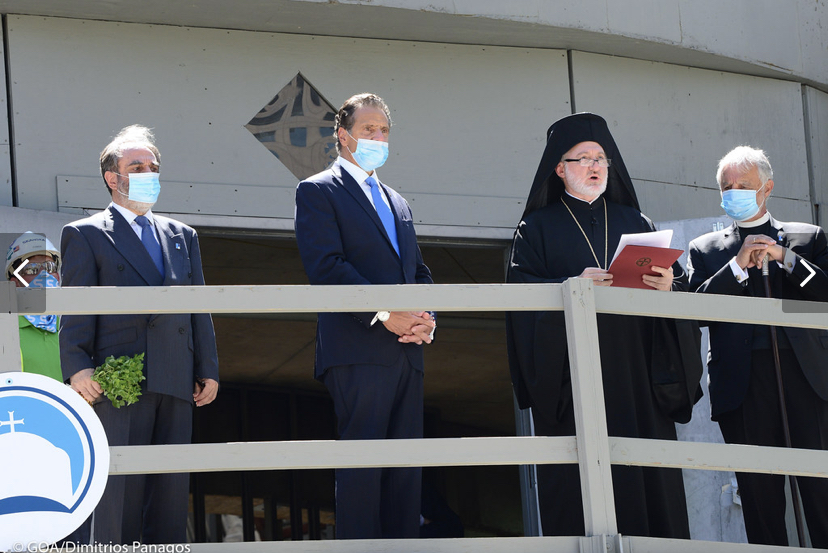 PHOTO: Just in case you are wondering who is the “groom” on the left, he is Father Drossos, a Greek Orthodox priest, close advisor to AB Elpidophoros… Is this the appearance of ANY priest, Orthodox or Catholic – and (in many cases) even protestant? Welcome to the new directives by GOA…

All the good faith in the world would not be enough to cover the hipocrisy of those who used their power and money to promote the commencement of re-building St.Nicholas at Ground Zero – and I am referring mainly to Catsimatidis and Karloutsos, who took to any mass media available to peddle their “myths” to the general public… It’s very doubtful whether they convinced anyone – even the most “innocent” minds among the wider American audience have heard of the various legal and financial troubles surrounding St.Nicholas.  But one thing is certain: By referring once again to the “mismanagement of the previous archbishop” and attributing the missing money to “a little bit of an overran” Karloutsos managed to alienate even the few people left supporting him within the Church, while he made everyone else want to throw up… What will it take for him to finally understand that his time has passed and that every time he opens his mouth he is degrading anything the rest of us consider sacred and holy? Maybe a set of handcuffs will do the trick? We have unfortunately come to this last resort…

BUT the faithful were furious!… They posted so many negative comments, the Archdiocese was forced to shut down the comments function on their youtube channel!… They were all negative by 95%…. A small reprieve for the rest of us… HERE IT IS:

Comments are turned off.

Worship only God, not yourselves Isaiah 64:6

To Be Honest21 hours ago

Did he ask for forgiveness for killing several thousand of the elderly?

Religious leaders standing with the guy who celebrated 9 month abortions even if woman is in labor. Priceless hypocrisy!

So the money we sent in years ago has been accruing interest ,great about time.

Any of them in jail?

Hmmm… there’s been enough money collected over the years not to mention what insurance or federal assistance they received to build two churches. Where’s all the money? Oh yea, I better shut up I won’t go to Heaven.

100% agree! The beautiful example of simplicity and modesty of the previous building will be replaced with a cement monster – the main difference being that some people will make lots of extra $$$.

This is NOT a church. It is literally a tourist attraction where anyone of any faith will be able to pray in there. So Muslims, Hindus, etc. will be able to observe their own faith in there, which goes against our entire doxology.

With all the new money combined with the “misappropriated” money we could have rebuilt a NY Hagia Sofia. #kleftes #shame

I won’t contribute not one dime with a hole in it (you know…. ούτε μια τρύπια δεκάρα) to this project. The Greek Orthodox Archdiocese of America had a GOLDEN opportunity to build a beautiful, authentic, Byzantine-style Church as a testament to the glorious Orthodox Faith, and they botched it in more ways than one. They got some architect who pocketed millions and came up with a design that looks like a nuclear reactor! And you know what? I have heard that there were other architects and iconographers that were willing to DONATE THEIR TIME (i.e. FREE OF CHARGE, except for materials) to this project. And instead, the GOA ignored them. Coupled with the fact that the cost went up to $80 million, my response is, “ARE YOU KIDDING ME???” Αυτοί που τα τσεπώσανε, ας τα δώσουνε πίσω. What a shame, really. This project is nothing but a disaster. I am not impressed.

The new ecumenical world orthodoxy praying center where all faiths can pray together to their one true god. No thanks I’ll stick to the Holy Trinity !

Honestly, everyone in NY that’s passed by that half completed building for the past how many years is probably laughing at the Greek Orthodox Church of America. Not only is it ridiculous that a religious association would misappropriate and steal funds, but also, Greeks are the second wealthiest immigrant group in the US and the fact that we couldn’t get our shit together and just get this done by now is literally so telling of the community.

Yes it is and the they protect the thieves

Comments are turned off. Learn more

Comments are turned off. Learn more

ill no were near finished ? The longer it takes the more theft !

Fellow Greeks. That’s it really. Not Orthodoxy, Hellenism. What a huge missed opportunity for Orthodox witness. Just a fancy “Greek church”. An exotic Mediterranean oddity, purely for tourists consumption, since there was only a old former bar, turned church near there before 911. Maybe there’ll open a diner or gyro pit next door. It should be the centerpiece of orthodoxy in America, but no. Just another overbuilt Greek church. 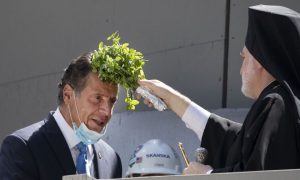 No matter how much “Holy Water” / Agiasmos you splash on a “Baby Killer” he will always be a baby-killer!!! What is our Church’s position on abortion? Even more, on abortion during/after birth?

Here is one more example of Karloutsos Family arrogance.. A few days after Mike “Fredo” Karloutsos was sued in the now famous “Greek Pot” case (containing very serious allegations), instead of worrying about going to jail, he found it fine to come out of his “hole” and express his “pride” for “Daddy”…  Enjoy the display of shameless hypocrisy… 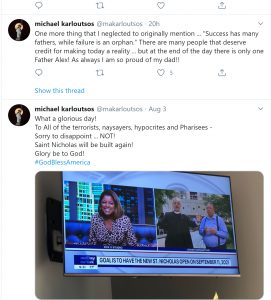 And this from a friend who could not help but overhear the private exchange between the two “Godfathers”…. 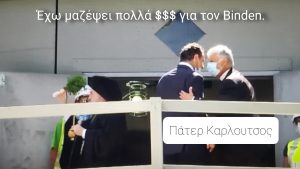 Finally, because I know that these faithless so-called “leaders” will throw any number of baseless accusations at me, I am re-posting here what I had originally published on the occasion of the ceremony of October 17, 2014, the blessing of the foundations of St.Nicholas. I, and all of us, were filled with hope and good will – despite the obvious excessive costs and the rest of the problems… NOW WE ONLY DEMAND ANSWERS….

“An endless fountain of divine gifts”, as the Orthodox Hymn to Saint Nicholas poetically says, may the new Church and Shrine at the hollowed space of Ground Zero be.  The new Church, whose ground breaking ceremony takes place this Saturday October 18, 2014, will be a place of remembrance and prayer for the relatives and friends of the thousands of souls lost on September 11, 2001, for all New Yorkers, all Americans and all people.  Let this Shrine be a place of personal recollection, an oasis amidst the busy streets of the World’s financial center.

Let it also be a place of humility, as the previous Church of Saint Nicholas had been for many decades; in its four floors it loomed taller than the 110-floor towers next door, and mysteriously managed to shade their immense presence with its spiritual light, instead of being overshadowed by them. Let this Shrine be a breakwater to human vanity and greed, let it spiritually guide its visitors to obtain “through humility greatness, through poverty riches”.

Let the Church of Saint Nicholas be what it always was, the guardian angel of Greek seamen and all seamen.  Even if these seamen now occupy luxurious offices a few blocks away, even if they are now preoccupied with the ups and downs of financial markets rather than sea gales… All Greeks deeply believe that a seaman without Saint Nicholas in his heart will find his ship smashed on rocky shores…

Finally, let the beautiful designs and ambitious plans, as well as the operation guidelines for the New Shrine, incorporate the principles emanating from the life of Saint Nicholas himself, a truly Ecumenical saint, as well as the teachings of Christianity: Love, Charity, Humility. Let the many benefactors from all over the Earth, who offer their donations for the building budget of the Shrine, kneel in front of the teachings of Saint Nicholas, whose image remained into the Ages as the personification of anonymity and the eternal example of selflessness.