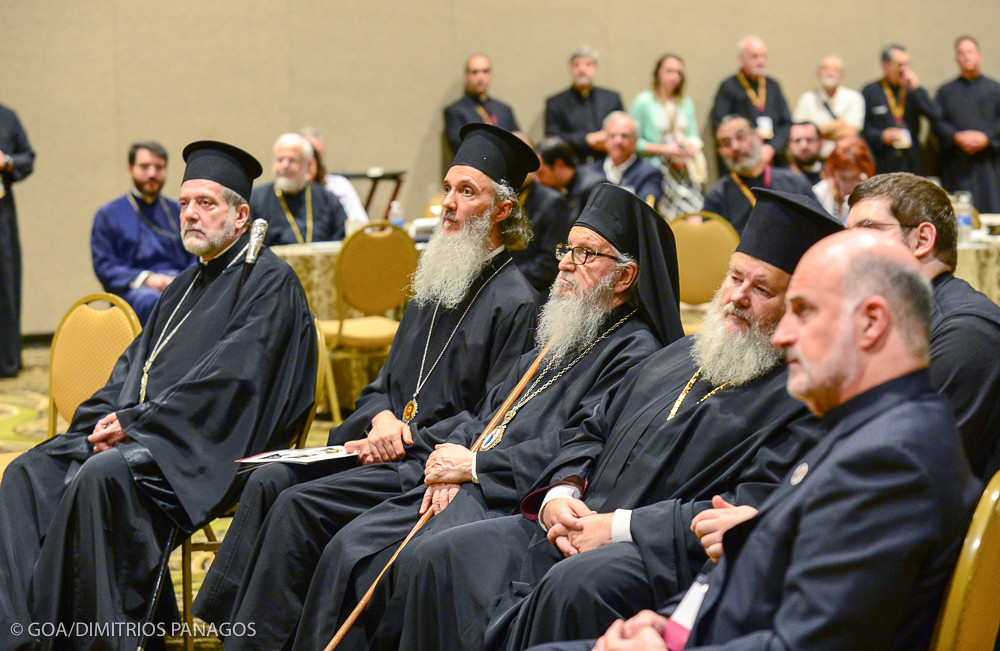 WOW! Where to begin?

Are we a non-profit organization or a Church?

First, we would recommend that the Archdiocese live up to their commitment for transparency, and publish the entire recording of the today’s meeting that occurred between the Archbishop and the GOA clergy.

Second, we will not be surprised if we soon witness a class-action lawsuit start to be organized by the clergy as a result of this meeting with the Archbishop.

Third, the GOA clergy are angry. VERY ANGRY! Today’s meeting will have drastic consequences for the future of the Archdiocese. One such consequence we may likely see is multiple Metropolis Syndesmoi petition their local Metropolitan to have the Archbishop removed immediately. After all, the Eparchial Synod removed Archbishop Spyridon for far less.

For the pious laity who did not hear what came out of the Archbishop’s mouth, let us try to offer some major points from today’s conference call.

Priests are a burden on the Archdiocese

That is the ultimate take away from today’s meeting with the Archbishop.

The Archbishop made one thing very clear: the current pension program is not financially viable. His Eminence also confirmed that the pension was $65 million dollars underfunded, not $50 million as they previously reported.

Elpidophoros said that if the clergy wanted to stay with the current pension program, the clergy would be responsible for developing a fundraising plan to support their own pension.

The clergy asked how that would be possible when past attempts to do so has resulted in rejection by the Archdiocese and the Eparchial Synod.

More importantly, the clergy on multiple occasions mentioned that it is not the clergy’s fault that their employer (a.k.a. the Archdiocese) did not offer any contributions to the pension plan over the last 15+ years, which ultimately led to the pension program being underfunded. The priests asked repeatedly if the Archbishop was willing to have the Archdiocese make a commitment in future budgets to pay for the past, present, and future obligations to the pension program to make it whole again. And basically the answer from the Archbishop is no. He is not willing to do that.

The Archdiocese is attempting to walk away from any accountability to a situation that they created. The Archbishop was unwilling to repent for the Archdiocese’s past actions, while still insisting that we trust them now. If the Archdiocese can get away with not contributing for the past 15 years, how on earth does anyone believe they will contribute over the next 15 years? Elpidophoros wants the clergy to trust him, but offered no reasons for us to do so.

The Archbishop was quick to comment about how we cannot assign blame to anyone for any past transgressions. It is okay for Michael Psaros and Father Alex Karloutsos to be quoted in The National Herald blaming Archbishop Demetrios and Jerry Dimitriou for all the past mistakes, but the Archbishop said we gain nothing by assigning blame.

There was one comment that was made towards the end of the meeting by Father Nicholas Karloutsos, a Clergy Representative from the D.A.D. on the Benefits Committee, who made an important comment. He stated that should the Archdiocese (i.e. the Benefits Committee) end the current pension plan, the Archdiocese will no longer be legally obligated to contribute any money towards it.

Throughout the meeting the Archbishop claimed that each person would be entitled to his or her accrued contributions. The Archbishop also claimed that the pension is funded until about 2054, but offered no clarification about how much is currently in the pension fund. But this is where we need to think very critically about the comment by Father Nicholas.

At some point the money will run out in the fund, and not everyone will receive his or her accrued contributions as promised by the Archbishop in today’s meeting.

This is how the Archbishop attempted to trick the clergy. We hear false promises for the clergy to not worry, that we will get our contributions (so long as there is money in the fund). If the Archdiocese no longer has a legal obligation to fund it, where else is the money going to come from?

Do not ask the Benefits Committee for an answer because they having being trying to find out.

The Archbishop also made it very clear he was not in favor of liquidating any of the Archdiocesan assets to fund the clergy pension program. The Archbishop was also not in favor in dissolving the current pension program because the Archdiocese would actually have to pay the money they owe to the priests, which as well all know, they do not have enough money to do that.

The Archbishop attempted to claim that a transition to a new plan would be beneficial because it takes away from some of the worries about trying to guarantee a certain rate of return on the investment for the current pension program. With all the uncertainty regarding future events, the rate of return is something that cannot be guaranteed and therefore, the Archbishop said it would be better for the clergy to have direct control over their investments.

But that same logic applies to a direct contributions plan (D.C.). Investments are going to be impacted no matter which plan we have. We know that under any new D.C. plan, the potential to earn more from our investment is certainty not better than the current plan because there is less being invested under a new plan.

Father Milton Gianulis attempted to argue that under a new pension program, our contributions have the potential to be received not just by our spouse, but also by our children, which is a benefit currently unavailable in the current pension plan. However, in order for that to be true, it would require there to be a substantial amount of money saved in the account which was not used before the priest died.

As the Archbishop clearly stated, priests barely get paid enough to build up a financial savings. There is not one priest who attended today’s meeting that will be able to save enough through a Direct Contributions plan to give enough to their children after they die, thus making Father Milton’s comment pointless. As we previously mentioned, beware of priests like Father Milton who offer a suggestion that intended to help the Archbishop, but has no real benefit to the clergy.

Where do go from here?

There are multiple solutions to this problem, but Elpidophoros will not like them.

1) Find a new Archbishop willing to fight for the clergy, and not put the burden of finding money on their shoulders. The priests contributed their fair portion; it is time for the Archdiocese to step up and fulfill their obligation.

2) Eliminate the $1.5 million dollars a year that goes to the Ecumenical Patriarchate.

3) Have all our bishops take pay cut.

4) Insist that the Archdiocese find money to pay for their past and current financial obligations to the program. If they are unwilling to meet their legal obligation, formulate a class-action lawsuit so that they may fulfill their responsibilities to the priests who have sacrificed their lives in service of the Church.

One thing is certain, it will be very difficult to find a priest who supports Archbishop Elpidophoros after today’s meeting.