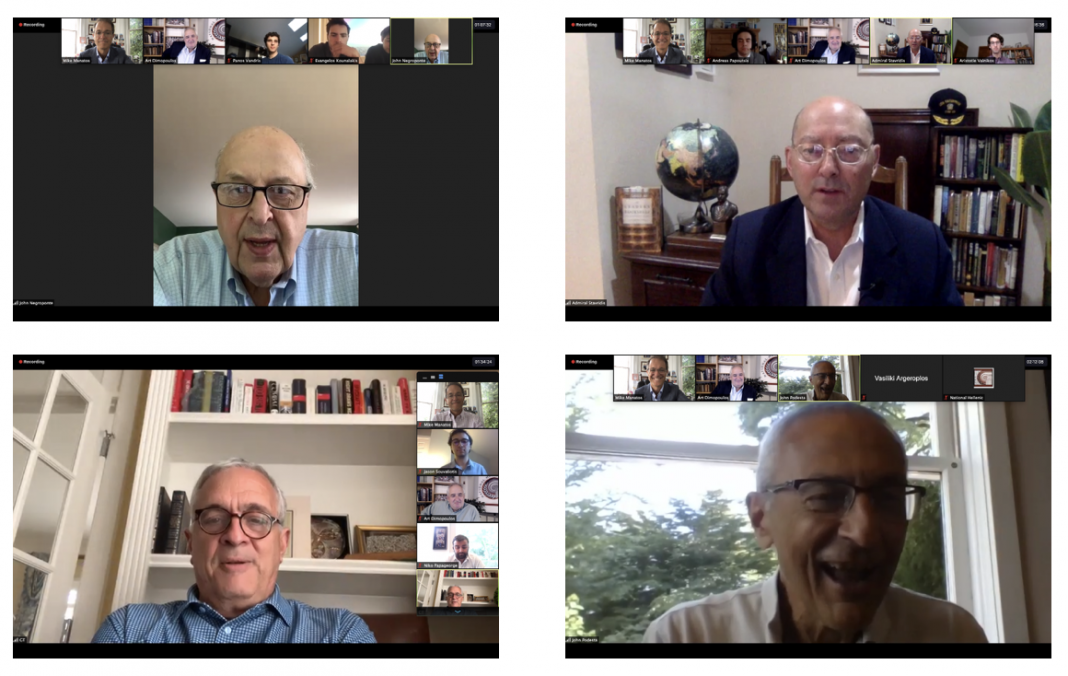 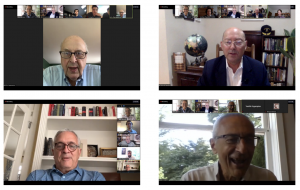 PHOTO: The usual “suspects”, members of the Democrat Swap”… John Negroponte (top left), James Stavrides (top right), George Tenet (bottom left), John Podesta (bottom right) take part in the recent Manatos event…
=======================================================
By Alex Aliferis
Manatos & Manatos and the National Hellenic Society hosted the 5th Annual Heritage America Program on July 8-10, 2020 with 44 speakers emphasizing “how Hellenic and Orthodox principles and ideals helped them achieve success.”
Is this a joke?
First, let’s take a look at the speaker list. The vast majority is Democrats and connected to the Greek American Democrat Establishment Elite. Yes, there are a few, very few, Greek American Republicans but they are the exceptions by far. John Podesta is the Godfather of this network with his buddy George Soros who finances him.
Second, what Hellenic and Orthodox ideals and principles assisted them in their success? The Washington DC is a vast swamp that needs a good draining. We could do our little part by draining the Greek American Democrat Establishment Elite in Washington DC. It’s about who you know gets the job. How did Michael Karloutsos obtain a job in the State Department? His dad, the so-called priest, Father Karloutsos in essence handed it to him. Father Karloutsos is close friends with the Clintons and the Bidens. I doubt that Michael applied for a State Department position and waited for an interview? Think daddy’s connections. The Manatos family connections obtained jobs for the new generation of the Manatos family. It’s the same way Joe Biden helped his son, Hunter Biden, obtain a board position with Ukrainian Oil Company, Burisma, with no energy experience – and mad a couple of million in the last few years… To add to many more millions from the CCP / China deals… The Manatos family is active in the swamp since the 1960s.
Third, the dirty little secret in Washington DC is that your connections get you a job. It’s about who you know. If you have no connections, good luck finding a position in the Washington DC swamp!
I played my cards wrong while working in Washington DC. I thought hard work and sweat, the old fashioned way, would get me to the top. Was I promoted during my time in the Washington DC Greek Lobby? No. Did they mentor me to get into a better position in DC? Not a chance. I saw many great Greek Americans come and leave DC in disgust because their daddy was not a Greek American donor. I saw many sons and daughters of wealthy connected Greek American obtain great positions around the swamp area. Those with a huge connection get first dips of jobs in DC. It’s a joke how they advertise jobs, because they know who will get it. With the roll of dice, one can find something in DC. The lucrative positions are connections.
Where were these people to defend George Papadopoulos when he was falsely framed by the Deep State in order to overthrow President Trump? Why wasn’t George Papadopoulos one of the speakers in their 2020 event? Paul Orfanedes is Director of Litigation for Judicial Watch. He is a Greek American Republican. Paul is taking the Clintons, Soros, and others to court along with the Deep State. Judicial Watch exposes George Soros, Clintons, Dr. Fauci and their foundations. He has been fighting the Deep State in Judicial Watch. Why is he not part of the “Greek Lobby”?
I met many Greek American Republicans in Washington DC. Robert Spencer wrote books exposing Islam. His www.jihadwatch.org exposes the jihadist agenda with Pamela Geller. Robert Spencer’s Greek origins come from Smyrna. What about Jim Jatras, a Greek American Republican, who offers excellent foreign policy analysis with his articles and interviews on Russia Today?  I can name countless Greek American Republicans while I worked in conservative organizations over time.
Why are Greek American Republicans excluded?
============================================
Alex Aliferis has worked in Washington D.C. on issues linked to Greece, and Cyprus.
For More Information:
Manatos 5th Annual Heritage America Program:
(Top US Policymakers Mentor Greek-American Students in 5th Annual Heritage America Program – Manatos & Manatos)
John Podesta and George Soros Connection- Their Manchurian Candidate Obama:
https://humanevents.com/2010/09/09/the-obamasoros-connection/