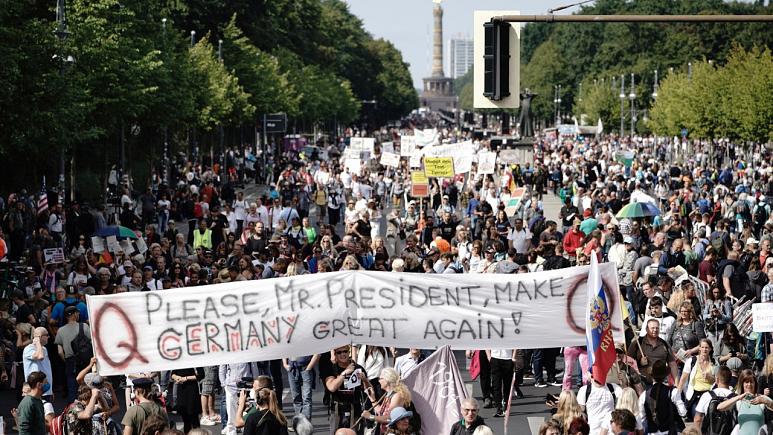 Police in Berlin broke up a protest against coronavirus curbs on Saturday and arrested 300 people after demonstrators failed to social distance and wear masks, as other European cities held similar “anti-COVID” marches.

Police in the German capital disbanded the mass protest against COVID-19 curbs just several hours after it started.

“Unfortunately, we have no other option,” Berlin police said on Twitter. “All the measures taken so far have not led to compliance with the conditions.”

Around 38,000 coronavirus sceptics marched in Berlin after a court initially gave the go-ahead for the demonstration.

“We’re here to say: we have to be careful! Coronavirus crisis or not, we must defend our freedoms,” Christina Holz, a 22-year-old student, told AFP.

With new coronavirus cases rising since lockdown measures were lifted several months ago, European countries have implemented tighter regulations to contain the outbreak that has killed more than 800,000 globally.In London, around 1,000 demonstrators calling for an “end to medical tyranny” gathered in Trafalgar Square.

In Paris, up to 300 protesters marched against the government decision to make mask wearing compulsory in all public areas.

“I am simply a citizen angry against the freedom restricting measures which have no medical justification,” said Sophie, a Parisian who took part in the protest.

Protesters in the French capital, some waving placards stating “Stop the lies”, were quickly surrounded by police who handed out 135 euro fines to those not wearing masks.

Some 1,000 people in the Swiss city of Zurich also called for a “return to freedom”.

Protest organisers and supporters were outraged by the move and flooded social media with messages they would protest anyway, with some calling for violence.

But on Friday evening, Berlin’s administrative court sided with the demonstrators, saying there was no indication that organisers would “deliberately ignore” social distancing rules and endanger public health.

The far-right welcomed Friday’s court ruling. Leif-Erik Holm, a lawmaker for the anti-migrant AfD party, called the decision to overturn the protest ban “a victory for freedom”.

“I am not a far-right sympathiser, I’m here to defend our fundamental freedoms,” said Stefan, a 43-year-old protester at the start of the demonstration.

But several groups held counter-protests against the main demonstration.

“There must be no tolerance towards racists, anti-Semites, right-wing extremists and Nazis,” said left-wing MP Anne Helm.

“That is why I call on all Berliners to take part in the counter-events.”

The “anti-corona” rally comes as Chancellor Angela Merkel announced tougher coronavirus measures as the country reports an uptick in cases since April.

On Friday, Germany announced a minimum €50 fine for people caught not wearing face masks where it is compulsory.

“We will have to live with this virus for a long time to come. It is still serious. Please continue to take it seriously,” Merkel said.

Meanwhile France said on Friday there had been an “exponential” rise in coronavirus cases with more than 7,000 new infections in 24 hours.