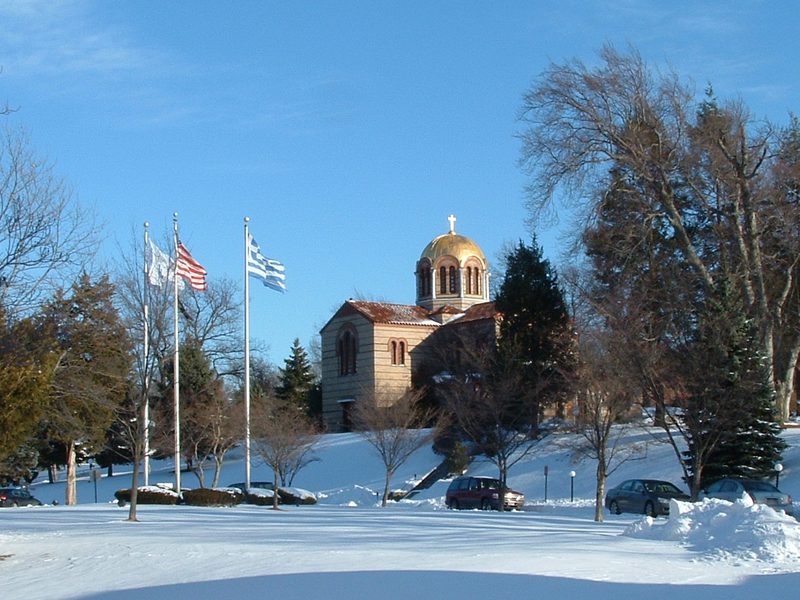 Since 1966, Holy Cross expanded its undergraduate division into a full four-year liberal arts college named Hellenic College, which opened in 1968.

In 1974, Hellenic College was accredited by the New England Association of Schools
and Colleges (NEASC) or the New England Commission of Higher Learning (NECHE).
Currently, Hellenic College offers programs leading to the Bachelor of Arts degree. It has the following programs: Business Management, Elementary Education, Psychology and Human Development, Classics and Greek Studies, Literature and History, and Religious Studies. Since its inception, Hellenic College has undergoing many stages of development,
unfulfilled expectations fueled by unrealistic strategics goals and expectations. Hellenic College has never been embraced by the Greek Orthodox people in this country who quite the contrary they were and continue to support Holy Cross Greek Orthodox School of Theology because it serves the immediate needs of the Church, educating priest and religious leaders for the Orthodox parishes in this country.

After more than 40 years of existence, in 2019 Hellenic College had its programs only 51
students:
Human Development 11 Literature and History 2
Classics and Greek studies 2 Elementary Education 5
Business Management 5 Religious Studies (A&B) 21
Undecided 3 Exchange (Semester of Faith) 3
In the coming Academic Year of 2020-2021, Hellenic college anticipates having 41 students
enrolled in its programs. Since 2010 Hellenic College has experienced a steady and irreversible decline in enrollment that the COVID-19 has exasperated. On January 9, 2020 the New England Commission of Higher Education in joint Press Release with Hellenic College announced: “At its meeting on November 21, 2019 the New England Commission of Higher Education (NECHE) voted to place Hellenic College, Inc. on probation for a period not to exceed two years because the Commission found that Hellenic College, Inc. does not
now meet the Commission’s standards on Institutional Resources and Planning and
Evaluation. The Commission also issued a Notation to the College that it is in danger of
not meeting the standards on Organization and Governance and The Academic Program.” (Follow the link for the joint announcement here).

The decision of the New England Commission of Higher Education (NECHE) to place Hellenic
College on probation reflects many years of financial mismanagement and lack of processes of evaluating and assessing its administrative and academic structures. The reports of the visitation committees of NECHE on numerous occasions have identified multiple violations that endangered the viability of the School as an institution of higher learning.
Since 2011, Hellenic College had operational deficits that the Administration and the
Board of Trustee has failed to curtail2 until the NECHE in the strictest possible manner
compelled them to operate with a balanced budget without compromising the academic quality of its programs.
2011 (892,811) 2015 (3,469,497)
2012 (838,201) 2016 (2,704,100)
2013 (1,800.838) 2017 (1,374,433)
2014 (285,011) 2018 (2,032,616 unaudited)

The financial information in the Self-Study Report for the visit of the ATS Commission does not explain how these deficits were generated and specifically what aspects of the institution have contributed to their spike. For instance, the Institution had in 2014 a deficit of $285,011 and in 2015 a deficit of $ 3,469,497. Did the Board discuss the causes of this sudden surge of School’s operational deficit? During these seven years, the Administrative staff of the school, its services, and infrastructure were irrationally expanded presuming unrealistic number of students coming to the School and overconfident that the school will raise the necessary funds to meet its increasing operational expenses. Both presumptions were not materialized! Concerning the Financial crisis of the School, the president of the Hellenic College has admitted that the Hellenic College because of low student enrollment and the COVID-19 will still have $ 500,000.00 deficit in the coming financial year of 2021, despite the $ 2,000.000.00 additional grant to 1,500.000.00 that the Archdiocese annually provides for the last two years to the School. The president has chosen to address this challenge of balancing the budget by dismissing the six tenured professors. His decision, given the uniqueness of the school, had to be approve by the Chairman of the Board prior to its submission to the Board. It seems that the financial crisis of the School is deeper and more complicated than what it appears to be in the president’s actions. In the last Board of Trustees meeting (May 21, 2020), it was reported that “Hellenic College Holy Cross received a very generous gift of $ 2, 6 million from the Estate of George Hays. This gift allowed Hellenic College to cover certain revenue shortfalls and cover the School’s outstanding accounts payable. It was also reported that “the donor of a $1.3 million
gift to the previously planned student center has agreed to repurpose his gift toward paying the monthly mortgage of the Barletta property for the next three years.” It is unfortunate that financial director did not provide an updated version of the School’s financial budget that includes and unprecedented infusion of fund. Furthermore, on January 11, 2020, the prime minister of Greece and the Chairman of the Board of Trustees Archbishop Elpidoforos jointly announced that Greece will be giving a grant of two million euros every year to Holy Cross Greek Orthodox School of Theology in support of its survival, programs, and advancement. This grant will be in effect from last year, 2019, and it will continue every year thereafter.3

One wonders what happened with these grants of the Greek government since the school has never explicitly acknowledged the generous gifts of the Greek Government. Furthermore, the Hellenic College currently explores the options to sell 20 acres(?) out of the 59 acres of its campus. This is necessary, according to the president of Hellenic College, because “The elimination of debt is demanded by the accrediting agencies. Only by eliminating our debt can we continue to remain a financially sustainable institution.” Mr. Cantonis believe that “selling our (Hellenic College’s) excess real estate is the most expedient method of achieving that goal set by accreditors.”

Certainly, the huge debt of Hellenic College was not created overnight, it rather reflects failure of the Board’s fiduciary responsibility to oversee the School’s finances. If Hellenic College is challenged to reconceive its future and its viability in its present state, it is because of the Accrediting agencies cannot any more accept promises without any substance and demand fiscally responsible planning of the future of the School. Selling 20 acres from the School’s existing campus, will provide few years of running the school with expectations of a better future only to come to terms with the fact Hellenic College as an undergraduate college is not a sustainable institution and good planning demands the recognition that the entire institutions needs to be radically restructured and learn to live within its limitation. Hellenic College under its present extenuating circumstances urgently needs “to reimagine its operational model as well as the delivery and content of its educational offerings in order to address its current and future financial challenges and fulfill the mission of the Institution.”

In searching for a new “operational model” there is a need to identify the real structural causes of the surging operational deficits so it can be creatively addressed. One of the first issues that it needs to address with vigor and boldness is whether the School needs to refocus its purpose on advancing Orthodox theological studies in the western
hemisphere and educate the clergy and laity for the needs of the Church. Having an
undergraduate College in its present form, size, and quality does not serve the aspirations of the Greek Orthodox Church in this country. There are multiple reasons why there is a need to abandon the idea of having an undergraduate College?

• The decline of enrolments in Hellenic College despite of the fact that the administration
of the School has employed outside consultants on Admission strategies and allocated
significant funds – money that it did not have – to promote the College and its programs.
• The surplus of academic institutions of higher learning coupled with the decline of
student’s enrollment and the increasing tuition costs has affected all small colleges
including Hellenic College. Hellenic College has failed to meet its strategic goals on
admission and its tuitions cost does not make it competitive with state college that most
of the student to turn for their education because they are economically affordable.
• The current debt of the institution and the need to sustain and develop its academic
programs within the limits of its financial constrains is another factor that calls for
reassessment of its academic programs. It is to be noted the finances of the School will be
closely monitored by the Department of Education of the State of Massachusetts in its
concern to ensure that small colleges are viable, and their academic programs are not
compromise by their limited financial resources and irresponsible governance.
• Hellenic College and Holy Cross is financially supported by the Greek Orthodox
community in USA. Given the financial situations of the Archdiocese and the multiple
Church affiliated organization that seek support from the same sources, the School in the
last five years has failed to raise funds and attract significant donors.
• The Orthodox Community in this country is willing to support Holy Cross Greek
Orthodox School of Theology because it serves its need to educate its future priests and
leaders. Hellenic College has been supported as an adjacent institution that contributes to
the mission of the Holy Cross in educating the priest and the leaders for the church.
Considering all these factors, there is a need to focus our effort in what we are doing best and what are the expectations of the Church as they are articulated in the mission statement of Holy Cross Greek Orthodox School of Theology. The argument has been made that Hellenic College with its limited number of students contributes to the viability of Holy Cross Greek Orthodox School of Theology and closure of Hellenic College will adversely affect the financial cost of the School of theology. Of course, this may be partly true, if the school for a variety of reasons and unrealistic expectations persists to operate with a management model that maintains the Schools present administrative and academic structures. St. Vladimir’s Theological Seminary seems to uphold its academic programs without compromising its academic integrity with significant less operating expenses.

At this time, based on the School’s website, Hellenic College continues to advertise all its
academic programs without any notice that some of the programs are problematic. For Instance, the director of the Elementary Education has advised Hellenic College in December 2019 of shutting the program down because it would not receive recertification by the state owning to low enrollment. Furthermore, the College’s program on Management and leadership does not have a full-time director of the program and the Chief Operating Officer of the School serves its interim director.

Furthermore, the school has dismissed the full time senior tenure professor of English and Chair of the literature and History Program after she has published a new book on
Hellenic in Literature that HCHC seems to advertise in its website.

PLEASE FOLLOW THE LINK BELOW FOR A PDF VERSION OF THIS ARTICLE CONTAINING SOME IMPORTANT FOOTNOTES.

Should the GOA continue to Fund Hellenic College_