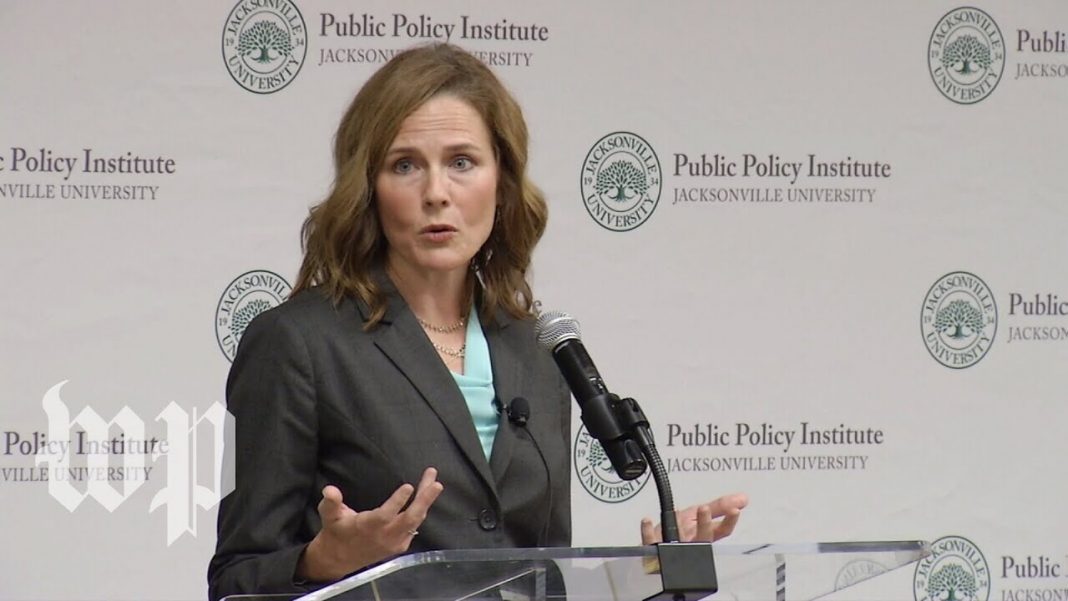 EDITOR’S NOTE (Nick Stamatakis). Many analysts have already agreed on the proper strategy for President Trump and the Republican Party: Nominate a judge from the 20-candidate list which was recently made public and leave the actual vote for after November 3rd, after you demand from Biden to make his own nomination – so the voters have a clear choice… In this way the country avoids the extra turmoil, while the Democrats will be forced to unmask and present their true intentions in the form of a real candidate. The GOP will also avoid internal strife, among many other positive effects, as you will read below.

Who then will likely be President Trump’s nominee? The front-runner is Amy Coney Barrett, who was recently confirmed by the Senate for the 7th Circuit Court of Appeals.  She is a mother of seven, a devout Catholic and an “originalist”. Please follow the link here for her impressive bio.

EDITORIAL BY THE WASHINGTON EXAMINER

When it comes to raw political power, Republicans could replace the late Justice Ruth Bader Ginsburg before the election. Were President Trump and Majority Leader Mitch McConnell the no-holds-barred, win-at-all-costs knife fighters their reputations suggest, they would rush a nominee through before the election. With a 6-to-3 conservative majority on the Supreme Court, the Right could secure power over the levers of government for decades.

But power is not the only thing. Democratic legitimacy matters in America. We are in an election season, and it would be a sloppy rush job to run a whole confirmation process before Nov. 3 while one third of senators are out on the campaign trail. Trump shouldn’t rush anything, but he also shouldn’t shy away from the confirmation battle. There’s no precedent for a president declining to nominate someone to fill a Supreme Court vacancy simply because an election is coming.

Trump should nominate Ginsburg’s replacement. His nominee should be a conservative jurist — which is to say, a jurist who would stick to the letter of the law and the text of the Constitution, and not see him- or herself as a legislator or a culture warrior.

With a nominee before the Senate — not simply a name floated, but an actual nominee pending — the stakes of the 2020 election would be clear. You vote for Trump or a Republican senator if you want this person on the court. You vote for Democrats if you want the alternative.

And for that reason, Trump should demand that Joe Biden say whom he would nominate. We don’t want a long list of possible nominees, but a name.

Then the stakes of the 2020 Senate and presidential elections will be clear. Does the public want a judge who will make law or one who will interpret the law? Are Americans on board with the radical agenda of the left-wing groups, led by Planned Parenthood, that wish to use the courts to advance extremist policies that could never advance through democratic channels, or do they want restraint?

As an added bonus, putting up an actual nominee will flush out the Democrats in an election season.

The Gorsuch nomination, when Democrats came out with generic objections, made it clear that the liberal activist base doesn’t actually care about the specifics; they are simply fighting a blood sport.

The smear campaign against Brett Kavanaugh exposed Democrats’ disdain for due process and honesty.

Were Trump to nominate, say, Amy Coney Barrett, the Left and the Democratic senators wouldn’t be able to control themselves. Democrats and their allies would attack her for having too many children and being too Catholic.

Neither Trump nor McConnell need to commit to what happens in the Senate after the election. The election results will speak for themselves, and duly elected senators will vote their conscience.

But the election isn’t a reason to shy away from the nominate-advise-and-consent process. Instead, Trump should see this vacancy as an opportunity to make it clear what this election is about.