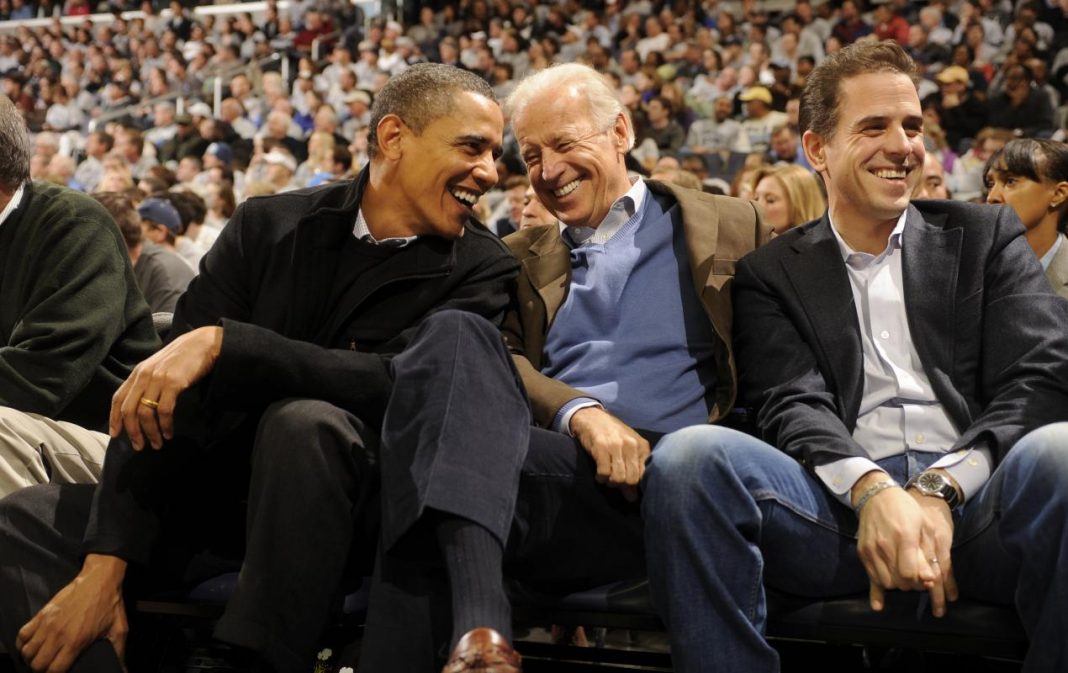 EDITOR’S NOTE (Nick Stamatakis) In the story below by John Solomon many actors we are very familiar with, including the Ambassador to Greece Jeffrey Pyatt and the former Undersecretary of State in Obama administration  Amos Hochstein have testified that they were opposed to the huge conflict of interest in Hunter Biden’s employment by the Ukrainian Gas giant Burisma and his father’s notorious “achievement” to blackmail the country’s authorities in order to stop the investigation against the company….  But at the same time they failed to stop the Biden’s from getting further involved – and they even suggest that there was “widespread agreement” in the Obama administration regarding Joe Biden’s blackmails…. You cannot have it both ways Mrs Pyatt and Hochstein…

Hunter Biden and representatives of Burisma Holdings secured at least six high-level meetings with senior Obama administration officials in the weeks just before Vice President Joe Biden forced the firing of the Ukrainian prosecutor investigating the gas company, according to newly disclosed memos and testimony.

During some of the meetings, a Democratic firm called Blue Star Strategies that was representing Burisma repeatedly pressed U.S. officials to help end corruption allegations that long had dogged the Ukrainian gas firm, which appointed Hunter Biden to its board in 2014.

In one previously undisclosed contact in December 2015, Blue Star secured a meeting with then-U.S. Ambassador to Ukraine Geoffrey Pyatt in which the Burisma lobbyists made a case that the gas firm should not be prosecuted any longer.

The meeting came at a sensitive time. Pyatt just a few months earlier had given a speech demanding that Burisma and its owner Mykola Zlochevsky be prosecuted for corruption, and Ukrainian prosecutors had begun stepping up activity in the case, including sending evidence to the National Anti-Corruption Bureau for further investigation and eventually securing a new asset forfeiture against Zlochevsky.

The New York Times also had just reported a story saying Hunter Biden’s presence on Burisma’s board during the investigation was undercutting U.S. credibility in the fight against Ukrainian corruption. State Department officials divulged Joe Biden also made the first effort to fire the lead prosecutor in the Burisma case that same month.

Amos Hochstein, a senior energy policy official at the State Department and confidant of Vice President Biden, told Senate investigators he took meetings with Blue Star in late 2015 and again in March 2016. He also met once with Hunter Biden during the same time frame to discuss Burisma.

In the latter of its meetings with Hochstein, Blue Star argued there was no longer a reason to pursue the gas firm or its founder Mykola Zolchevsky, Hochstein testified.

“They told me that they believed that Zlochevsky was tried, prosecuted, and the charges against him were dismissed by the U.K. and, therefore, there was no reason to hold him responsible since the judicial system worked,” Hochstein said, describing the March 2016 meeting.

“I was very clear about my views that I disagreed,” he added. “… They clearly did not agree with me, and I expressed my disappointment.”

Hochstein, Pyatt and former Undersecretary of State Catherine Novelli all got pressured by Blue Star and testified they held the U.S. line that Zlochevsky and Burisma should be prosecuted by then-Ukrainian prosecutor Viktor Shokin.

By mid-March 2016, Blue Star had gotten a clear message: The State Department was not budging and planned to let the prosecution of Burisma proceed.

Then in late March 2016, Vice President Biden took an extraordinary step. By his own admission on videotape, Joe Biden threatened to withhold $1 billion in badly needed aid to Ukraine unless then-President Petro Poroshenko fired Shokin.

Ukraine caved, and Shokin was sent packing by the Ukrainian legislature on March 29, 2016.

Shokin has long claimed he was fired at Joe Biden’s insistence because he would not drop the Burisma probe. Joe Biden denies he was trying to help Burisma, and instead pressed for Shokin’s dismissal because the international community wanted a change in the prosecutor’s office.

Shokin had only been in the job about a year when he was canned, and during last year’s impeachment hearings Democrats and their allies in the news media claimed Shokin was fired for corruption.

But State officials testifying before the Senate Finance and Homeland Security committees’ joint investigation of Hunter Biden and Burisma could not corroborate the corruption claims.

George Kent, who was a senior State official in Kiev during the time, repeatedly was asked whether Shokin ever took any bribes, including from Burisma. Kent answered he had no knowledge of such corruption and that Shokin was dimissed after just a year on the job because he was deemed ineffective.

“I can assess that Viktor Shokin did not seriously advance any case of corruption against any known corrupt individual during his tenure,” Kent testified.

Whether Biden forced the firing of Shokin for good or nefarious reasons, the removal of Shokin gave Burisma and its Blue Star lobbyists an extraordinary opening which ultimately benefitted Hunter Biden’s firm.

Shokin’s successor as prosecutor general, Yurii Lutsenko, settled the allegations against Burisma with almost no penalty, pleasing both Blue Star and the gas company.

Kent testified how disappointing the final outcome was.

“What Mr. Lutsenko claimed, and did, was settle the charges against Zlochevsky, downgrade it from money-laundering to nonpayment of taxes, and accept a settlement and a payment that allowed Mr. Zlochevsky to return to Ukraine after that payment was made,” he said.

In other words, the pressure campaign by Burisma ultimately succeeded even though U.S. officials believed Burisma had been corrupt for years and had even paid a $7 million bribe in 2014 to Ukrainian prosecutors under Shokin’s predecessor.

Obama administration officials in their testimony defended Joe Biden’s effort to fire Shokin, saying there was widespread support to do so. But their records also indicate that the vice president veered from the U.S. messaging on Burisma.

During a December 2015 visit to Ukraine, Joe Biden and his staff decided they would not call Zlochevsky corrupt, like Pyatt, Hochstein, Kent and so many others did.

“I’m not going to get into naming names or accusing individuals,” Biden was instructed to say in talking points prepared by his staff.

Whether intentional or not, Joe Biden’s demurral on Zlochevsky and his pressure to fire the Ukrainian prosecutor leading the probe of Burisma ultimately benefited the firm that had hired Hunter Biden and had lobbied so hard through Blue Star to drop the prosecution.