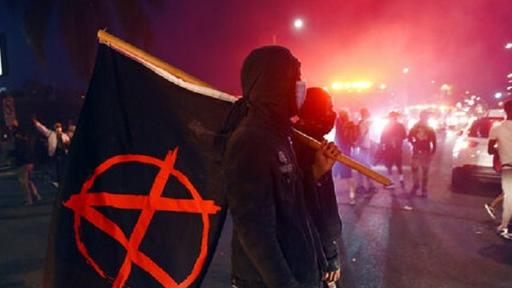 EDITOR’S NOTE (Nick Stamatakis): ANTIFA is not an “idea” as the clueless Democrat candidate Joe Biden stated during the debate… Antifa is a radical left organization with deep historical roots and a “playbook” that goes back decades…

Each week the Greek Police are arresting violent leftist domestic terrorists. Greek patriots are in control of Greece.

On August 19th, Greek police raided the Terra Incognita squat in Thessaloniki. What did they find at the camp? Among the items discovered by police during the raid were various containers containing flammable materials, improvised explosive devices (IEDs), firecrackers taped to gas canisters, a fake ID card, helmets and other protective equipment along with electronic devices, Proto Thema reports.

Investigators also found €1,500 in cash and a book listing financial contributions to the anarchist group. I wonder which Globalist Greek elites and their puppets in Greece funded these thugs?

In May, a plot was foiled by the Greek Police to kill Conservative ex-Minister, Dimitris Stamatis.

During the summer, an investigative independent patriot journalist Stephanos Chios had assassins put two bullets into him, but he survived the kill attempt on his life.

A European Union report in 2018 named Greece as having the highest number of violent ANTIFA attacks out of all European nations. (https://www.europol.europa.eu/activities-services/main-reports/european-union-terrorism-situation-and-trend-report-2018-tesat-2018)

According to the American Mind, they state, “To begin at the beginning: Antifa—real name: Antifaschisitsche Aktion—was born during the street-fights of the 1932 Weimar Republic. It was founded by the Stalinist Communist Party of Germany (KPD), although various Communist “anti-fascist defense” units were associated with the KPD much earlier. Anti-fascist Action’s sole purpose was to help the KPD combat other political parties for control of the streets in the revolutionary politics of the rapidly failing Weimar Republic. And yes, they fought the Nazis. But they also fought liberal parties, conservative parties, and anyone and everyone who got in their way. Antifa would reestablish itself in the early 1980s, also in Germany, out of Autonomism. Autonomism is an anti-authoritarian anarcho-Marxist ideology associated with the Communist urban guerilla organizations of 1970s and ’80s Europe like Red Army Faction and the Red Brigade.” (https://americanmind.org/essays/the-real-history-of-antifa/)

US Attorney General Barr and President Trump label ANTIFA as domestic terrorists along with their ally, Black Lives Matter.

It’s time to declare ANTIFA in Greece as domestic terrorists who are committing treason in Greece. Newt Gingrich dropped clues along with Rudy Giuliani how Black Lives Matter and ANTIFA are funded by George Soros. Anyone funding ANTIFA in Greece must be arrested, including politicians and businessmen.

ANTIFA paved the way for the rise of SYRIZA’s Alexi Tsipras. Tsipras met with George Soros in November 2009 in Athens with Kyriacos Mitsotakis, Stylianos Zavvos (New York Hedge Fund Guy related to Soros) etc. It’s odd how they used the Soros playbook in Greece with Antifa and a police killing of a communist Greek teenager to bring it to the USA to destabilize President Trump. The playbook in Greece overthrew Karamanlis in 2009. Someone lighted Greece on fire in 2007 to destroy Karamanlis. Once Tsipras came in, he opened the borders to the illegal Muslim invasion of Christian Europe in 2015. Soros funded NGOs and his Greek Globalist elites in Greece made money off these illegal Muslims.

Soros perfected his playbook on how to destabilize a nation with ANTIFA or locally funded Globalist NGOs and groups. Soros brought it to the USA to destabilize and destroy America. The aim is to overthrow President Trump using Black Lives Matter and ANTIFA. Greece and Serbia were used as the experiments by the Globalists to subvert a nation within. Cyprus was used on how to steal people’s money in their bank accounts with the bail-ins.

The Greek American Democrat Establishment elites assisted Alexis Tsipras rise to power in Greece when he came to America in 2013. AHI and AHEPA praised Tsipras in 2013. Tsipras met with the Tsakopoulos clan and Philip Angelides(Ex-State Treasurer of California). He spoke at the ‘Deep State’ outfit called Brookings Institute think tank. Anyone who speaks at the institute will be a future leader with the blessing of the Globalists in DC. ANTIFA burned Athens in protests. They ruined people’s property and lives. Alexi Tsipras was President of the Communist Youth Organization in the 1990s. Tsipras’ daddy was a rich man using his PASOK Papandreou connections for crony construction contracts. PASOK and SYRIZA and New Democracy allowed ANTIFA/Leftist Terrorists to operate freely in Greece for years.

The Greek military and patriots took control of security inside Greece to clear out the Globalist puppets ruining Greece. Mitsotakis is on notice and will not be allowed to destroy Greece like Tsipras, Papandreou, Simitis, Old Man ‘Mafioso’ Mitsotakis, etc. The Greek patriots are in control now, just like how American patriots are in control against Globalist elites in the USA.

The Greek American Democrat Establishment elite’s silence on ANTIFA in Greece proves that they go along with the George Soros Globalist agenda.