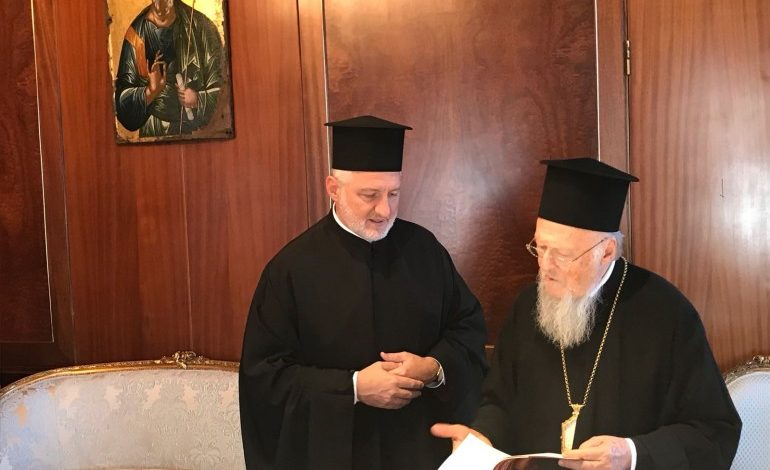 We are used to facing “October surprises” in politics and God knows we had more than our fair share so far this year (with more likely to come…) But for the Greek American community, the big October surprise came from Phanar with the announcement of the suspension of Metropolitan Methodios of Boston until Christmas, the firing (through transfer to Turkey) of Metropolitan Evangelos of New Jersey, and, above all, with the suspension of the Charter of the Church.  The reasons behind the actions taken against the two Metropolitans are more or less known: Friction between them and AB Elpidophoros or the Patriarch had been exacerbating for many months.  More will probably surface soon as emotions have started exploding…

But the focus of our attention should be on the suspension of the Charter, a very significant political and legal event.  To be clear, this is the same Charter that the Patriarchate violated in the process of electing AB Elpidophoros when they emphatically ignored the opinion of the Church of America.  Why are we surprised by a Patriarch who has always treated this Charter as a simple piece of useless paper in order to expedite his goals? This is the same Charter that Pat. Bartholomew changed about two decades ago to upgrade the Bishops into Metropolitans and even earlier to curtail AB Iakovos stature… From the first time Pat. Bartholomew stepped his feet in this beautiful country of ours in 1990, accompanying a real saint, the then Patriarch Demetrios, he showed for all to see his contrarian personality and his self-serving character…  This latest change in the Charter of the Church closes the destructive career of a Patriarch who has accomplished next to nothing in three decades except serving his own ambitions and needs.

As a community, we have been quite unfortunate to be dealing with the “Sultan” Erdogan attacking constantly our ancestral homelands; and equally unfortunate to have to survive the unreasonable character of a “Sultan in a Black Robe”, Pat. Bartholomew… He is supposed to be the leader of the democratic, synodical, Orthodox Church, yet he is yearning to assume absolute powers… Only such a “Sultan” would enact “Charter changes” in such a dictatorial way…  Proving once again that this authoritarian mentality is the main obstacle in the relations between the Constantinople Patriarchate and the Church of America.

What then is accomplished by suspending the Charter at this juncture? If the goal was simply the establishment of a new Charter, this could be discussed and approved without taking the “novel” measure to suspend the old one… In non-profit organizations, it is the supervising administrative/governmental authority, usually the state, which intervenes to suspend the Charter; it normally has to do with violations of state regulations regarding accountability, corruption, or other financial issues.  We do have all of these “problems” in our case and, since GOA is under investigation, the suspension of its Charter by New York State until new transparency rules are established would certainly be welcome news.

But this kind of “self-suspension” of the GOA Charter by the Patriarchate points to other scenarios.  What is gained financially by suspending the Charter? Some legal minds suggest that this may be a “pre-bankruptcy” move.  The recent bankruptcy of the Catholic Diocese of Rockville Centre in Long Island was explicitly done to avoid further sexual abuse lawsuits (because of NY legislation that expires at the end of this year).  GOA has been also hit by many such lawsuits, as Helleniscope and others reported. Along the same lines, this may be an effort for GOA to avoid paying their portion of the priests’ pension plan.

If this is the case then the parishes have certainly the right to stop sending to the Archdiocese their monthly assessment payments until they are informed in detail of the plans to change the Charter and until they are assured that measures of transparency and accountability will be part of the new Charter (A similar idea was proposed today by our friend of concernedorthodoxchristians.blogspot.com). At the least, it should be demanded that the payroll of GOA, all affiliated foundations or groups, and all parishes be made public annually.

Then there is the stated goal of turning the Metropolitans to Bishops in order to strengthen the authority of the Archbishop and his control over the Church. If this is the case (and it looks that much revolves around this scenario), then the faithful should demand not simply their participation in the formation of the New Charter but that the this Charter organize this Church as an American Church: The new Charter should establish the election of hierarchs from within its own people and form its administration according to the laws of the land – autonomous from any foreign and especially “Turkish” – religious institution. It was a welcome sign recently to see that three American-born auxiliary Bishops were elected – although one of them at rather old age; Let them direct, with others, this Church to a new phase…

Helleniscope has expressed the need for the autonomy of our Church on several occasions.  Losing members at the current rate our Church will either shrink or cease to exist altogether.  Without the younger generations, GOA has no future. Our children and grandchildren do not have time and patience for the Phanariot ways and they are absolutely right to demand a Church of “their own”.  In the meantime, some turn elsewhere, mostly to Evangelicals.  Yet many others are actively approaching other Orthodox Churches, exploring all possibilities.