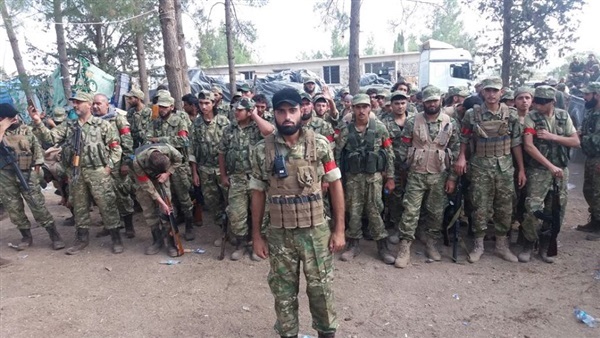 As it has done in other arenas where “extremists” are attacking moderates or Christians—from Syria to Libya to Nigeria—Turkey is spearheading another jihad, this time against Christian Armenia.

Context: Fighting recently erupted in the region of Nagorno-Karabakh, which borders Armenia and Azerbaijan. Although it is ethnically Armenian, after the dissolution of the USSR, the territory was allotted to Muslim Azerbaijan. Since then, hostilities and skirmishes have erupted, though the current one, if not quenched—an Azerbaijani drone was shot down above the Armenian capital and Azerbaijan is threatening to bomb Armenia’s unsecure nuclear power plant—can have serious consequences, including internationally.

By doing what it does best—funding, sponsoring, and transporting terrorists to troubled regions—Turkey has exacerbated if not sparked tensions. Several reports and testimonials, including by an independent French journalist, have confirmed that Turkey is funneling jihadi groups that had been operating in Syria and Libya—including the pro-Muslim Brotherhood Hamza Division, which kept naked, sex slave women in prison—to this latest theater of conflict.

As French president Macron recently explained, “We now have information which indicates that Syrian fighters from jihadist groups have (transited) through Gaziantep (southeastern Turkey) to reach the Nagorno-Karabakh theatre of operations…. It is a very serious new fact, which changes the situation.”

The “quality” of these incoming “freedom fighters”—as the Western mainstream media, particularly during the Obama era, was wont to call them—is further evidenced by their attempts to enforce sharia, Islamic law, on some of their more secularized hosts in Azerbaijan.

After asking, “Why has Turkey returned to the South Caucasus 100 years [after the dissolution of the Ottoman Empire]?” Nikol Pashinyan, Armenia’s prime minister, answered in a statement: “To continue the Armenian Genocide.” This is a reference to the well documented massacre of an estimated 1.5 million Armenians, 750,000 Greeks and 300,000 Assyrians—a total of 2.5 million Christians—slaughtered at the hands of Turks and in the name of jihad.

While Pashinyan is correct in characterizing the latest hostilities as a reflection of Turkey’s attempt “to continue the Armenian Genocide” of the nineteenth-twentieth centuries, in fact, the continuum of Turkic attacks on Armenia stretch back more than a thousand years ago, when the Turks first cleansed the Armenians from their ancient homeland, also in accordance with jihadi ideology.

Then and now, Azerbaijanis participated. During one of the eleventh century jihads on Armenia, the great cross of an ancient church was torn down, mocked and desecrated, and then sent to adorn a mosque in Azerbaijan; more recently, after hostilities erupted, Azerbaijanis surrounded the Armenian embassy in Washington, D.C. this last summer, while chanting about jihad.

For Turkey, however, continuing a genocidal policy is not only a means of implementing Armenophobia, but also a pragmatic task. Armenia and the Armenians of the South Caucasus are the last remaining obstacle on the way of continued Turkish expansion towards the North, the North East, and the East, and the realization of its imperialistic dream.

In other words, he is saying that only Christian Armenia (Georgia would be included too) stands between Turkey and some sort of unification with the many Muslim nations to its east (the “Stans,” e.g., Turkmenistan).

Certainly Turkey’s ambitions are not to be doubted. Whether by citing history’s most sadistic jihadis as paragons of virtue and emulation, or by transforming the Hagia Sophia into a mosque, or by helping to destabilize moderate Muslim governments and slaughter Christians with its jihadi militias, Turkey’s imperialistic dreams of resuccisitating the Ottoman Empire have been increasingly on display.

The editor-in-chief of Yeni Safak, a Turkish newspaper, recently called for as much in an article partially titled “Turkey is a global power. Now it’s time for Azerbaijan to rise.” After saying that Turkey had taken “a century-long hiatus” from its “geopolitical” ambitions and its “region-builder mind that founded very powerful empires on earth,” the Turkish daily claimed that “Our aim is not to spread conflicts but to replace, reinstate what rightfully belongs to us. Our aim is to keep alive and maintain our region, our people, our resources, our identity, and belonging.”

Despite all this and as it was during Obama’s role in the “Arab Spring,” the U.S. finds itself on the side of the jihad, even if unwittingly. “The international community, especially the American society,” Pashinyan warned, “should be aware that U.S.-made F-16s are being used to kill Armenians in this conflict.” Because both the U.S. and Turkey are NATO members, Turkey is acquiring and using against Armenians weapons from the U.S.

And so history continues to repeat itself—in all ways.

Raymond Ibrahim is a Judith Friedman Rosen Fellow at the Middle East Forum.