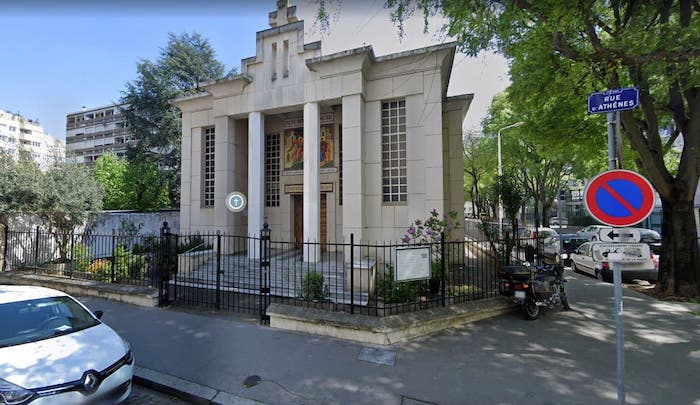 French authorities said that a person suspected of firing a hunting gun and seriously wounding a Greek Orthodox priest outside a church in the city of Lyon, France, Saturday, is in police custody.

Nikolaos Kakavelaki was closing his church when he was shot twice in the chest at point-blank range and is currently in a serious condition in the hospital, police sources said.

The motive for the attack is still unclear, but it comes after a young Tunisian killed three people inside the Notre Dame Basilica in the southern French city of Nice on Thursday and the beheading of a history teacher near Paris earlier last month.

Security throughout France remains high after the deadly stabbings at the basilica, while President Emmanuel Macron tried to ease tensions with Muslims in the country.

French leaders have termed the incident an Islamist terrorist attack after the perpetrator shouted “Allahu Akbar,” Arabic for “God is great,” as he decapitated a woman and killed two other people.

Thursday’s attack followed the beheading of teacher Samuel Paty earlier in October after the republication of cartoons of the Prophet Muhammad by the Paris-based satirical weekly Charlie Hebdo.

Macron triggered protests in the Muslim world after the murder of Paty, who showed a cartoon of Muhammad to his class, by saying France would never renounce its right to caricature.

On Saturday, though, Macron sounded a more empathetic tone in an interview with Arab broadcaster Al-Jazeera.

“I can understand that people could be shocked by the caricatures, but I will never accept that violence can be justified,” Macron said.

Meanwhile, French authorities detained a third man for questioning Saturday in connection with the Islamist knife attack at the basilica in Nice.

The man was present during a police search Friday at the home of a second young Tunisian man suspected of being in contact with the attacker.

The main suspect, Ibrahim Issaoui, 21, who went through Italy last month en route to France, remains in critical condition in a French hospital after being wounded by police as they arrested him.

France, Tunisia and Italy are jointly investigating to determine the motive for his attack, whether he acted alone and whether his act was premeditated.

Issaoui was not on Tunisia’s list of suspected militants and was not known to French intelligence services.

Tunisian authorities are reportedly investigating whether a group called the Mahdi Organization carried out the Nice attack. The state news agency TAP reported Friday investigators were also trying to determine whether the group exists and said that the probe is based on claims of responsibility on social media.

The French Interior Ministry has described in an alert on Twitter an “ongoing situation” in the Place Jean-Macé area in the 7th arrondissement of Lyon. Security forces have been deployed at the scene, it said. The public has been told to avoid the area and follow instructions from the authorities.

The priest was attacked when he was closing the church, at around 4pm local time, police sources told Reuters and BFMTV. He suffered two gunshot wounds, which were described as “life-threatening,” and was receiving treatment on site. Le Parisien has reported the shooter was armed with a sawn-off hunting rifle.