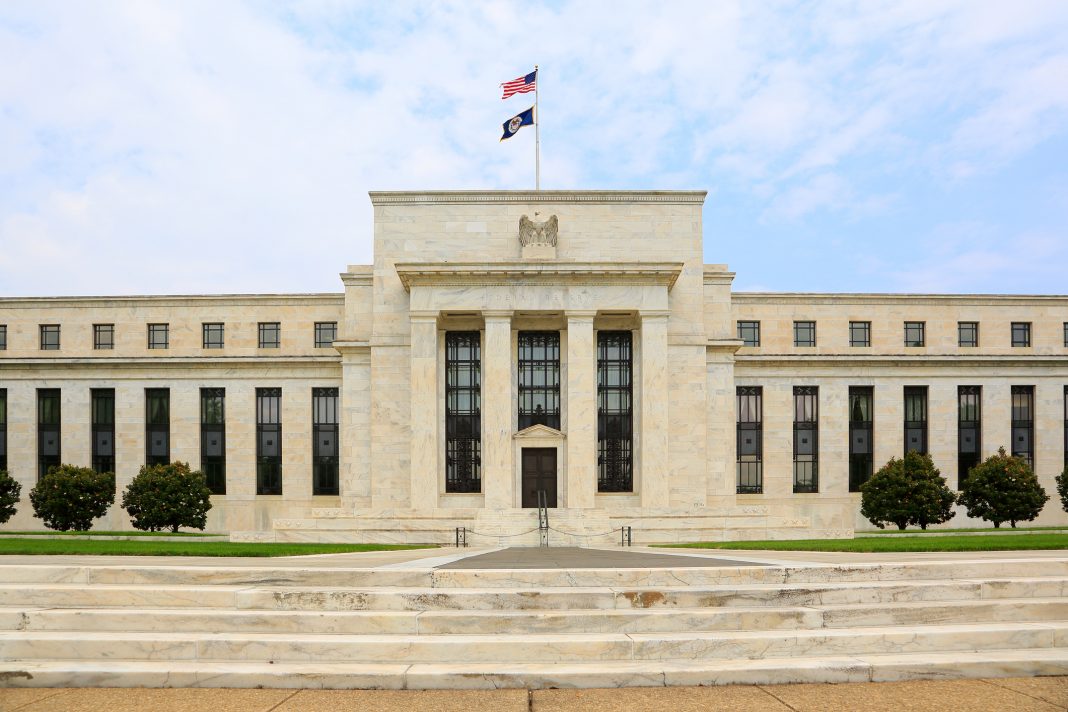 EDITOR’S NOTE (Nick Stamatakis): All of us supporting President Trump can easily list his many accomplishments from the economy to the judiciary, to supporting the minorities with many practical programs (and not handouts) and to establishing peace in the Middle East and beyond. But there is one accomplishment which stands above all the rest and has to do with achieving control of the Federal Reserve. This was a long process but was finalized late last year as explained in the article below.

The practical effects of this are enormous.  I will only mention one example: Among the post-pandemic financial measures the “Main Street Lending Program” was established to lend money to medium and large size businesses directly from the Federal Reserve (meaning the Banks end up with only 5% of the risk)… This was in addition to EIDL business lending program by SBA (with interest rates of 3.75%)… These programs were preceded by other SBA lending in 2018 particularly for black entrepreneurship which led to a boom of black business ownership in the same year…

Taking control of the Federal Reserve itself is an accomplishment which reminds us of the famous act by JFK on June 4, 1963: by signing Executive Order 11,110 which called for the issuance of $4,292,893,815 (4.3 trillion) in United States Notes through the U.S. treasury rather than the traditional Federal Reserve System. That same day, Kennedy signed a bill changing the backing of one and two-dollar bills from silver to gold, adding strength to the weakened U.S. currency.

I am not going to enter here in an analysis of the various conspiracy theories linking JFK’s assassination to this act.  But we cannot miss the historic dimensions of President Trump’s taking control of the Fed which is likely to positively affect our economy and our personal lives for a very long time… As long as we re-elect him and we keep electing presidents who are not puppets of the global financial oligarchy.

PUBLISHED ON NOVEMBER 25TH, 2019 BY PINNACLEDIGEST.COM

With less than 12 months until the 2020 U.S. Presidential Election, President Trump is harnessing the power of the Fed to ensure his victory. Despite Trump’s past Twitter attacks on Fed Chairman Powell, the two finally appear to be dancing to the same song—the Fed is back buying Treasury bills to the tune of $60 billion per month.

The Federal Reserve is by far the world’s most powerful financial institution. And it is now acting as an extension of the White House.

Despite a weakening economy from a GDP standpoint (1.9% in Q3) and a declining manufacturing sector, the Fed is reigniting the risk-on trade. For the first time in years, its balance sheet is rising at an alarming rate as it floods the system with liquidity.

Fed Unites with Trump as Balance Sheet Balloons to Shore Up U.S. Economy

Total Assets of the Federal Reserve I Balance Sheet (Trillions)

$60 billion in quantitative easing per month is massive. Today, the Fed’s balance sheet is expanding as fast as it did back in 2013-2014. At this pace, it may surpass its all-time high of $4.5 trillion by June 2020. Below is a ten-year chart for some context.

In a recent MarketWatch article, Ivan Martchev clarifies what repurchase agreements mean and why the Fed’s newest round of QE can have such a powerful effect on the markets and economy:

“Balance-sheet expansion is like printing money — but for financial institutions only. It does affect the monetary base (excess reserves plus currency in circulation), which is the narrowest definition of money supply (M0). It basically causes asset-price inflation without causing uncontrolled broad money supply growth, which is why [sic] it has not (yet) resulted in hyperinflation.”

The age-old adage “don’t bet against the Fed” is holding true. As we embark upon the eleventh year of this bull market, the longest in U.S. history, the resilience of short-sellers has been tested like never before.

ZeroHedge highlights the pain short-sellers have endured recently in an article titled Going Down Swinging: “World’s Most Bearish Hedge Fund” Loses 75% Of Its Assets After Worst Year On Record. The Horseman Global Fund is under severe pressure as the Fed continues to inject liquidity; the funds’ assets under management have declined from $581 million at the start of the year to just $150 million today—a loss of 75%, according to data compiled by ZeroHedge and Citco Fund Services.

Those who have bet against the Fed or Trump have been burned.

Trump’s All-in Bet on the Economy is Winning

“Moments ago, the Fed announced that in a previously unannounced meeting that was not on the official White House calendar, Fed Chair Powell met with Trump and Mnuchin at the White House “to discuss the economy, growth, employment and inflation”, marking the second face-to-face meeting between the world’s two most powerful people amid Trump’s relentless criticism of the central bank.”

Furthermore, in a sign that Powell is cozying up to Trump,

“During his Congressional testimony last week, Powell called the U.S. economy a “star” performer and voiced solid confidence that its record expansion will stay on track even as, paradoxically, the Fed recently cut rates three times in the past four months and in October launched NOT QE (spoiler alert: it is QE) to purchase T-Bills in a move which Bank of America described is QE in all but name.”

Rarely does a Fed Chair tout the economy while slashing rates.

Jim Rickards Explains How Trump Took Over the Fed

American lawyer, financial commentator, and best-selling author Jim Rickards dubbed Donald Trump a genius in late October 2019. According to an interview with Rickards, Trump’s genius is in large part due to the fact that he “owns” the Fed:

Well, Obama was so sure that Hillary was going to win that he didn’t bother with the appointments. He said, well, I’ll give them to Hillary. She’ll appoint some strong hands. So, Trump got two seats right off the bat, then there were a couple of resignations, so there kind of went up to four seats, and then one more since then. Plus promoting J. Powell from a governor, where he already was a governor before Trump, to Chairman.

So, Lael Brainard is going to end up as the only non-Trump appointee on the Board of Governors of the Federal Reserve. She must feel like a hostage when she goes into the room.

You can watch the full interview here: James Rickards: “Donald Trump is a Genius”

We will reserve judgment on the “genius” title for now…

Many people read Trump’s bombastic and sometimes ridiculous tweets and think Powell and the Fed must hate his guts. They don’t realize he hand-selected almost the entire Board of Governors. Despite claims otherwise, the Fed has always been political; we are witnessing this truth today, just as we did during the Obama years.

Trump’s Power Grows Beyond the Fed

While the media stays glued to Trump’s latest tweets and the ongoing impeachment proceedings, Trump is appointing what could become a record number of judges to America’s courts.

“We are going to be, I think, just about No. 1 by the time we finish — No. 1 of any president, any administration,” President Trump said.

In the same article, Brian Fallon, the head of progressive group Demand Justice, was quoted,

“Democrats have been caught napping on the courts for a while now, and we are going to pay the price for years to come.”

“Trump is way ahead of everyone on appeals court judges ― the people who have the final say in nearly all federal appeals cases around the country.”

“…nearly 1 in every 4 seats on U.S. appeals courts is now filled by a judge appointed by Trump.”

While the numbers above have already grown, they are poised to grow even more substantially.

“So far, the Trump has appointed nearly 160 federal judges to lifetime seats to district and appeals court seats.”

“The administration is currently racing to surpass 180 judicial appointments in the next couple of months, a goal Trump recently announced.”

In a final comparison, Trump has already tied Obama by appointing two judges to the Supreme Court: Neil M. Gorsuch and Brett Kavanaugh. The importance of the U.S. Supreme Court is immeasurable. In July 2019, the U.S. Supreme Court approved $2.5 billion via military funding for construction of a wall on the southern border after a 5-4 ruling in Trump’s favor. Not coincidentally, there are 5 Republican appointed Supreme Court Justices and 4 Democrat appointees.

If Trump wins in 2020, it could mean two more conservative Supreme Court Justices. Two of the nine Supreme Court Justices with a more liberal-leaning track record are Ruth Bader Ginsburg, 86, and Stephen Breyer, 81. Both have served as associate justices since the mid-90s and will be unlikely to serve until the end of Trump’s potential second term in 2024.

Trump is positioning himself to make significant moves in his second term—if he can get re-elected. After all, Trump-appointed governors are already running the Federal Reserve, and his influence is growing within the U.S. justice system.

All the best with your investments,