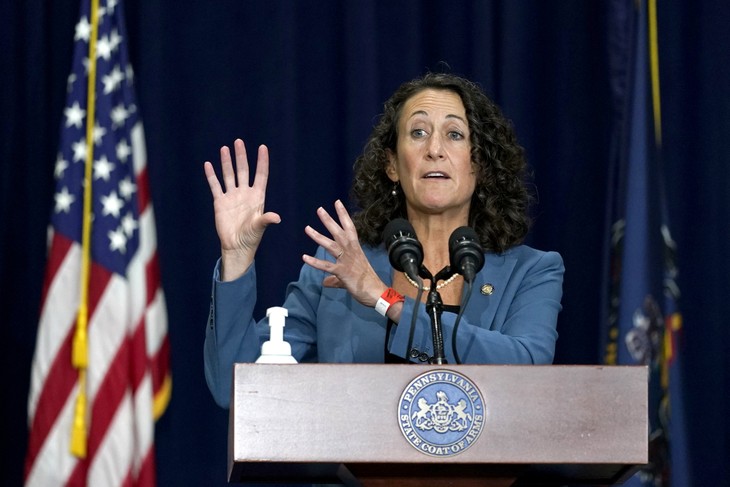 EDITOR’S NOTE: I will summarize below the ten reasons in the massive republican lawsuit but you can read the details in the report that follows. Meanwhile, the US Supreme Court is expected to take the biggest of all claims, having to do with the unconstitutional action of the democrats in PA: When the State Legislature rejected their last-minute changes they wen to the PA Supreme Court and asked their “buddies” to change the Law and they did (!!) – a completely unconstitutional decision which will be likely demolished by the US Supreme Court. In other developments Republican AGs to SCOTUS: Overturn Illegal Pennsylvania Ballot Extension…

10. Depriving poll-watchers of their right to observe the count

THE WHOLE ISSUE WAS EXPLAINED BY MITH MC CONNELL IN A SUPERB WAY:

ON FIRE: McConnell Will Brook ‘No Lectures’ From Dems Who ‘Spent Four Years’ Rejecting the 2016 Election

On Monday, the campaign to reelect President Donald Trump filed a mammoth lawsuit accusing Pennsylvania Secretary of the Commonwealth Kathy Boockvar and county elections boards throughout the state of violating the U.S. Constitution by unilaterally revising the law in a manner that deprives some voters of their rights to a free and fair election.

“In a rush to count mail ballots and ensure Democrat Joe Biden is elected, Pennsylvania has created an illegal two-tiered voting system for the 2020 General Election, devaluing in-person votes,” the lawsuit alleges.

“For voters that appeared at the polls, those citizens were required to sign voter registrations, have those signatures checked against voter rolls, vote in a polling place monitored by statutorily-authorized poll observers, and have their votes counted in a transparent and verifiable open and observed manner. By contrast, due to the arbitrary, unauthorized, and standardless actions of the Secretary of the Commonwealth of Pennsylvania, Kathy Boockvar, nearly 2.65 million votes were cast through a ‘mail-in’ process that lacked all of the hallmarks of transparency and verifiability that were present for in-person voters,” the suit claims.

The Trump campaign and two Pennsylvania voters allege that Boockvar “refused to require adequate verification of the voter’s identity. Rather than require votes to be received on the day of election, the Secretary permitted ballots received up to three days after the election to be counted without any evidence of timely mailing, such as a postmark. Finally, contrary to the in-person voting that is open and transparent to the parties and the candidates, Defendants permitted the review and counting of mail-in ballots largely in secret with no monitoring.”

“This two-track election system not only violates Plaintiffs’ rights guaranteed by the United States Constitution but also violates the structure of the Constitution that elections in the States must be carried out as directed by their respective legislatures,” the lawsuit claims.

The lawsuit seeks an emergency order preventing Pennsylvania from certifying the election results or one prohibiting the election officials from certifying any results “that include the tabulation of absentee and mail-in ballots which do not comply with the Election Code,” such as ballots counted while the Trump campaign’s watchers were prevented from observing or ballots that lack requirements of state law such as a secrecy envelope or a voter’s signed declaration. The lawsuit also seeks an injunction ordering election officials not to count ballots in cases where election officials contacted voters to give them an opportunity to “cure” improperly cast ballots.

This extraordinary legal action only makes sense given the numerous significant concerns the Trump campaign raises throughout the lawsuit. Boockvar and county election officials allegedly engaged in egregious discrimination and gave wanton preference to voters in Democratic-leaning counties over those in Republican-leaning counties.

Here are ten of the serious concerns the lawsuit highlights.

Boockvar and the county officials repeatedly ignored essential safeguards for absentee and mail-in voting which require “procedural safeguards to deter fraud and ensure transparency” due to “inherent risk.” In December 2019, Pennsylvania’s auditor general, Eugene DePasquale, determined that there are more than 50,000 cases of potentially inaccurate voter records in the state’s system.

On October 31, 2019, Pennsylvania’s legislature passed Act 77, which allowed all Pennsylvania voters the option of voting by mail without providing a reason or excuse. Yet mail-in voting still requires a ballot application and the election code still bars ballot harvesting except in the case of disabled voters. Pennsylvania law still requires ballots that have been filled out incompletely or incorrectly to be declared void and it does not permit election boards to give voters who cast improper ballots a “notice and opportunity to cure” those ballots.

“Defendants failed to take adequate measures to ensure that the provisions of the Election Code enacted to protect the validity of absentee or mail-in ballots, including without limitation Act 77, were followed,” the lawsuit alleges.

On August 19, 2020, Secretary Boockvar sent all the 67 county election boards a guidance document claiming that the “naked ballots should be counted pursuant to the Pennsylvania Election Code.” (A ballot is considered “naked” if it is not returned in the secrecy envelope, as required by state law.)

On September 17, the Pennsylvania Supreme Court rejected that position, but Boockvar did not send a follow-up guidance telling the election boards that they must not count naked mail-in ballots.

The lawsuit claims the September 11 guidance forbade signature verification in vetting mail-in ballots and ballot applications. It also cites a September 28 guidance memo, in which Boockvar claimed that the “Election Code does not permit county election officials to reject applications or voted ballots based solely on signature analysis.”

“Despite the fact that well over a third of the votes were cast by mail, Secretary Boockvar and the Pennsylvania Department of State did not undertake any meaningful effort to prevent the casting of illegal or unreliable absentee or mail-in ballots and/or to ensure the application of uniform standards across the County Election Boards to prevent the casting of such illegal or unreliable ballots. Rather, Secretary Boockvar has exercised every opportunity to do quite the opposite,” the lawsuit claims.

Officials in Luzerne County found that a temporary seasonal election worker trashed nine military ballots received in unmarked envelopes, seven of which had been cast for President Trump.

During the election, voters reported receiving mail-in ballots even though they did not apply for them. Many reported having received multiple mail-in ballots, some as many as four or five.

“Moreover, at the polling locations on Election Day, voters were informed that they must vote provisionally because they had applied for mail-in votes, even though those voters report that they neither applied for nor received mail-in ballots,” the lawsuit notes.

Some voters reported having received unsolicited mail-in ballots, but when they went to their in-person polling places, the poll books reflected that no mail-in ballot had been sent.

On the other hand, even though poll workers told voters that they were recorded as having already voted by mail, the workers let the voters cast ballots in person to be recorded on ballot machines.

Poll watchers reportedly observed poll workers mishandling spoiled mail-in or absentee ballots that should have been voided after the voters returned them in order to vote in-person instead.

In Allegheny County, voters reported that poll workers watched voters cast provisional ballots in such a way that the poll worker could determine which candidate the voter had selected.

In Centre County, a poll worker reported that people who identified themselves as New Jersey voters — rather than Pennsylvania voters — were allowed to cast provisional ballots in person.

In Chester County, an observer claimed to have witnessed an election worker alter the results of unclear ballots. The worker dealt with over-voted and under-voted ballots — ballots that marked either zero candidates or multiple candidates for one or more offices. “The observer reports that in numerous instances the election worker altered the over-voted ballot by changing votes that had been marked for Donald J. Trump to another candidate.”

The lawsuit claims that “dozens of mail-in ballots were addressed to single addresses, each ballot being in a different name. Based on the carrier’s experience delivering mail to those addresses, the carrier is aware that the people whose names were on the ballots are not names of people who live at those addresses. In addition, ballots were mailed to vacant homes, vacation homes, empty lots, and to addresses that do not exist.”

Although local officials and celebrities engaged in media campaigns to encourage voters to send in their ballots in the secrecy envelope, some Pennsylvania counties reached out to voters after they had cast naked ballots.

Philadelphia County reportedly sent a “notification” to voters who had cast inadequate ballots, urging them to “cure” the ballots. “To figure out which voters should be notified, Philadelphia County had to inspect the mail-in ballots before election day—in plain violation of state law,” the lawsuit alleges.

Other counties — such as Lancaster, York, Westmoreland, and Berks Counties — “did not contact voters who submitted defective ballots or give them an opportunity to cure. They simply followed the law and treated these ballots as invalid and refused to count them.”

“Because the counties that followed state law and did not provide a cure process are heavily Republican (and counties that violated state law and did provide a cure process are heavily Democratic), Defendants’ conduct harmed the Trump Campaign. It deprived the President of lawful votes and awarded his opponent with unlawful votes.”

10. Depriving poll-watchers of their right to observe the count

The lawsuit cites many examples in which election officials prevented poll-watchers from observing the counting of votes, as required by state law.

The lawsuit claims that Trump campaign observers were denied access altogether in some instances in Philadelphia County. The county’s elections board did not permit the Trump campaign’s observers to be within 6 feet of “all aspects” of the pre-canvassing process in violation of Commonwealth Court Judge Christine Fizzano Cannon’s November 5, 2020, order requiring that poll-watchers “be permitted to observe all aspects of the canvassing process within 6 feet.”

“It is estimated that 680,770 ballots were processed by the Allegheny and Philadelphia County Boards of Elections when no observation was allowed,” the lawsuit alleges.

The lawsuit brings no fewer than seven counts against Boockvar and the county election officials, claiming that they violated the Fourteenth Amendment to the Constitution and the Electors and Elections Clauses of Article I in the Constitution. In broad strokes, the lawsuit accuses the defendants of unilaterally making law on elections, depriving the legislature of its rights, and of denying voters and the Trump campaign equal protection under the law.

According to Decision Desk HQ, Democratic nominee Joe Biden leads Trump by just over 45,000 votes in Pennsylvania. Most news outlets hailed Biden as the president-elect after calling Pennsylvania for the Democrat.

Given the ten serious concerns the Trump campaign raises in this lawsuit, media outlets should reconsider calling the race for Biden in Pennsylvania.

While it makes sense that Americans want a definitive answer on the 2020 election as soon as possible, the Trump campaign has indeed highlighted serious concerns about the integrity of the election in Pennsylvania and in many other states. These concerns need to be addressed and litigated. Even if Biden still wins at the end of that process, the process is necessary to safeguard the integrity of the election.