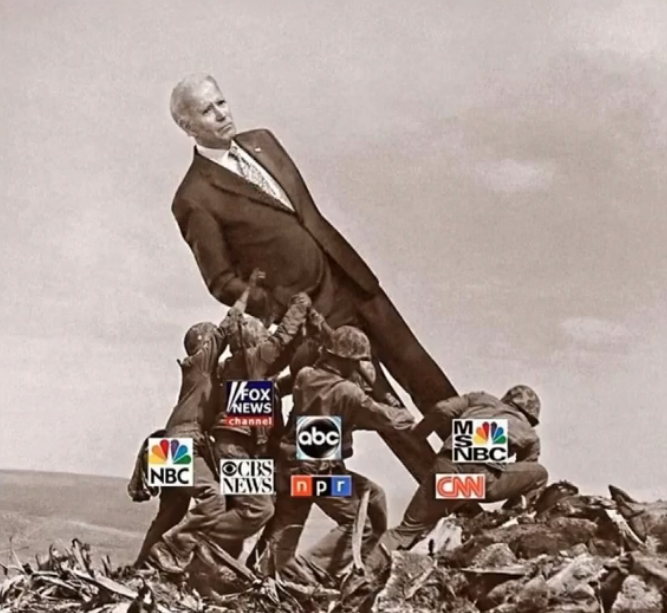 EDITOR’S NOTE: Helleniscope disagrees with one point of the article below, regarding conspiratorial theories about 9/11… However we think that this article contains so main valid points that it was worth posting here.

by the Saker (source: thesaker.is)

I need to begin with the obvious: in spite of all the deep state, propaganda and “deep empire” (transnational) resources being used to declare that “Biden” (i.e. Harris) has won, as of right now nobody knows who got most votes and where.

I would even suggest that we will never really find out who won, because who won depends on a large number of local laws and regulations and because it will probably never be possible to separate the fake votes from the legal ones.

Finally, neither side will ever gracefully admit to having lost the contest. So now the country will enter a profound crisis.

That is the bad news.

But there is also very good news.

First, it has now become clear to the entire planet that the US “democracy” is anything but: the US is an oligarchic plutocracy, plagued with a myriad of antiquated laws and corrupt to the bone. The special “trick” of this US oligarchic plutocracy is that is masquerades as an ochlocracy: there is pretend mob rule which serves as the microscopically small fig leaf hiding the real nature of the regime. Second, while the Dems did their best to hide this, and they still are, it is now becoming evident that the sheer magnitude of the fraud made it impossible to conceal it. Now if we think of how the AngloZionist Empire has handled equally non-believable nonsense (9/11, Syrian gas attacks, Skripal, Navalnii, etc.) we know what they are going to do next: double down, which will reassure the brainwashed zombies, but will even further infuriate those still capable of critical thought.

Third, the behavior of the US media in this entire operation is so obviously disgraceful that nobody will ever take them seriously again (at least amongst the thinking people, the zombies glued to the Idiot Tube are beyond any rational arguments anyway). This is particularly important in regards to FoxNews who has shown that it was a pseudo-conservative propaganda outlet which, in reality, is completely committed to the political agenda of Rupert Murdoch and his family.

At this point in time, it is impossible to predict what will happen next, but the murder of JFK or the 9/11 false flag strongly suggest that the US deep state will win. There seems to only be one way for Trump to stay in power and it will probably look similar to this:

Giuliani, who I was told won over 4,000 lawsuits in his career, is a very tough guy (look at what he did to the mob in NY!) and he must realize that the lawsuits he will file this week will be the most important ones in his career. They will even probably define his legacy. The notion that he would go to the courts with no solid evidence in his files is simply ridiculous. I don’t see any mechanism which can stop Giuliani now, so the ball will now go to the state and federal courts next and, after that, to the Supreme Court. There the situation is hard to predict.

In theory, Trump probably has enough conservative Justices, especially with Ruth Bader Ginsburg gone and Amy Coney Barrett replacing her. That’s only in theory. In reality, things are much more complex. On one hand, the pressure of the deep state on the Justices will be immense, but on the other hand, once you are a SC Justice you cannot be attacked, at least not legally. Amy Coney Barrett will also face immense pressure to “prove” her “independence” (meaning, if she sides with Giuliani’s side she will be called a Trump shill and even much worse than that!). One thing is certain, any Justice siding with Giuliani will face immense pressures followed by a vicious denigration campaign. Who knows how many Justices would have the courage to face this?

However, there is also the possibility that any Justice siding with Giuliani’s conclusions will go down in history as yet another “profile in courage”, so I would not completely discard that possibility either.

During my student years in the US I had the chance to meet, and study with, such US officials as Paul Nitze or Admiral Zumwalt and I was always amazed at how candid former US officials were, but only once they retired. USSC Justices are not retired, of course, but, like retired officials, they are beyond the reach of any legal reprisals, and that might strengthen their willingness to honestly follow their conscience and speak their minds.

Giuliani will certainly fight hard, but looking at the political correlation of forces I can’t see an outcome where Trump would successfully defeat a much stronger opponent. Think about it, the only possible ally for the Trump campaign would be the Supreme Court: the GOP, Congress, the Deep State, the legacy ziomedia, and even members of the Trump Administration (think Bolton or Esper here) all hate him with a passion. And now that Trump appears to be losing, they are not shy about it.

Still, as the proverb says, we need to hope for the best but prepare for the worst.

That is, obviously, a Harris Administration in control of the Executive.

So what can we expect from these folks?

First and foremost, a sustained campaign to completely negate the First and Second Amendments to the Constitution. Considering how truly sacred these two cornerstones of the US Constitution are for millions of US Americans, we can expect a lot of resistance from the “deplorables”, both legal and violent.

Second, the control of both the Executive and all the major IT giants will mean that free speech will be driven even further underground. This new reality will require a lot of thinking in the development of a strategy to protect the voices which the regime in DC will now openly try to silence.

Possibly the dumbest mistake made by Trump was not to create his own TV channel. He had the money, he could have found allies, but he simply lacked the intelligence to see the danger. Instead, this narcissistic fool thought that Twitter was the way to bypass the legacy media. Is there a possibility that if he is thrown out of the White House we might finally understand that what the US now so urgently needs is, at the very least, a free TV channel and at least one free social media option? Maybe, but I am not holding my breath, Trump always had this ability to disappoint…

Third, on the international front, we can expect even more hysterical Russia bashing (the Dems all hate Russia with a passion, especially since they have brainwashed themselves for four years that “Putin” had “attacked” the US elections). But there is really nothing the US can do to Russia, it is way too late for that. So I would expect even more hot air than from the Trump Administration, and probably not much more action, although that is by no means certain, since a braindead nominal President like Biden would not have Trump’s intelligence to understand that a war against Russia, China or Iran would end in a disaster: Dems always start wars to try to convince the public that they are “tough” (Dukakis in his M-1 tank). Now that they not only appears as weak, but also illegitimate and even senile (did you see Biden trying to run to the podium?), they will have to prove their “virility” and send some cruise missiles flying somewhere (that kind of attack is what these cowards always use first).

As I mentioned in the past, the outcome of this election will not have much of an impact on US foreign policy: first, the US elites more or less all agree on continuing a policy of violent imperialism; but even more crucial is the fact that the Empire is as dead as the Titanic was when it hit the iceberg: not all passengers realized what was taking place, but that did not affect the outcome in the least.

Furthermore, as those familiar with Hegelian dialectics know, each action eventually results in a reaction and the notion that 70,000,000+ voters will simply accept what is self-evidently a coup against not only Trump, but also the US Constitution itself, is ridiculous. If anything, these people will now come to realize that while the US is facing no real foreign threats at all (except those it created itself), there is most definitely an internal threat, in the sense of the United States Uniformed Services Oath of Office, and that this reality gives them the right, and even duty, to “resist tyranny”.

You have probably heard Joe Biden declaring that he wants to heal the wounds, restore unity, rule for all US Americans and the like. I don’t think that this is only empty political rhetoric, though that is part of it too. Mostly, I believe that the Dems are terrified because they know for a fact that they stole the election and this is why after four years of the most divisive and irresponsible rhetoric against Trump, “the racist system” and all the rest of the crap, they are now making a 180 (they are experts at that!) and pleading for calm, peace and unity.

That ain’t going to happen.

Finally, a word to those who like to say that there is no difference between the Dems and the GOP, that this is all a fake conflict: friends, you are both right and massively wrong. You are right when you say that the DNC and the RNC are like indistinguishable twins. But what you are missing are two crucial things:

Conclusion: not the RNC vs the DNC but the Deep State vs the Deep Country

A quick look at a map tells the story: this struggle is most one of the deep state vs the deep (real) country. Yeah, I know, Trump is hardly a miner from West Virginia or a farmer in Alabama. But that doesn’t matter one bit. What does matter is that the deplorables from the “overfly country” felt that Trump speaks for them and that he is all that stands between them and the (pseudo-) Liberals of CNN, the Antifa/BLM thugs and the destruction of the United States as we all knew them. And yes, this is a simplistic view, but it is fundamentally correct one nonetheless.