On the eve of Mike Pompeo’s visit to Constantinople to visit Pat. Bartholomew a massive attack is underway by the Turkish Press against the Patriarchate in the form of presenting evidence of the involvement by Karloutsos, the “hidden archbishop” of GOA, to the Fethullah Gulen movement – and furthermore to the 2016 coup against Erdogan.  Specifically, several Turkish media presented the story of the cooperation between Karloutsos and Gulen and their involvement in the coup. It is an apparent attempt by the Erdogan circles to remind everyone that there is a “reason” behind their rejection of the Patriarch – and this reason has a name: Karloutsos…  The Turks consider Karloutsos an American intelligence operative and they probably have issued a block to his visiting Turkey…

The basic evidence thrown to the public is an email involving Karloutsos, the Archons and a Gulen representative… Here is a translation of what newspaper Aydinilik wrote in a FRONTPAGE story: 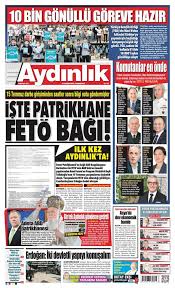 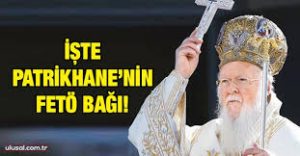 Here is the Patriarchate FETO Bond!

The correspondence between the US Archbishop of the Fener Patriarchate and the Program Director of the Rumi Forum, one of the most important structures of FETÖ in the USA, emerged.

Aydınlık Newspaper is one of the most reliable representatives of Raşit Telbisoğlu, who was the Program Director of the Washington-based Rumi Forum during the July 15 coup attempt, one of the most important structures of FETÖ in the United States, and one of the influential figures of the American Archbishop of Fener Patriarchate and Patriarch Bartholomeos. He revealed his correspondence with Father Alexander Karloutsos.

Here is that “information note”: 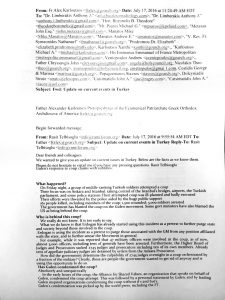 Subject: Information about the recent events in Turkey

We want to inform you about the recent events in Turkey. Below we have listed the facts we know for you. If you have a question you are curious about the answer, do not hesitate to send an e-mail. Raşit Telbisoğlu

The text of Gülen’s responses to the allegations of the coup:

On Friday night, a group of middle-ranking Turkish soldiers attempted a coup.

Their targets were Ankara and Istanbul, and they were to capture Istanbul’s bridges, airports, the Turkish Parliament and some police stations. Coup attempts were very unplanned and did not function properly. The initiative was repulsed by the police and with strong public support. 161 people were killed, 1,500 injured, and 3,000 soldiers arrested, including the putschists. The government blamed the Gülen movement for the coup. Some ministers also accused the US of being behind this coup.

Who is behind this blow?

We really don’t know that either. It’s too early to say anything.

All we know is that Erdogan has already begun to use this coup as an excuse in the state and society to weed out people who did not get involved in the coup.

Erdogan uses this incident as an excuse to further smear the Gülen movement at all levels of the state and in general.

For example, although a total of 47 officers reportedly involved in the coup are known, almost 3000 officers, including dozens of generals, have been arrested so far. Furthermore, the High Council of Judges and Prosecutors liquidated a total of 2745 judges and prosecutors, including dozens of members. Dozens of Appeal Court judges have already been arrested on an order issued by the Ankara Chief Prosecutor.

How was the government able to determine the crimes of 2745 judges after the coup that was arranged by a small part of the army overnight? It is clear that these individuals are already the people the government wants to liquidate, and they are trying to seize this opportunity.

Did Gülen condemn the coup?

Gülen’s condemnation message was featured in the world press, including the Financial Times (FT).

So why did Erdogan deal the coup on Gülen?

The Gülen and Hizmet movement is Erdogan’s “usual scapegoat”. Whenever a situation he deems inappropriate occurs, he puts the blame on Gülen.

From the condemnation letter sent by 75 US Senators on the corruption investigations, to much more absurd reasons. Gülen becomes an excuse he finds to weed out all those in the government and society who do not offer their full loyalty.

It is much easier to put this on Gülen, because now society has begun to accept this excuse.

In addition, claiming that Gülen is structured in every institution and holding Gülen responsible for this military uprising also allows Erdogan to intervene by claiming that they are linked to other institutions.

So did the Turkish nation stand up against the soldiers and defend Erdogan? I thought they hated this guy?

Erdogan’s support from Turkish voters was between 40-50 percent before this coup. So there was majority support already. Even those who fiercely criticized Erdoğan and the government condemned this coup and supported the government. According to the coup experts, a very important point was that the coup plotters failed to portray this coup as if it would be successful.

There is no support for military martial law in the Turkish nation.

Why had people opposed Erdogan before? What has he done to make people so dissatisfied?

Erdogan came with a very innovative government in his first and second term.

But after 2010, it became increasingly authoritarian, pursuing increasingly populist Islamist policies. The Gezi Park protests in the summer of 2013, which Erdogan described as the coup d’etat of the “interest lobby”, which he used as the implicit version of the Jewish lobby, was a reaction against this authoritarianism. This authoritarianism gained further momentum with a series of corruption investigations that exposed Erdogan’s internal team and continued in December 2013 and beyond. In order to cover up concrete evidence and legal investigations, Erdogan fought back to gain control of the law, the press and civil society, and set up his own cadres and defeat any opposition. Many people were also disturbed by the authoritarian regime as a result.

Erdogan has already won. After this time, any meaningful opposition to the witch hunt he will initiate against opposition groups is not possible. Until now, the General Staff has resisted Erdogan’s efforts to redesign the army. The General Staff has now also given up. Erdogan’s next step will be directed at Turks abroad, as he ensures full loyalty to Turkish state institutions and civil society. We were already receiving coordinated attacks against the Hizmet movement abroad, and it looks like this will continue for a while. For the last 6 years, Erdogan has started to establish formal and informal structures to mobilize Turkish-speaking and expanding Muslim communities.