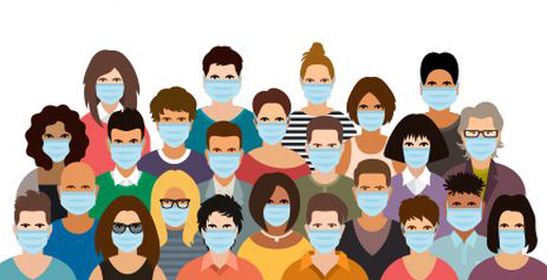 EDITOR’S NOTE (Nick Stamatakis): For those interested in science this is the most truly scientific study on the use of mask, complete with huge numbers of subjects under study (over 6,000) and all the rest of the scientific controls.  But do not expect to see it published anywhere… Why? Because all of our so-call scientific journals are under tremendous political pressure… Take a look at this title of today’s NY Times to see for yourself how idiotic journalism in this country has become: “A New Study Questions Whether Masks Protect Wearers. You Need to Wear Them Anyway”… Are you kidding me? The NY Times agrees that the study is scientific and its results true but we need to wear them anyway?  Absolutely pitiful state of affairs for the former “newspaper of record”…
=============================================
A major Danish study has found face masks give no clear protection from Covid-19 infection to the wearer, but did not examine whether the wearer protects others by using the item.

The study compared how well protected one group of people who used masks were compared with a second group who did not use them. The results of the study were announced in a statement released by Copenhagen’s Rigshospitalet.

It is important to note that the study looked exclusively at the protective effects of masks for the wearer, and not at the wearer’s ability to protect others.

As such, the study cannot be used to draw conclusions on the general merits of using face masks as an effective preventative measure against Covid-19 infection, the researchers behind the study said.

The research project involved two groups totalling 6,000 people, and was conducted in April and May this year, when face mask use was not widespread in Denmark.

During this period, Denmark’s lockdown was still ongoing, with many businesses and public institutions closed.

That difference is not big enough to conclude with certainty a benefit of using face masks with regard to protecting oneself from infection.

The researchers stressed that there are limits to the conclusions that can be drawn from the results.

“The study thereby fails to confirm the expected halving of risk of infection for the wearer of the face mask, but the results could suggest a moderate level of protection of 15-20 percent,” the Danish-language press statement notes.

“According to the study authors, their findings offer evidence about the degree of protection mask wearers can anticipate in a setting where others are not wearing masks and where other public health measures, including social distancing, are in effect,” reads the English-language counterpart.

“The findings, however, should not be used to conclude that a recommendation for everyone to wear masks in the community would not be effective in reducing SARS-CoV-2 infections, because the trial did not test the role of masks in source control (transmission from an infected person to others) of SARS-CoV-2 infection,” it adds.

Neither did the study examine the effects of face masks in situations in which it is not possible to maintain a social distance, the researchers note.