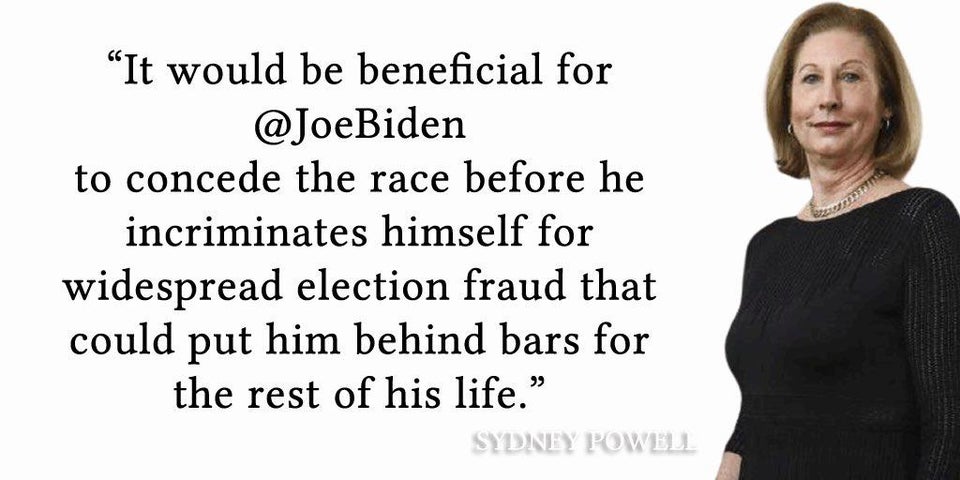 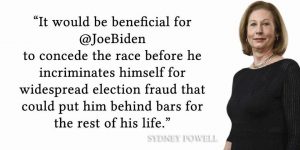 EDITOR’S NOTE (Nick Stamatakis): Day by day evidence is accumulating from all corners that the Nov.3 election was marred by massive fraud.  One of the most credible analysts, Dr. Navid Keshavarz-Nia, a cyber-security expert touted by the NY Times and others as the best in his field, alleges (and his allegation is part of Sidney Powells’s lawsuits), that hundreds of thousands of votes were transferred from Trump to Biden in all battleground states… Also, Matt Braynard of the Voter Integrity Project (VIP), accumulated data which prove that tens of thousands of votes are illegitimate in many states… Just yesterday the FBI requested access to Mr.Braynad’s data… We are still hopeful that there are enough patriots in the FBI to do the right thing.

Should Biden worry about his own personal involvement in a series of criminal acts? It seems that we are only a few steps away from this point… He was not joking when he said it himself.  It was a very telling slip of the tongue of the senile candidate (video below)…

During the weeks following November 3rd, innumerable election experts and statistical analysts have pored over the voting data upon which former Vice President Joe Biden’s purported campaign victory ostensibly stands. A growing body of evidence ranging from straightforward ballot audits to complex quantitative analyses suggests that the tabulation of the votes was characterized by enough chicanery to alter the outcome of the election. Consequently, a consensus has gradually developed among the auditors of publicly available information released by the states, and it contradicts the narrative promulgated by the Democrats and the media. The more data experts see, the less convinced they are that Biden won.

Among the analysts who question the legitimacy of Biden’s victory is Dr. Navid Keshavarz-Nia, a cybersecurity expert whose technical expertise was touted by the New York Times last September and who has been described as a hero in the Washington Monthly. It’s unlikely that either publication will be singing his praises for his work pursuant to the recent election. His damning analysis of the electronic manipulation of votes that occurred in the early hours of November 4th appears in a sworn affidavit included with C.J. Pearson v. Kemp, a lawsuit filed by Attorney Sidney Powell in the U.S. District Court for the Northern District of Georgia. His nine-page affidavit (Exhibit 26) describes how it is possible to manipulate votes, where this occurred, and sums up his findings as follows:

I conclude with high confidence that the election 2020 data were altered in all battleground states resulting in hundreds of thousands of votes that were cast for President Trump to be transferred to Vice President Biden. These alterations were the result of systemic and widespread exploitable vulnerabilities in DVS, Scytl/SOE Software and Smartmatic systems that enabled operators to achieve the desired results. In my view, the evidence is overwhelming and incontrovertible. 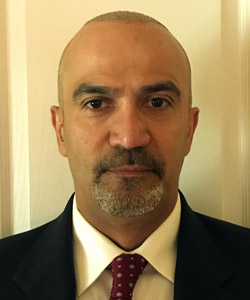 Dr. Keshavarz-Nia is by no means the only expert to reach the conclusion that widespread vote-tampering occurred. This examination of the election results, for example, uses quantitative analysis to identify some very odd anomalies in the 2020 vote patterns. But it isn’t necessary to be a sophisticated statistician or cybersecurity expert possessed of arcane knowledge of how voting machines operate to see that enough ballot fraud occurred to change the election results in several states. That Keshavarz-Nia provides his findings in a sworn affidavit, under penalty of perjury, renders him highly credible. Still, his conclusions are rather opaque to anyone without an enormous amount of training and experience in his field. This requires many of us to take what he says on faith.

Bearing this in mind, Matt Braynard of the Voter Integrity Project (VIP) approached the 2020 results in a far less arcane fashion. His team analyzed publicly available data on absentee ballots and he explained his findings in a way that any intelligent voter can understand. VIP looked at suspicious ballot activity in Arizona, Georgia, Michigan, Nevada, Pennsylvania, and Wisconsin. Among the most significant VIP findings involved people who changed their state of residence, yet voted absentee using their prior address. In Arizona, which Biden “won” by 10,457 votes, there were 19,997 questionable votes. In Georgia, which Biden “won” by 12,670 votes, VIP found 138,221 such votes. In Wisconsin, which Biden “won” by 20,608 votes, there were 26,673 such votes. As Braynard told the Epoch Times:

This election, it appears to me, has been decided by ballots that are highly questionable.… I can give you the list of the people who voted in this election, who filed National Change of Address cards in Georgia, moving themselves to another state.… I can also show you the subsequent state voter registrations of these individuals in other states, who then cast absentee ballots back in Georgia.… I have no confidence that Joe Biden is the deserved winner of this election.

Braynard has been asked to present the findings of the Voter Integrity Project to Monday’s hearing with members of Arizona’s legislature. Moreover, as Braynard tweeted Friday, “The VIP findings have also been included in court filings in PA, GA, MI, WI, and AZ, including declarations we collected.” Sunday, another tweet by Braynard revealed that the FBI has proactively requested VIP findings that may indicate illegal ballots.  Meanwhile, no discussion of 2020 election skulduggery is complete without a discussion of the Democrat precincts that record more votes than registered voters. Rep. Bill Posey (R-Fla.) tweeted the following on that perennial topic: “According to an affidavit in the MI lawsuit, one Michigan precinct/twnship had 781.91% turnout. How does this happen?”

Good question. No fewer than six precincts listed by Rep. Posey experienced turnout exceeding 120%. Another 10 allegedly enjoyed 100% turnout. This is an insult to the electorate’s intelligence, and it happened in Democrat precincts all across the nation. From WWII through 2016 average turnout in a presidential election was about 56%. Yet we are expected to believe that, in 2020, the national turnout was 66%. It simply does not pass the laugh test. This is obviously the result of widespread Democrat chicanery facilitated by high-handed flouting of federal, state and county election laws. Joe Biden’s victory is no more legitimate than his plagiarized rhetoric or working class credentials. His Potemkin presidency would be no more authentic than the man himself.