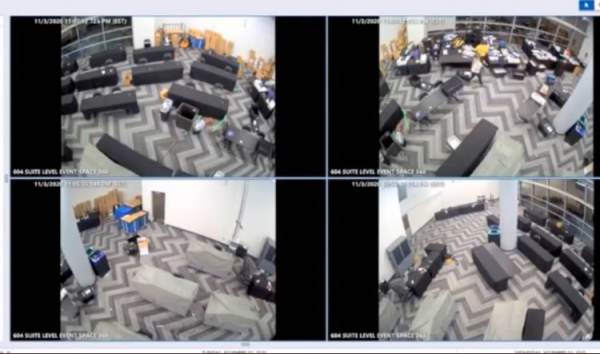 EDITOR’S NOTE: For days and weeks we are watching the mainstream press close their eyes in front of mountains of evidence: thousands of sworn affidavits, statistical analyses (which have been used in Court for the past 15 years to overturn election results), violations of election laws, etc…  Now we have even a “smoking gun”: a video from Georgia showing election officials take four suitcases filled with ballots from under a table – while they have asked everybody else to leave the room…

The Georgia Senate Oversight Committee held a hearing on Thursday on the massive election fraud in the state.

President Trump was ahead of Joe Biden by more than 110,000 votes in Georgia on election night when all of a sudden Fulton County stopped counting ballots after a pipe burst.

We now know that a pipe never burst. It was all a lie in order to kick out poll watchers while a few crooks stayed behind to count illegal ballots for Joe Biden.

Trump’s legal team showed a video from the State Farm Arena tabulation center when poll workers were told to leave at 10:25 PM.

A few “workers” stayed behind and were seen pulling suitcases full of ballots out from under tables to be tabulated!

Close up photo of the suitcases being wheeled out from under tables: