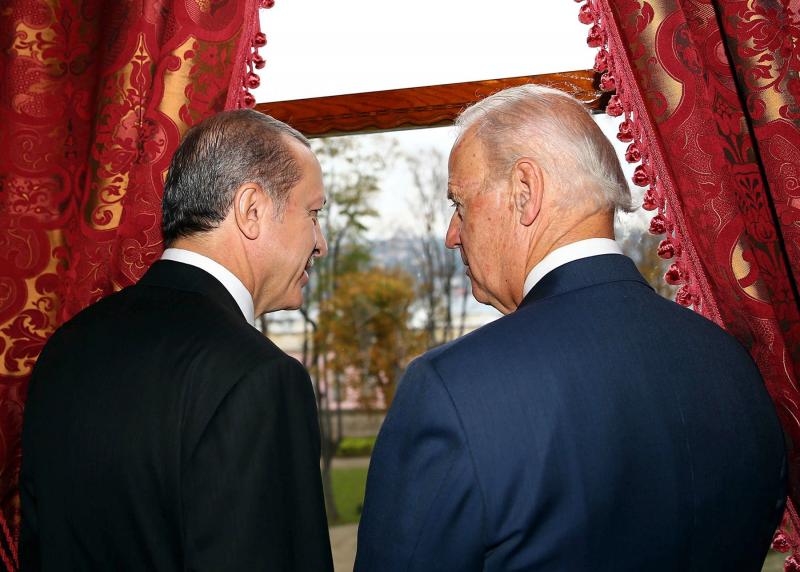 EDITOR’S NOTE (Nick Stamatakis): Former US Ambassador (and “swamp crawler” par excellence) Kurt Volker, offers a sobering analysis to all those foolish Greek and Cypriot “correspondents” – and to even more foolish Greek and Cypriot politicians – who jumped of joy at the “fake news media” announcement that Biden may be elected President… Their joy had probably more to do with the possibilities of “doing business” with the corrupt administration of one of the most corrupt politicians in US history, Joe Biden…

This analysis by Volker makes it crystal clear that in the “swamp”, where Turkey spends a cool $150 million per year for various lobbying activities, Greek interests stand no chance for anything better than an “honest” compromise.  In plain terms, this is translated as: “Greece will lose sovereignty rights over a certain part of its EEZ in order to help the “swamp” maintain the alliance with Turkey…  Should we remind the “useful idiots” in the Greek press that Obama abolished a very old tradition and, instead of England, made his first foreign trip (2009) to Turkey in order to pay his dues to Erdogan? All of Obama’s people will be running foreign policy for Biden – if he is the winner of the post-election legal battle.

Let me close by reminding everyone of this central, decades-old, principle of Greek geopolitics and Greek diplomacy: Greek interests are best advanced when the U.S. is cooperating with Russia.  The deeper the cooperation the better the Greek interests are advanced. Why? Because Turkey’s geopolitical value is diminished.  It so happens that at this historical juncture, Greek interests coincide with the interests of the American people and NOT with the interests of the “swamp”. The US needs to at least reconcile with Russia if we are going to win the battle against China…

You can apply this principle to other issues, such as “whose interests Karloutsos and Pat. Bartholomew promote”, judging from the way they are acting in Ukraine and elsewhere: By helping to exacerbate friction between US and Russia they do not advance Greek interests and certainly not the interests of the American people…

By Kurt Volker (Former US Ambassador)

Both the Obama and the Trump administrations sought to improve U.S.-Turkish strategic cooperation, but without much success. The stars may be aligning for the Biden administration to make it work.

For decades, Turkey was a sometimes awkward but always strategic ally of the United States and a key member of NATO: strategic, because with a substantial military and a critically important geography, Turkey provided a bulwark against the Soviet Union and a window toward the Middle East and Iran; awkward, however, because of the military’s dominant role in Turkish democracy, abuses of human rights, territorial disputes with Greece, the dispute over Northern Cyprus (which complicates NATO-EU relations), and Turkey’s perpetually up-and-down economy.

After the end of the Cold War, it appeared for a time that Turkey’s democracy and economy were finally maturing, and Turkey would have a vital relationship with the European Union, possibly as a member, likely as a critical trade and investment partner, and definitely as a regional power. The United States likewise maintained a close relationship with Turkey, especially its military, during and after the first Gulf War. Turkey presented a unique model of a stable democracy with a majority Muslim population in an increasingly turbulent neighborhood.  The country was becoming more democratic, more prosperous, and more like-minded.

That positive trajectory took a sharply negative turn beginning in the mid-2000s. The AKP Party brought Islam into politics in Turkey. The United States and Turkey diverged over the war in Iraq in 2003. The two sides have diverged even further over the war in Syria, with Turkey accusing the United States of supporting Kurdish terrorist groups. Turkey has blamed the United States for the 2016 coup attempt, and bristles at what it sees as U.S. protection of Fetullah Gulen, whom Turkey accuses of organizing the coup. Turkey has turned to Russia for S-400 air defense missiles, intervened in Libya, Syria, and Nagorno-Karabakh, and sought to build a role as a regional power supporting Sunni Muslim political movements.

This has put Turkey at odds with Egypt, the UAE, and Israel, to name but a few, while aligning it with Qatar, which has its own dispute with the other Gulf States. Although aligned with Russia on air defense, Ankara is on the opposite side of Moscow in Libya, Syria, with respect to Crimea, and also with respect to Armenia and Azerbaijan. After having shot down a Russian fighter jet over Turkish airspace in 2015, Turkish soldiers will now uneasily man an outpost in Nagorno-Karabakh alongside Russian “peacekeepers.”

The United States and the EU have both criticized President Erdogan for cracking down on press freedom, fostering corruption, and weakening democracy in Turkey, leading Erdogan to distance from the United States and Europe even further. The EU blamed Turkey for failing to stop Syrian refugee flows into Europe, and now has a devil’s bargain of paying Turkey to keep them in camps in the eastern part of the country.

With all of these accumulated divergences and grievances, it is no wonder that U.S.-Turkish relations have failed to improve materially over the past several years. But things may now be changing in such a way as to give the Biden Administration a fresh opportunity to engage.

First, with the United States seeking to pull out of Syria and Iraq, the dispute with Turkey over Syrian Kurdish groups becomes less salient, while the U.S. will need to rely on Turkey as the most significant power in the region to prevent security threats from re-emerging and impacting U.S. and European interests.

Second, there has been little “love” in the love-hate relationship with Russia over the past year.  Turkey may well be more interested in strengthening ties with the United States and NATO as reassurance against Russian moves in the region. There may be room to negotiate a solution to the current stand-off over S-400 missiles (and Turkey’s lack of access to F-35 fighters).

Third, the Turkish economy and finances are struggling again. While Erdogan could rely on sufficient public support and could afford to stiff Europe during prosperous times, he will need to change course to revive the Turkish economy today. Despite Erdogan’s aggressive posturing over territorial disputes with direct bearing on gas deposits in the Eastern Mediterranean, Turkey will have an interest in negotiating solutions so that it can realize profits in the near term.

Fourth, and most important, Erdogan’s power in Turkey will likely come to an end during the course of the Biden Administration. On a recent visit to Istanbul, I was struck at how many people — whether they were cooperating with the Erdogan government or opposing it — believed that Erdogan’s leadership of Turkey would end in the next 1-3 years.

Despite all the differences that have emerged with Erdogan’s Turkey over the past several years, at a fundamental level, U.S. and Turkish interests remain strategically aligned. With new leadership in the United States, and eventually perhaps in Turkey as well, there may be an opportunity for a fresh, “everything on the table” dialogue among new interlocutors that can benefit both countries — as well as the EU, NATO, and the wider region around Turkey.