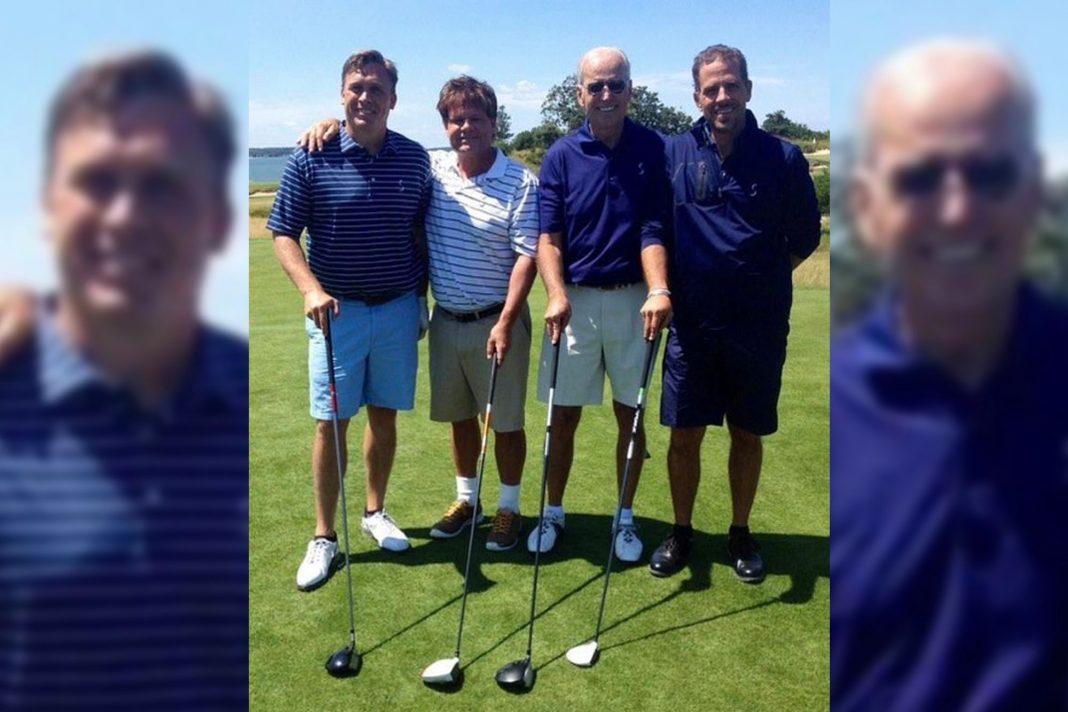 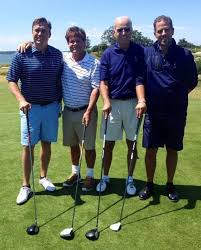 EDITOR’S NOTE: In this article of October 31, the Nationalist Review presents a full series of emails from Hunter Biden’s “Laptop from Hell”, including some well-known Greek names. It shows the networking behind the Biden and Karloutsos families… The two families are organized as lobbying firms selling access to power – which in most cases is photo ops” and pure fresh air…

Hunter Biden, In His Own Words, Describes Trading Access To White House For Burisma Funding

Nationalist Review is able to name the individuals that Hunter Biden, acting under the auspices of his duties as Chairman of the World Food Program USA, plotted to place in the same room as Joe Biden on 16 April 2015. This was the meeting reported in the New York Post, but what was not discussed in their original article was the location, the cover story, and the date of that meeting.

We can now disclose that Hunter Biden, in coordination with his business partner, Devon Archer, organized a private dinner which Hunter Biden explicitly described as “ostensibly” to discuss “food security,” but in reality was intended to place a Burisma advisor in the same room as the Mexican Ambassador to the United States and Joe Biden.

Further, following the threads related to these parties, Nationalist Review can not only independently confirm the New York Post and Rudy Giuliani’s report that Joe Biden met with Vadym Pozharskyi, but we can reveal the date that they met, the names of other attendees privy to the event, and disclose a month of planning during which Hunter Biden utilized his position at the World Food Program in order to orchestrate a Burisma business meeting with officials from the United States government, the Mexican Ambassador, and Vadym Pozharskyi.

What we found was a consistent pattern of abuse, whereby Hunter Biden leveraged his proximity to the White House and the positions that it afforded him in organizations such as the World Food Program USA, in order to corral people of influence into the same room.

The New York Post was first to report that Vadym Pozharskyi thanked Hunter Biden for introducing him to then-Vice President Joe Biden, but what hasn’t been disclosed yet is that this was part of a long drawn out plan stretching back more than a month before that meeting occurred.

And while Joe Biden denies that this meeting ever took place to begin with, Hunter Biden’s emails show that he intentionally orchestrated the meeting—which also included the Mexican Ambassador, representatives from their business dealings in Kazakhstan, and other Rosemont Seneca business associates—and made this clear in his emails to one individually whom he extended the invitation to.

In fact, the guest list for the meeting was constructed by Rosemont Seneca itself.

“Ok- the reason for the dinner is ostensibly to discuss food security,” Hunter Biden wrote to Michael Karloutsos. “Dad will be there but keep that btw us for now. Thanks. Also let David know I will get back to him asap- probably sometime next week when we are through these next few days with beau- which also is just btw us.”

The operative word there is ostensibly.

And the decision to inform Karloutsos of that matter was a mistake. He told his father, who then told another friend in the Greek community. In fact, there are a handful of people who could readily confirm Joe Biden and Vadym Pozharskyi’s presence at that dinner.

Mike Manatos, a DC lobbyist, was soon emailing Hunter Biden about the event and subtly hinting at his curiosity about it.

A frustrated Hunter Biden would soon email Karaloutsos, warning him that he wanted to keep the meeting as “low key as possible.”

Karaloutsos would go on to explain that his dad had “innocently” informed others about the meeting, with Hunter Biden responding that “you know the reason why I want to keep it in the family – I love MM too, but that’s creating a whole other dinner that I can’t handle.”

“I know. I’m with you. Totally understand. All good,” Karloutsos replied.

“I have brought every single person you have ever asked me to bring to the F’ing WHite House and the Vice President’s house and the inauguration and then you go completely silent – I don’t hear from you for months,” Hunter Biden wrote in an explicit description of his quid-pro-quo relationship with a Mexican financier. “I don’t know what it is that I did but I’d like to know why I’ve delivered on every single thing you’ve ever asked – and you make me feel like I’ve done something to offend you.”

This email, which can be read in its entirety below, was the culmination a breakdown in years of negotiations with Miguel Alemán Magnani (MAM), the CEO of Interjet, a Mexican Airline, and about as close as one can get to Mexican royalty. MAM is the son of a governor, the grandson of a president, and a wealthy business magnate in his own right.

Kassam did not return the request for information, but rather published this brief piece relating to the inquiry. Unfortunately, additional information can be added to supplement National Pulse’s reporting reveals a multi-year campaign to get Burisma operatives in the same room as both Mexican and U.S. officials in order to support

Seeking liquidity for their operations in Mexico and elsewhere, Biden’s Rosemont Seneca team discussed buying back Aleman’s shares at a discount and then selling them to another party in what they described as a “dog and pony” show:

Eventually, as described above, Hunter Biden was able to coordinate a meeting between Joe Biden, Vadym Pozharskyi, and the Mexican Ambassador. But their initial success with Joe Biden did not spell smooth sailing for the rest of their scheme. Emails from the following year indicate that Alemán’s help would not reach as far as Hunter Biden had sold to the oligarchs in Ukraine.

This series of emails, originally disclosed by another party who has access to the drive and uploaded 29 documents to Scribd, reveals the issues—financially and politically—that Hunter Biden’s team was facing.

Hunter Biden reached out to Miguel Alemán in order to request that he facilitate a visa for Nikolay Zlochewsky who was being blocked from entering both the United States and Mexico. 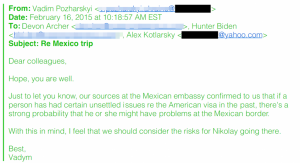 “If [Miguel Aleman] can’t do that within next day or two, I will have to tell him not to risk [being denied entry],” Hunter Biden responded. 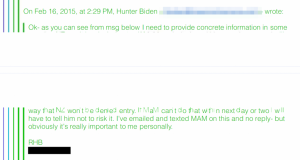 But Aleman was unable to assist them in their efforts of getting the oligarch into his country. Instead, he told them that he would need two weeks to possibly have an answer. To tide them over, he offered them $250,000 as “band-aid money,” according to Jeffrey Cooper.

This long-game campaign eventually matured into a complete failure—with Biden associate Jeffrey Cooper lamenting that he was so strapped for cash on 16 February 2015, that he would have to “fire 30+ people” in order to make ends meet. Hunter Biden, for his part, was in an even tighter jam writing, “Going to have to do some serious back pedaling with Burisma…most likely jeopardizes my board position, which means my options have become seriously limited at exactly the wrong time. But it is what it is.”

Nationalist Review was eventually able to obtain nearly all of the emails from the Hunter Biden laptop after a source offered to grant us access to a clone of the drive that they obtained from Former Mayor Rudy Giuliani.