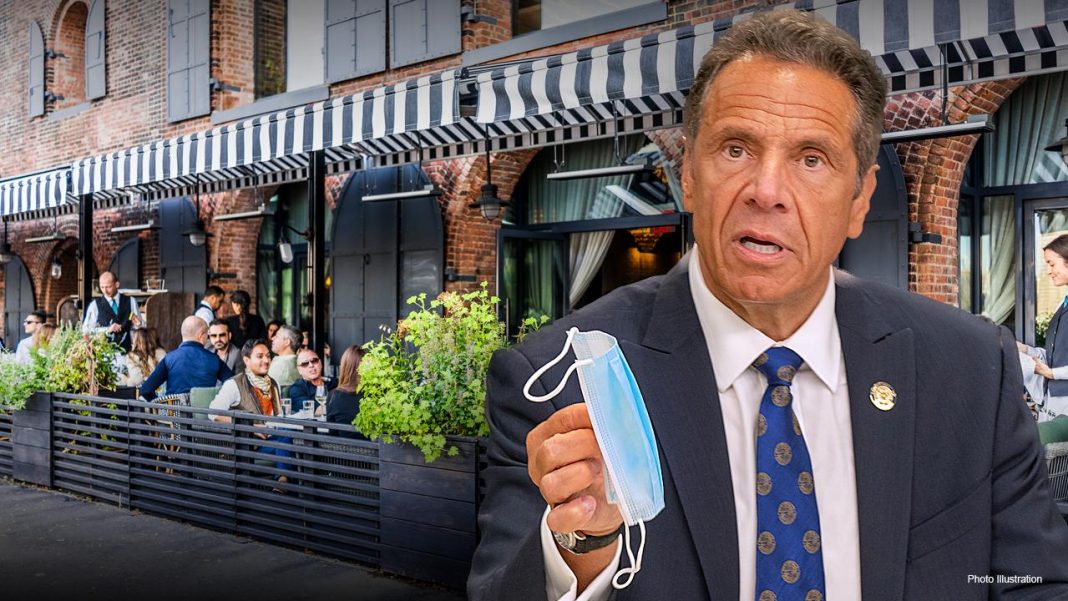 While many industries that form the backbone of the American middle-class have been hit by the pandemic one of them stands out for its ruthless and planned destruction: the restaurant business, which happens to also be the backbone of our community.  Yes, it is true that the younger generations of Greek Americans have grown out of the diner and restaurant business and have moved on to become top professionals and successful businessmen in every field, while others have reached the highest levels of academia and government.  But for many in our community, and especially for the parishes, it is the restaurant businesses that provide an enormous amount of support – and we all can see numerous examples around us.

For months we have been watching leftist politicians wage an endless war on restaurants, especially in the Northeast, in Illinois, and in California…  We are watching these power-hungry hypocrites impose rules on everybody else and especially on the restaurants, while they do not follow them themselves.  How many times did we see on TV one or two of them (the latest example is the Governor of NJ) close down inside dining and the next moment they are seen with their families celebrating in a “special” restaurant which opens up only for them?

In New York, Andrew Cuomo and Bill de Blasio compete with each other for the highest prize on stupidity.  All inside dining is now closed in NYC, while many restrictions are in place in the NJ-CT-LI suburbs) and as a result, tens of thousands of our fellow Greek-Americans are suffering, while NYC is being destroyed.  Many Manhattan restaurants have already closed permanently and with them, a whole era has come to an end.  At some point, we need to see the Mayor’s and the Governor’s actions for what they truly are:  Blatant attempts to impoverish the middle class.  While most mega-stores and supermarkets are crowded beyond description, while all means of transportation are working to full capacity, the restaurants are singled out, without any “science”, as a place where the virus will be definitely transmitted… According to NY State’s own data, only 1.3% of the spread of the virus happens in indoor dining, while over 70% happens in household gatherings – and therefore it’s impossible to control! 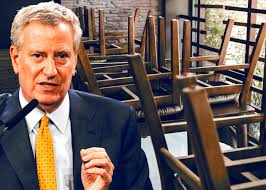 The same holds true for the Churches… But the Catholic Church and the Jewish community rose up (Our GOA  was busy attending BLM marches…), went to court and knocked down Cuomo’s regulations as unconstitutional… The same “knockdown” can happen for the restaurant business.  The only science that exists is that, with all the precautions in place, there is very little chance for any virus transmission in a restaurant…

But I will turn this argument upside down: If there is covid-19 spreading in a restaurant why not in a bus, a subway, a train, or an airplane? (Airplanes are now flying full capacity in most cases – the same for the rest of transportation…) Why not in a Walmart or a Costco? Why not in a crowded BLM march? Does anyone think that wearing these cotton masks will stop the virus?  I have many fishermen friends and one of them put it right: Trying to stop covid with a cotton mask is like trying to stop mosquitos with a fishnet… Take a look at this photo – the image on the left is the size of Covid-19 droplet and the image on the right is a human hair… Do we realize how stupid we are when we make “controlling the spread” of the virus the center of our policies? 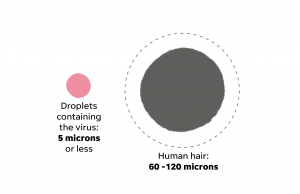 Do you also wonder why you have NOT seen this image anywhere in the mainstream media? Isn’t this information one of the first things any well-meaning government should tell us? The idiotic California Governor Gavin Newsom imposed restrictions even on walking on the beach!! And they arrest people when they swim or paddleboard!!

What else do we need to see before we Greeks, who are known for our fighting spirit through the centuries, stand up and start fighting?  When will we fight for our “life, liberty, and the pursuit of happiness”, for our rights as they are enshrined in the Constitution and the Bill of Rights? If any group is to lead this fight, it should be us!  And if any group among us has to lead this fight, this should be the restaurant owners and employees.

In June the Pan-Gregorian Association (a Greek-American restaurant purchasing cooperative that operates mostly in the Northeast) made a special appeal to Democrat Senator Bob Menendez and submitted to him a set of sensible proposals (here is the text of the PAN-GREGORIAN PROPOSAL).  But that was in June and it made sense then…

Now we are dealing with a brazen attempt to turn this beautiful country into a socialist economy… Bill Gates just said today that he wants all restaurants closed for 6-8 months!! Shamelessly he suggests this on the same day Pfizer announced that 100 million people could be vaccinated in about two months, while two more vaccines from other companies are getting ready to roll out!! Why did he say that, knowing that vaccinating the most vulnerable would minimize any risk? What is the science behind it? THERE IS NO SCIENCE… Please watch this ultimate globalist (after minute 7:40) explain in a very sleek way how he thinks that nothing will be normal not only for 6-8 months but for 16-18 months… Unbelievable!!!

Closing for long periods of time the restaurants, where 10% of the population works (not to mention their suppliers and other supporting businesses), is equivalent to breaking the back of the middle class… In addition to everything else, restaurants are a great mechanism of upward social mobility as we all have learned at some point… I know very few people, and even fewer Greek-Americans, who have not worked at a restaurant even for a small period of time… So many among us worked at a restaurant when they needed money to earn a degree, to start a business, to buy a house… Some even to become movie-stars…

Closing them down will turn millions of people into beggars for a government check… And do you think that this time they will close for only a few months?  In the same way the 4 weeks of lockdown in March-April became 8 months, in the same exact way they want to close down the restaurants for good… Their main reason has nothing to do with covid-19. The main reason is that restaurants are the “greenhouses” of entrepreneurship, the backbone of the middle class, and one of the best mechanisms – as all businesses are – of upward mobility (along with education and the military) America has…