Even the Pope Seems Iffy on the Vatican’s Astronaut-Themed Nativity. Here’s How the Artwork Became a Lighting Rod

The ceramic crèche was made by art students and teachers in the city of Castelli in 1965, but it’s too avant-garde for some.

This year has brought so many strange art-related developments, from mysterious desert monoliths to Cookie Monster murals. And if the final square of your “Memes of 2020” bingo card was “time-traveling astronaut visiting Baby Jesus,” you are in luck. Believe it or not, this marvel comes courtesy the Vatican.

In case you missed this latest bit of news, here is everything you need to know.

Wait, what in the world are you talking about?

Two weeks before Christmas, the Vatican brought forth its annual display of its nativity scene. The tradition goes back to Pope St. John Paul II, who kicked it off in 1982.

Catholics wait with bated breath for the unveiling of each year’s sculptural set, usually donated by an Italian town. This year, the Vatican also unveiled its annual Christmas tree, a 91-foot-tall spruce from Slovenia.

“The Vatican wants the Nativity scene and Christmas tree this year to be a sign of hope against COVID-19,” Rome Reports relayed at the end of October. But since its December 11 unveiling, its message of comfort has been somewhat drowned out by a wave of reaction to the display’s unconventional nature. 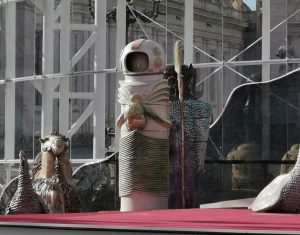 Well, it’s not the usual.

The figures’ bodies are defined by simple cylinders, topped by spheres for the heads, with no limbs. There’s no traditional setting, no wooden manger, no straw on the ground, just a very minimalist empty space.

“It made me think of bowling pins with Baby Jesus as a ball,” one visitor told Reuters of the design.

Perhaps alluding to a landscape, a glowing light behind the figures makes it seem as though they’re being struck by lightning.

What attracts the most attention, however, is the figure who appears to be an astronaut, in a spacesuit, gripping the moon in his hands. There’s also a sinister-looking figure in a black helmet who many have compared—perhaps on account of the space theme—to Darth Vader from Star Wars.

So, where did this display come from?

The sculptures on view are part of a larger, 52-piece set created by students and teachers of the F.A. Grue Art Institute, in the town of Castelli. Started in 1965, it took a decade to complete. Figures from the Vatican crèche, a monumental nativity scene made up of larger-than-life ceramic statues made in the village of Castelli in the Abruzzo region of Italy, at St. Peters Square in the Vatican. (Photo by Vincenzo Pinto/AFP via Getty Images.)

Known for its ceramics tradition, Castelli lies in Italy’s Abruzzi region. In fact, the five colors known as the “Castelli Palette” predominate in the ceramic nativity.

The St. Peter’s Diocese website helpfully points out art historical precedents for the figures’ strangely proportioned features, including Mesopotamian sculpture. It also mentions precedents as diverse as Renaissance art, the neo-baroque, and the work of self-taught artists.

While the ceramic figures have created a sensation in this year’s Vatican display, this is not the first time they have been seen publicly. The sculptures have even been on tour, going on view in Rome on Christmas in 1970 and later doing several gigs in the Middle East, in Jerusalem, Tel Aviv, and even Bethlehem, Jesus’s birthplace. 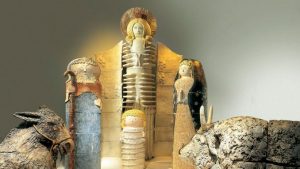 Why in the world is there an astronaut there?

Four years into the Castelli school’s work on the sculpture set, astronauts first walked on the moon, in 1969. In honor of that accomplishment, the sculptors put in their Italian Neil Armstrong.

Many have pointed out that previous Vatican displays have also included seemingly incongruous elements.

For instance, in 2016, a Maltese fishing boat appeared in the display in reference to the plight of refugees (just as America’s wall-building president was about to take office).

2017’s realist display from the town of Montevergine featured figures performing acts of mercy, like feeding the destitute, visiting the incarcerated, and clothing the naked. That display, too, generated controversy, when the depiction of “clothing the naked” was considered to be so sexy as to be potential gay propaganda, with Catholic Family News blasting it as “obscene.”

What do critics have to say about the Space Nativity?

The National Catholic Register complains of a “satanic-looking executioner—but no manger.” (Artist Fausto Cheg, a member of the team that created the sculpture, has said that the executioner figure, in fact, refers to the abolition of the death penalty.)

A writer for the Catholic Herald calls the nativity “embarrassing,” but opines that perhaps its break with tradition can reach new audiences: “When the Church encounters a new culture of, say, an indigenous tribe, or a society quite foreign to European aesthetics and sensibilities,” he writes, “She will experiment with blending some of their native expressions with the Church’s patrimony as part of the work of evangelization. It is therefore fair that She also do this with modern Western culture.”

And who’s to say that’s wrong? Writer Matt Stansberry took to Twitter to quip that the nativity “by far the church’s best effort to bring me back into the fold.”

Has Pope Francis weighed in?

In general, he is pro-anachronism. “It is customary to add many symbolic figures to our nativity scenes,” Pope Francis said in 2019. “Children—but adults too!—often love to add to the nativity scene other figures that have no apparent connection with the Gospel accounts. Yet, each in its own way, these fanciful additions show that in the new world inaugurated by Jesus there is room for whatever is truly human and for all God’s creatures.” Nativity scene of the Vatican Firefighters during the inauguration of the exhibition “100 Nativity Scenes” under Bernini’s colonnade in St. Peter’s Square, December 13th, 2020. (Photo by Grzegorz Galazka/Archivio Grzegorz Galazka/Mondadori Portfolio via Getty Images.)

On Sunday, however, the Pope pointedly did not recommend seeing the unconventional Nativity during an address. Speaking to visitors from his window overlooking Vatican Square, Francis instead twice exhorted them to visit a nearby exhibition of more than 100 nativity displays, which he said showed “how people try to use art to show how Jesus was born.”

No mention was made of poor Italian Neil Armstrong. Given the ongoing mocking of the Castelli ceramics display, the silence from the Pope has been widely interpreted as a deliberate snub.