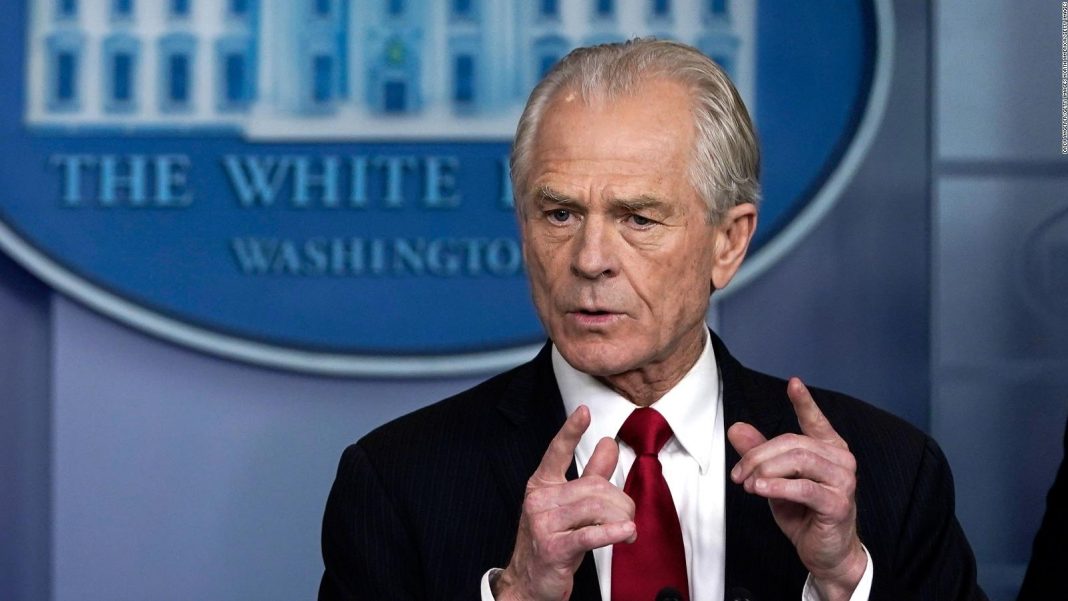 EDITOR’S NOTE (Nick Stamatakis): Not only we should read Peter Navarro’s report but we also should pay attention to the comprehensive (870 pages!!) lawsuit describing all forms of fraud (You can read it here )… This country will not be able to move on to the future unless and until those who committed fraud are taken to court. No Court to this point has taken a serious look at the evidence; all courts (including the Supreme Court) found it proper to escape using procedural excuses –  but in essence, threatened by the thugs of BLM and those hiding behind them…

It’s a truly sad moment when our supposedly great democracy allows these election crimes to happen – because they cancel the democratic process.  If the Democrats were truly “democratic” they would be the first to demand clarity on all accusations over the Nov. 3.  But they are authoritarian and they proved it even more clearly during the pandemic.  And if the press was truly performing their constitutional role we would never see headlines like the one we saw a few days ago at the (owned by Jeff Bezos) Washington Post: “Denying the Holocaust is Dangerous. Like Denying the Election Results”!!!

Those of us who have lived under fascism and authoritarian regimes we are absolutely disgusted… Millions of Greeks suffered through both right-wing and left-wing authoritarianism (Greek military dictatorship, Albania, Soviet Union, and all eastern communist countries). But the “FASCISM OF THE LEFT IS THE WORST KIND”!!! Who said that? None other than Mikis Theodorakis with all the wisdom of his 90 years of age in a demonstration in Athens…

THE FASCISM OF THE LEFT IS THE WORST KIND…

By Kenneth Timmermann (The American Thinker)

Americans increasingly live in two parallel universes, and this is a shame.

One side takes it as Gospel that Joe Biden and Kamala Harris won an overwhelming victory on November 3 and will take the oath of office on January 20.

Another half of the population – according to a recent Rasmussen poll – believes that Donald Trump won the highest number of votes in history for the re-election of a sitting president and was cheated out of victory by overwhelming and widespread election shenanigans. An earlier poll found that even 30% of Democrats said it was likely or somewhat likely that the election was “stolen from Trump.”

As former U.S. Senate Patrick Moynihan used to say before the era of Big Tech, you’re entitled to your own opinion, but not your own set of facts.

The report White House advisor Peter Navarro recently compiled as a private citizen should be required reading for Democrats who insist there is “no evidence” of widespread voter fraud. The Big Tech bosses who plaster disclaimers over the president’s tweets should read it, too. 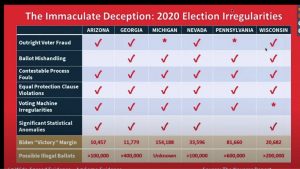 So should Never-Trumpers and members of Congress, who undoubtedly will be called to adjudicate between dueling slates of electors on January 6.

Navarro looks at the six swing states whose results the Trump campaign has been contesting, and lays out a grid of election irregularities that swung all of those states to the Biden-Harris ticket in the days following the November 3rd election. “These six dimensions include outright voter fraud, ballot mishandling, contestable process fouls, Equal Protection Clause violations, voting machine irregularities, and significant statistical anomalies,” he writes.

He doesn’t engage in conspiracy theories, or impute malign intent or foreign domination of voting machine companies. While those may be true, it will take a criminal investigation that could last years to prove them.

In the real world, you don’t often get to see the man behind the curtain, the Wizard of Oz of election fraud and voting machine manipulation. It’s only in fiction that the mastermind has a name, a face, and a plot that rivets you to your chair.

But what thrills in fiction becomes horror in the real world. Half of the country is still reeling in shock as they watch the Democrat National Committee and their communications directorate in the national media continue to gaslight us.

For the nature of the evidence Navarro sets out – the evidence the Democrats and the media scream doesn’t exist – is glaringly obvious. As my father used to say, if it had been a bear it would have bitten you.

For example, hundreds of thousands of ineligible voters cast ballots that were counted in all six of the swing states – enough right there to tip the results in Georgia, Arizona, and Nevada to Donald Trump, putting him at 267 electoral votes.

Navarro explains precisely what he means by “ineligible” voters.

“In a court filing by the Trump campaign legal team, lead counsel Ray Smith provided a list of more than 70,000 allegedly ineligible voters casting ballots in Georgia in the 2020 election. Also in Georgia, over 20,000 people appear to have filed a Notice of Changed Address form to the Georgia state government or had other indications of moving out of state. Yet, these clearly ineligible out- of-state voters appeared to have remained on the voter rolls and voted in the 2020 election.”

This is election fraud at the retail level. Voting illegally, or voting twice, or in multiple states, is a felony. These allegations are easy to verify – but so far, no court has allowed the Trump team to provide the lists of voters Navarro cites. And states controlled by Democrats have systematically refused any outside examination of their voter rolls and screamed “voter suppression” whenever groups such as Judicial Watch have forced them to hand over the evidence in the courts.

Then you have the cemetery vote – at least 8,000 of them in Pennsylvania, and probably more in Philadelphia, Milwaukee, and Detroit – and “ghost” voters who were added to the voter rolls on Election Day by poll workers. In Michigan, for example, thousands of people who showed up without ID were assigned birth dates in 1900 and allowed to vote. This is fraud organized and carried out by others.

In addition, Navarro describes multiple cases of wholesale fraud, especially in Wisconsin and Michigan, where election workers were caught on camera or by multiple eyewitnesses who submitted sworn affidavits running batches of ballots repeatedly through tabulating machines. “Evidence of these particular kinds of “ballot stuffing” are present across all six battleground states,” Navarro notes.

Ballot mishandling was a “multifaceted problem across the battleground states,” he adds. It included poll-workers instructed not to check voter ID in states requiring ID at the polls, a failure to match signatures on mail-in ballots to those in the poll books, ballots accepted without postmarks, ballots arriving at counting stations in already opened envelopes, and large numbers of ballots – in some cases, truckloads – circulating without apparent supervision.

But again: no court has allowed the Trump legal team to present this evidence.

I’m not sure which type of fraud is the more shocking: the brazen willingness of hundreds of thousands of individuals to break the law, the utter contempt of election officials who stuffed the ballot boxes and instructed co-workers how to steal votes with no fear of getting caught, or the Democrat party operatives who organized illegal ballot boxes, such as the “Democracy in the Park” events in Wisconsin.

Finally, zoom out and place the documented examples of retail and wholesale election irregularities in the statistical context of 2020 versus earlier elections.

The failure to check ballot signatures alone would have turned the tide of this election, Navarro argues.

In 2016, the overall voter turnout rate nationwide was 59.2% of the voting eligible population, according to Michael P. McDonald of the non-partisan United States Elections Project. But in 2020, the national turnout rate skyrocketed to 66.7%, while the U.S. population grew by less than 2.8%. Navarro points to sworn testimony from former NASA and MIT data analyst Russ Ramsland, showing that 46 of 47 precincts in Wayne County, Michigan “displayed greater than a 96% voter turnout [while] 25 of those precincts showed a 100% voter turnout.”

“This was theft by a thousand cuts across six dimensions and six battleground states rather than any one single “silver bullet” election irregularity,” Navarro concludes.

But, of course, it never happened. It was just a bad dream and we’re about to wake up. Right?