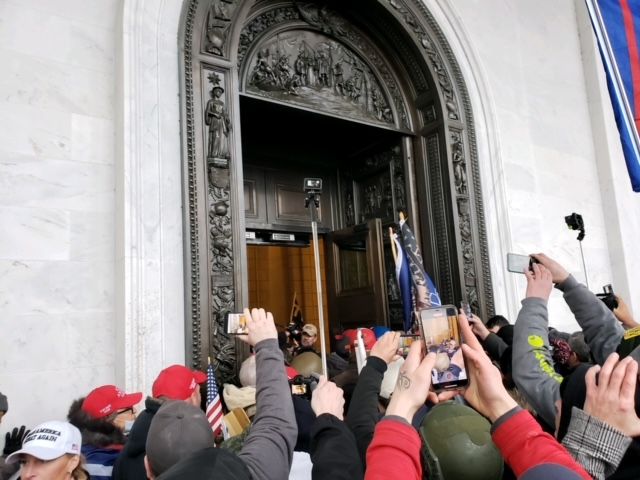 EDITOR’S NOTE (Nick Stamatakis):  Many reports have come to our attention about the infiltration of Antifa and BLM members in the Capitol riots.  I firmly believe that there is a very strong possibility they were there. Why? Marxist groups have written the whole playbook on how to be an “agent provocateur”.  They have all the manuals on the subject – they have written the book…

How do I know? First of all, I was a young Marxist until age 19.  I have read all their books. I know the works of Marx, Engels, Lenin, Trotsky, and even the modern Marxists (those mostly French intellectuals who gave birth to the disgusting “critical race theory” that tyrannizes our schools today) and I know their tactics – thank God I did not practice them… I know Marxist theories better than 99.9% of the Marxists themselves… And I challenge you (and them) to test me if you dare!… Well, they are not going to test me because they know I understand all their dirty tricks… Some of them are still here among us – the surviving dinosaurs of an ugly past… And yes, you guessed it, some are members of the Greek-American press, what a surprise!… They never forgot the left-wing fascism they practiced in their youth – I had the chance to see and feel the proof in recent years…

Let me just say that at age 19 I was lucky enough to come face-to-face with what the Left means by “democracy”.  Then, I was elected as a representative to a Pan-Hellenic student conference by the first-year Law students of the University of Athens – first in votes! At the conference, I, and all the other “reps”, had to sustain a full three weeks of lectures by the “leadership” without the right to express our opinion – among the whole “gamut” of the Left’s “democracy”!! At the end of these three weeks, I quit with a big splash!! A few years later (after the 1981 elections) my former “comrades” became ministers and top administrators in the first socialist government of Greece under Papandreou and went on to destroy the country… By 1985 I had fled the country for graduate studies to the US – thanks to an Onassis Foundation scholarship…  I was very, very, lucky… Until now, when I have to face them again…

So when it comes to the Left’s theory and practice I know them like the back of my hand… Infiltration and provocation are at the top of their list… Voting does not mean much to them: they don’t believe in democracy – if they don’t have the votes they steal them… 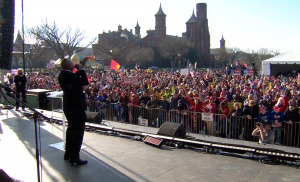 You are going to ask me if I have any proof about yesterday’s events.  You can read the report by our friends of Monomakhos.com below and you can also find testimonies at various websites online. But four weeks ago, on Dec. 12, I participated in the Jericho Prayer and March in Washington DC with many other Christians – and many Greeks among the tens of thousands of people.  Eric Metaxas, was the M.C. and George Michalopulos with Gail Sheppard of Monomakhos.com were among the many speakers. Many Greek-Americans in the audience…  As we were listening to the speakers near the main stage, a young “infiltrator” using a hand-held megaphone started interrupting the rally… But thanks to the power of the audio equipment of the rally, he failed to have a serious impact – except annoying all of us…  Some of the organizers tried to persuade him to leave peacefully – but he was not convinced. He stayed there to annoy us for at least an hour and a half with his sickening rhetoric… Here is his photo – I took it: 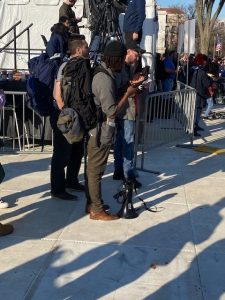 He was carrying all the “tools of the trade” – as you can see… To me, he was just a very familiar image from the time of my youth back in Greece… A real nightmare you may say – but the moment I saw him I knew what he was all about. Clearly Antifa – he had all the marks…  The organizers treated him smartly, with no violence at all, physical or verbal… And eventually, he left… He did not get what he was looking for, to instigate a violent event… On the way back some members of our party were threatened by other Antifa people… They had managed to incite some episodes in other parts of the DC we heard later – but thanks to our very conscious efforts they failed in the main event.

So here is your answer. Were there Antifa in yesterday’s rally? No doubt in my mind at all.  They were there infiltrating and provoking – and as the days go by we will find out more information about their activities.  I would not be surprised if they were assisted by “deep state” forces.  We already have seen reports that the Capitol Police suddenly opened the barricades. Who ordered them?

Yes, there were several emotional Trump supporters in the Rally and maybe some “hotheads” among them.  When you have half a million people gathering, there will be some of them in there… But when I was in DC I walked around the center of the city for 8 straight hours and met many of the Trump supporters from every Christian denomination: they were all very peaceful people and handled themselves with great dignity.  They exercised their first amendment right perfectly.

I will stop here and I will advise the communist NY Mayor Bill De Blasio not to try to use his sick ideology on us anymore… I heard him trying to act as a provocateur again today and got sick in my stomach…He destroyed the City of our dreams already! Enough is enough!… 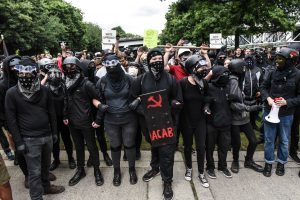 So, Anything Exciting Happen Today?

Here I am, just minding my business.  And what do you know?  People are storming the Capitol.

You see, sometime around early November 4th, 2020, the Missus and I retired to sleep.  Unfortunately, we woke up in a Third-world Banana Republic.  Where things like steeling votes is par for the course.  Everybody does it!  It’s all the rage as those sophisticated Continentals like to remind us poor, naïve Americans.  What’s that French phrase?  Tout le monde!  Yes, that’s it!  “All the world is doing it!”

Anyway, now us Americans are doing it, as well.

I guess we should hang our heads in shame but what good would that do?  From a purely cynical standpoint, the utter brazenness of the steal was a sight to behold.  It was as sophisticated as a plan as anything out of the old Mission: Impossible series.  First, Soros sunk a lot of money into buying just enough secretaries of state in certain key swing states.  Then he got some judges to change the election laws willy-nilly.  That was more or less Step One.

Next came the great Pandemic.  The world’s economy was shut down, and America’s election laws were rejiggered to make mail-in ballots easier.

But there was a problem.  Trump was on to them.  Remember those 13 rallies he did in the immediate run-up to the election?  That was to make sure that the Trumpistas overwhelmed the system.  And they did.  However, the Democrats were on to him.  This time, they decided to see how many votes he actually got and then by hook or crook, they came up with just enough to beat his share.   They waited before they showed their hand, something they didn’t do in 2016.  And they put all their eggs in the electoral basket of four, horrendously corrupt, Democrat-controlled cities.

We were told by the media that the white woman share of the vote would be depressed because Trump is a Bad Orange Man.  In 2016, he got 52% of the white woman vote.  In 2020 instead, he got 54 percent.

I could go on:  Trump was the first incumbent president in history to get more votes than he got in his first term.  Twelve million more in fact.  Never happened before.

And then there’s Creepy Joe.  A senile, possibly pedophiliac and accused sexual hair smeller/groper, who hid out in his basement and could barely string two sentences together got 11 million more votes than Obama?  If you believe that, then I’ve got some ocean-front property in Arizona I can sell you for real cheap.

So what’s a self-respecting political party known for creating modern machine politics to do?  Why, harvest for ballots!  And boy, did they!  And in the end, it looks like they may have outplayed us if the country falls for this latest farce.

Look at the picture below.  If you’ll look closely, you’ll see one of them has a pass around his neck which makes sense since there are no breached doors, broken windows or security people around.  If  a “buffalo guy” really walked into the Capitol with his posse, I think he’d be noticed.

See how all of them are standing?  They’re not moving forward.  They’re posing for the picture!  The Misses tells me “Buffalo Guy” is standing like models do at the end of a runway as part of an 11 point count.

But there is more.

The guy who is playing with his fingers, “Sickle Guy,” wants you to see something!  He wants you see the Communist Sickle on his left hand.  This isn’t something Trump supporters usually sport.

This is antifa and this was planned.

Finally, if you look closely enough, you’ll see something that looks like plastic film in the back of the American flag and behind “Sickle Guy.”  Those are police shields and the guy below the picture hanging on the back wall is a cop who stripped down to his vest and put a mega hat on.  He has on a white buttoned down shirt with his shirt sleeves rolled up.  Not something you would wear to a protest, but something you’d wear to the Capitol if you’re in security.

Their intent was to storm the Capitol and embarrass Trump supporters.  They shouldn’t have shot that woman, though.  Guess they had to keep it “real” and it wouldn’t be real if there was no violence. Folks, this is what goes on in Third-World countries.  But you know what else goes on in Third-World countries?  Exactly what we’re seeing today in Washington, DC.  A staged uprising.  An uprising within an uprising.  And there was Biden all prepared with his little, “I’m the leader and listen to me” speech.  He couldn’t have put those words together if they had given him a year! But rather than let antifa/BLM steal the thunder, I am also sure that the overwhelming majority of the people who were in DC today were there peacefully.  Just like we witnessed a few weeks ago when we were there.  There were no “buffalos guys” walking around.

This was a scam and if the American people don’t look a little deeper, we’re headed for a lot more of this: