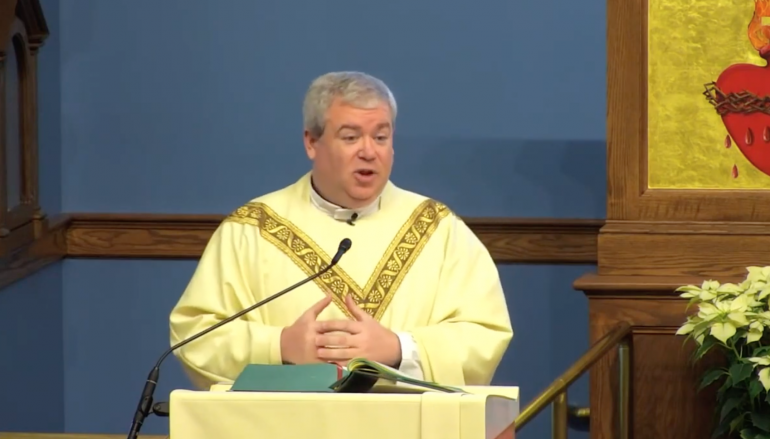 EDITOR’S NOTE: No comments…  Except that “The National Catholic Reporter” called for Reprisals against Catholic Trump Supporters… Which means that the civil war has entered the Christian Church…  Let us hope our Orthodox “leaders” don’t follow suit to be in favor of their handlers. We supposedly have Freedom of Speech and Separation of Church and State, do we?

Here is the worrisome link:  https://www.crisismagazine.com/2021/the-national-catholic-reporter-calls-for-reprisals-against-catholic-trump-supporters

Priest Prepares Congregation for Upcoming Biden Years with Dark Homily: ‘We Are in for It, Folks’

South Carolina Catholic Priest Jeffrey Kirby recently told his parishioners that any Catholics who voted for Joe Biden should be ashamed of themselves.

“Some of you, I know, voted for someone who is now going to suffer and persecute the church for the next four years. That on top of the fact that he supports the utter slaughter of the unborn,” Kirby said on Dec. 29.

“What have you done to your church?” Kirby shouted.

“Watch how our hospitals disappear because we will not follow government dictates. Watch how our support of unwed mothers disappears because of constant and unreasonable regulations. Watch as mother church shrinks. Watch how she is treated by this government, this coming administration.

“And those of you who voted for such an administration bear the responsibility of what you have done. Because we are in for it, folks. And they are already getting ready.

“Have you seen the appointees? Some of the most aggressive, anti-Catholic, anti-organized religion leaders in their various states. And this is what we’re in for.”

In his sharp rebuke of Catholic Biden supporters, Kirby, who led one of the daily invocations as guest chaplain for the House of Representatives last January, asked if they somehow missed the lessons learned under Soviet communism, Nazism and similar current regimes like the one in Venezuela.

“If you somehow missed that, how?” he asked. “Have you been living under a rock?”

Should a U.S. president who supports legislation that goes against the beliefs of the Catholic Church be excommunicated?
Completing this poll entitles you to The Western Journal news updates free of charge. You may opt out at anytime. You also agree to our Privacy Policy and Terms of Use.

Kirby even berated church leaders for not taking a stand against Biden, saying, “never forget the spiritual mystics tell us that the pavements of hell are paved with the skulls of bishops.”

Kirby, who has authored several books, is not exactly a nobody priest in the Catholic Church. Last summer, Pope Francis named him a papal Missionary of Mercy, a touted honor in the Catholic religion.

Kirby showed a lot of chutzpah laying out what many of us Christians have been thinking in silence.

We’ve long been irritated by self-identified Catholics like House Speaker Nancy Pelosi, who — in the name of “gender neutrality” — just recently moved to ban “gendered words” in the House rules and who has been a reliable vote in favor of abortion “rights.”

But now along comes Biden, hailed as only the second Catholic (JFK was the first) to ever grace the White House. According to CNN, he rarely misses Mass. His pal, Delaware Democratic Senator Chris Coons, recently told the outlet that “Joe’s faith isn’t just part of who he is. … It’s foundational to who he is.”

But while Biden is accepting the sacred body of Christ at the altar, his Cabinet is, as Kirby so aptly charged, is looking more like the anti-Christ, at least from the Catholic religion’s point of view.

There’s Ohio Rep. Marcia Fudge, his pick for secretary of Housing and Urban Development. She has lobbied to keep an Obama policy that requires federal government-funded shelters to house people based on their “gender identity,” including by allowing men who identify as women to be housed with women.

California Attorney General Xavier Becerra, Biden’s pick to run the Department of Health and Human Services, has previously filed suit against the pro-life Catholic group Little Sisters of the Poor in an effort to block a policy that would exempt them from the Obamacare contraception mandate, according to Fox News.

“Becerra spent years tormenting the Little Sisters of the Poor in court, trying to force them to pay for things like abortion pills against their consciences. He also led efforts to force pro-life pregnancy resource centers to advertise for abortion,” Ashley McGuire, a senior fellow at the Catholic Association, told Fox.

Meanwhile, Ron Klain, Biden’s White House chief of staff pick, likely wants to use the power of the federal government to crack down on what he derided in a 2019 Washington Post Op-Ed as “fetal rights.”

It was a good choice of words for a Catholic politician. Let’s see if Biden copies Kennedy (although Biden might not want to be careful about copying any more politicians).

Father Kirby said it best anyway: “Evil talks about tolerance until it’s in control. … Never forget that the only thing evil needs to succeed is for good people to remain quiet.”