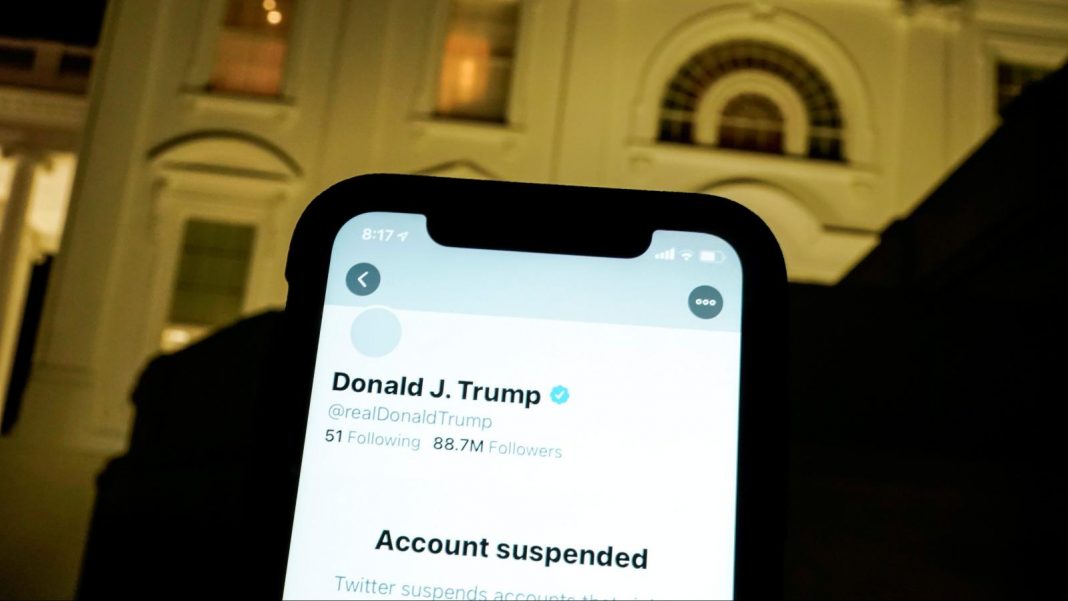 EDITOR’S NOTE (Nick Stamatakis): You know that something is very wrong in this country when foreign leaders (Germany, Mexico, Brazil, etc, most of which cannot be compared with our supposedly “advanced democracy”) and other personalities (from France’s foreign minister to Russia’s Navalny who was prosecuted by Putin) make statements supporting President Trump’s freedom of speech against Big Tech, while the American Left and their counterparts around the world stay silent.  For one thing, Angela Merkel was born and raised during communism and knows well what it means to live in a country without freedom of speech…

Suddenly, living in authoritarian Russia doesn’t sound that bad…  My congratulations to the American Left and their Big Tech supporters: they proved their undemocratic instincts for all to see.  And they will pay the price. First, Big Tech’s stock market value will fall to levels before 2016 (Twitter’s value tripled during Trump’s presidency) and then the Left will lose power for a very long time. Democracy will prevail in the end – have no doubt…

Angela Merkel is no fan of Donald Trump. She is, however, a fan of free speech. While much of the liberal world welcomes the news that the outgoing US president was banned by most mainstream social media platforms, Merkel finds the development concerning.

“The right to freedom of opinion is of fundamental importance. Given that, the chancellor considers it problematic that the president’s accounts have been permanently suspended,” said Steffen Seibert, Merkel’s spokesperson,

She isn’t alone. Other prominent political figures of all political leaning agree with her, from Mexico’s president Andres Manuel Lopez Obrador to Eduardo Bolsonaro (a prominent lawmaker and son of Brazil’s president Jair), to France’s economy minister, Bruno La Maire.

In some cases, the cause for such disagreement over the decision may include political support of Trump, or fear of similar treatment. But some of the issues raised concern the freedom of speech and the role of social media companies in guaranteeing it—or not.

What worried Merkel and other German representatives, for instance, wasn’t the ban per se, but the fact that it came, without much transparency or clear due process, from the leadership of social media companies and not according to legal intervention.

Merkel’s is a reasonable concern, but not one that is so easily applied to the legal reality of the US, says Dia Kayyali, a Germany and US-based expert in surveillance and content moderation, who leads advocacy for Mnemonic, an organization supporting human rights including through moderation and documentation of digital media content.

Removing someone from social media, especially for political speech, should indeed follow a specific legislative path, Kayyali says, but this path is simply not available in the US. Most countries impose certain limits on freedom of speech—Germany, for instance, specifically regulates hate speech online—but in the US, freedom of expression, as enshrined in the first amendment, is all but unlimited.

“In the US, this idea of the first amendment is so strong that there hasn’t been much action in regulating platforms,” says Kayyali. The interpretation of what constitutes incitement of violence, for instance, is too narrow and outdated to account for the reach and reality of social media, and should therefore be reinterpreted, Kayyali says.

This legislative hole leaves it to the tech giants to regulate themselves, even though they are not legally liable for any content published on their platforms. Similarly, social media platforms and other digital publishing channels are largely free to moderate content they consider inappropriate, even when it is protected by the first amendment. They have not traditionally done a good job of it, often failing, or even refusing, to moderate conversations or suspend accounts.

When it comes to Trump, Kayyali thinks big tech has done too little, and too late, allowing him to post freely even as his messages grew more incendiary, violating the platform policies (chiefly, that of Twitter, which doesn’t allow posting hateful content).

A precedent for what?

Social media bans can be an effective method to counter violent movements. When Twitter suspended pro-ISIS accounts, for instance, it helped reduce the organization’s traction. But leaders also fear Trump’s ban might soon become a precedent that is applied arbitrarily, especially in response to political, social, or financial pressure.

This concern should guide what is required of social media companies in order to improve the way they handle speech, even in the absence of a specific legal framework (such as in the US) or in contexts where the law doesn’t protect free speech.

First, says Kayyali, not only should social media companies be transparent in how they ban or suspend users, but, where possible, legislation should demand that they do so. Further, the focus should not be only on the US. In a world where Donald Trump is banned from social media for inciting hate, so too should be Philippine’s president Rodrigo Duterte, or many members of India’s political elite who promote communal violence.