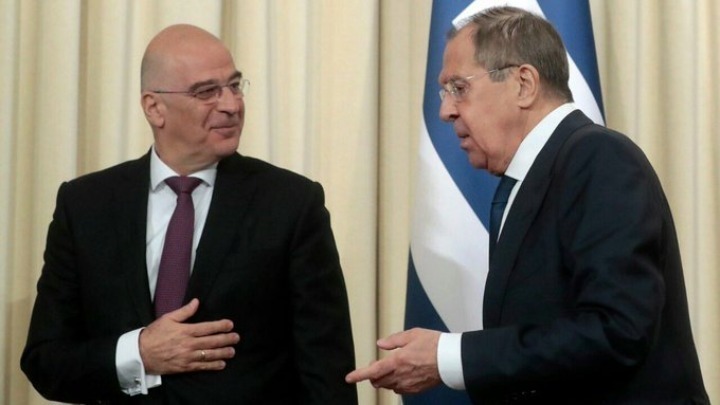 EDITOR’S NOTE: Russia’s Foreign Minister Sergey  Lavrov, justifiably considered the most accomplished diplomat internationally, made two significant statements regarding Greece this week.  In the first one, he reinstates the self-evident truth: Greece is the ONLY country in the world that has not expanded its territorial waters to 12 miles and it has every legal right to do so. In the second one, he reiterates Russia’s complaints about the destructive policies of the Constantinople Patriarchate in the Ukraine which led to the Schism in Orthodoxy…

In a statement today, Lavrov said “following from the 1982 Convention on the Law of the Sea that each state has the right to determine the extent of its territorial waters up to 12 miles.”

“When Greece announced that it was expanding the coastal zone, we said exactly this: it is a completely legal decision,” the Russian foreign minister continued.

“When the territorial waters defined by a state are contrary to the interests of a neighboring state and these interests are legitimate under the Convention on the Law of the Sea, solutions must be sought through dialogue and balance of interests,” he said.

“We actively call for all problems related to the Exclusive Economic Zones of both Greece and Cyprus to be resolved through dialogue,” he added.

Lavrov then comments on the upcoming exploratory talks between Greece and Turkey to resolve the maritime issue, that are not expected to produce any major results.

“We believe that this is a very good way in which problems should be discussed and resolved. Of course no one wants military operations in the Eastern Mediterranean,” the diplomat said.

“If Russia can be useful in anything, to take advantage of its good relations with the countries involved, we are ready, if of course we are asked to do so,” the foreign minister offered.

Speaking away from Greek-Turkish issues, Lavrov then commented on the close ties that Greece and Cyprus have with Russia.

“Russia has very warm, close relations and spiritual ties with Greece and Cyprus,” he said.

“I recently visited Greece, I had a telephone conversation with the Minister of Foreign Affairs of Cyprus. I see no reason why these countries could be convinced that Russia is their adversary or pursue an unfriendly policy,” he added.

He then commented how Washington is attempting to push Greece away from having relations with Russia.

“The Americans are trying to persuade them, but sensible politicians see the whole background, namely that the goal is to cultivate the image of Russia as an enemy. There is no diplomacy in this, but the raw public coercion,” Lavrov explained.

“U.S. diplomats in any country serving in violation of all the rules do not hesitate to openly call for an end to cooperation with Russia,” he concluded.

It is recalled that Russian President Vladimir Putin will visit Greece in March to celebrate the 200 year anniversary of the Greek Revolution against the Ottoman Empire.

Russian Foreign Minister Sergei Lavrov spoke about the developments in the Ukrainian autocephaly in a press conference, noting that Constantinople Patriarch Bartholomew has a mission to “bury the influence of Orthodoxy.”

The United States is working to neutralize the role of Orthodoxy in the world, said Lavrov, referring to Patriarch Bartholomew.

“His mission, obviously, is being prepared by the Americans and they do not hide that they are actively cooperating with him, using the slogan of ‘freedom of religion and belief’,” he said.

“Bartholomew’s mission, obviously, is to bury the influence of Orthodoxy in the modern world,” Lavrov continued.

“I just do not see any explanation for this man’s action,” he said during a press conference, likening his actions to “Pandora’s Box.”

Regarding Ukraine’s autocephaly, or independence from the Moscow Patriarchate that was signed off and recognized by Constantinople, Lavrov stressed that the Americans pushed Bartholomew to follow the path of schism, undermining centuries-old traditions.

It is recalled that Bartholomew awarded autocephaly to the Ukrainian Orthodox Church – Kiev Patriarchate (UOC-KP), headed by Epiphanius.

In particular, the Moscow Patriarchate, describing the developments, has spoken of “legitimizing the schism”, stressing that it could have catastrophic consequences and affect the lives of millions of Christians in Ukraine and elsewhere.

Recently, the head of the Department of Foreign Ecclesiastical Relations (TEES) of the Moscow Patriarchate, Metropolitan Hilarion of Volokolamsk, spoke of a “political plan aimed at weakening the Russian Orthodox Church.”

In speaking to Rossiya 24, he also referred to the role played by Bartholomew, noting that “direct and leading participation was the Patriarch of Constantinople Bartholomew, who relied and still relies on the US government power structures.”